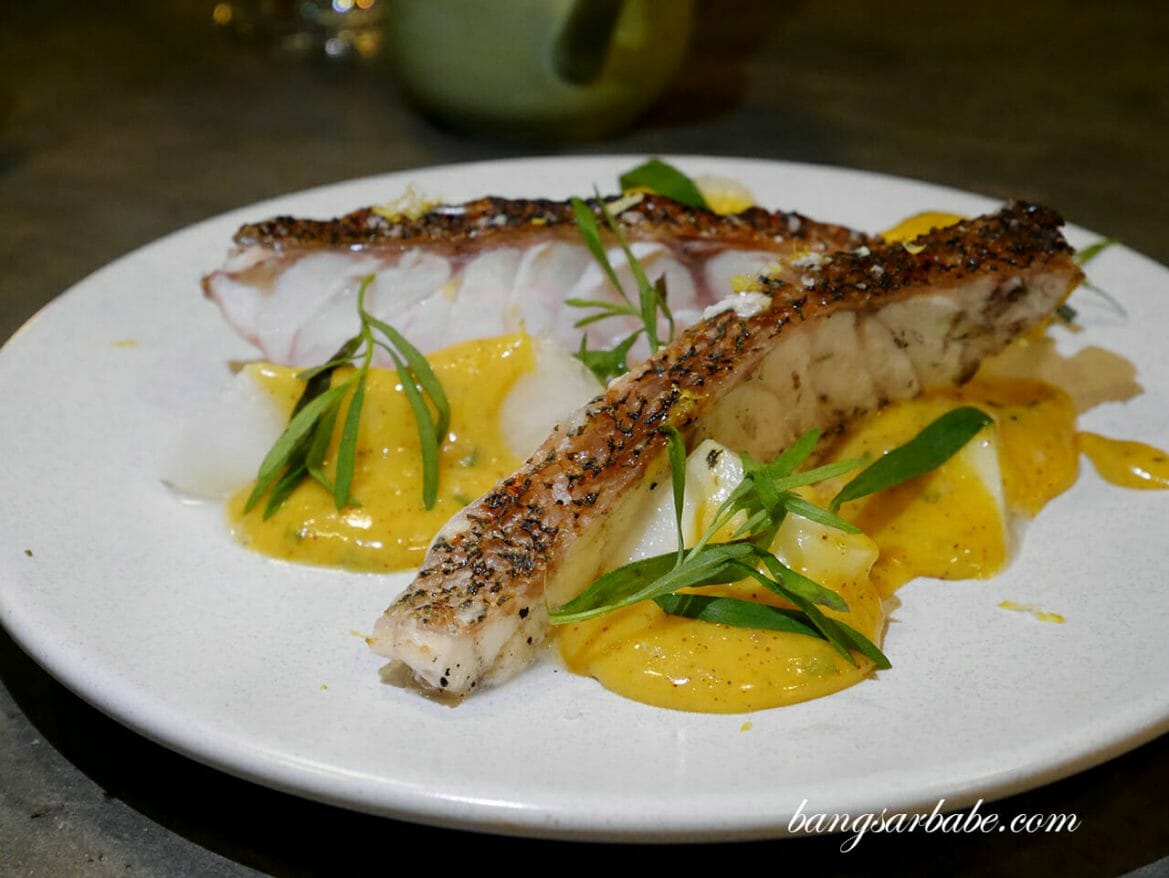 Getting a spot at Atelier Binchotan in Taman Desa is akin to winning a lottery, one that I scored out of luck. I soon discovered that one’s difficulty in securing a spot is due to the lack of space in the restaurant. Atelier Binchotan only fits 12 pax per seating and during MCO when I went, there was an 8 pax limit. 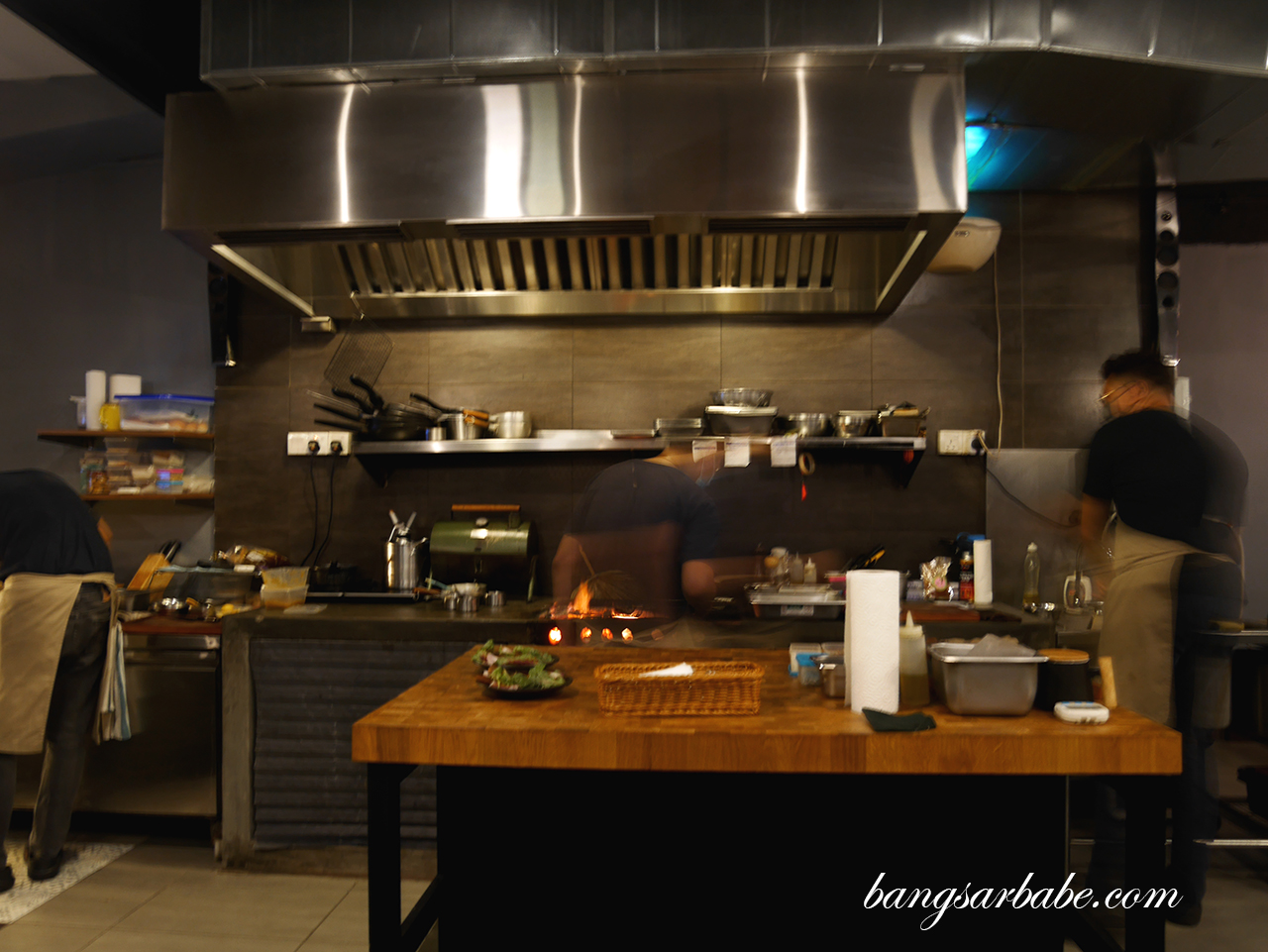 The restaurant is no-frills. No ornate decorations or table setting – just a huge kitchen for diners to see their food preparation up close. Cooking is done by Kar Hong and his team, with Kar Hong being predominantly in charge of flavour control and cooking quality. 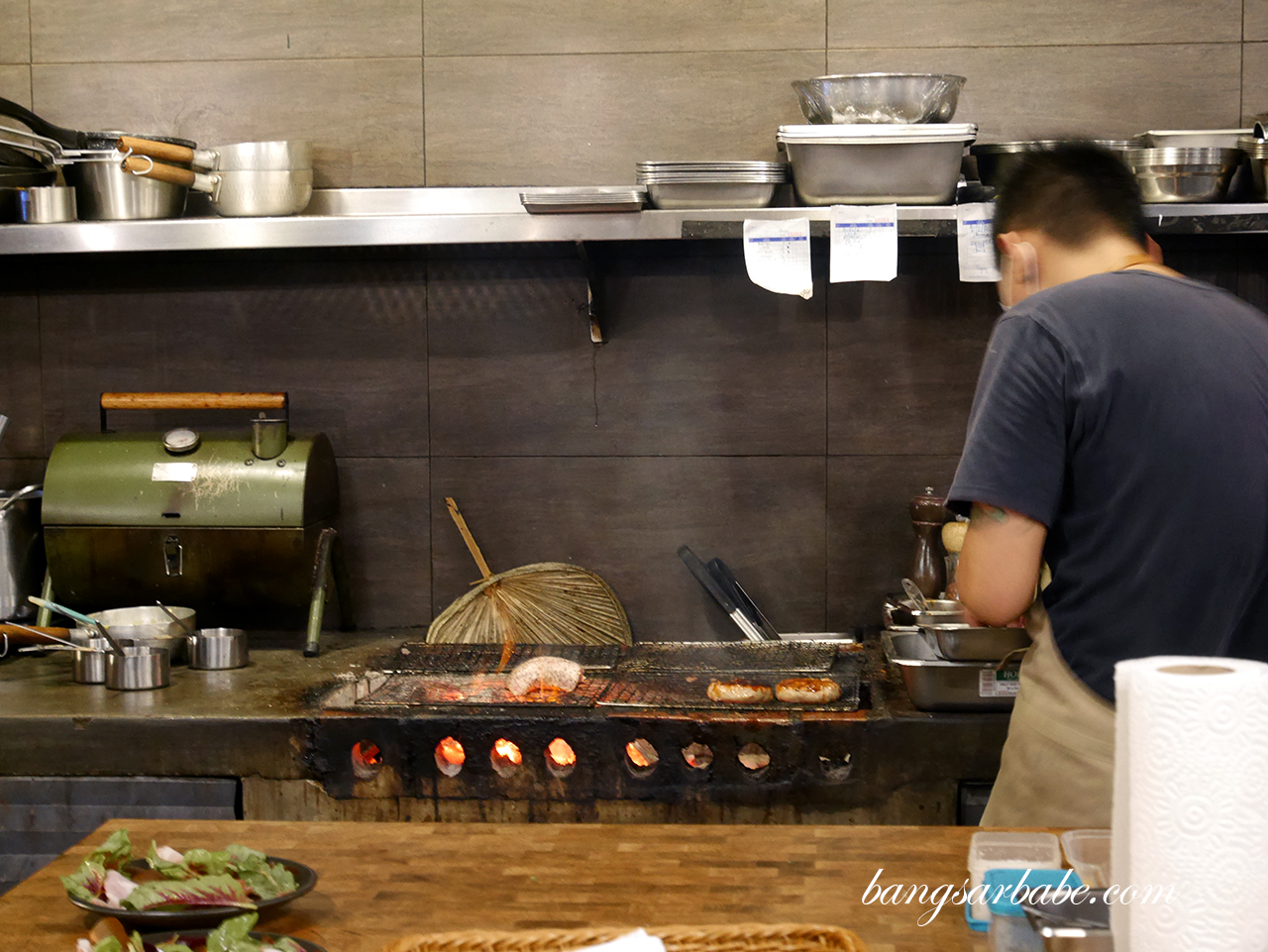 You can watch your food prep, up close

Using binchotan charcoal is a practice among world renowned chefs, which is odourless (compared to lump charcoal) and allows diners to enjoy the natural flavours of the food. But what I like about dining at Atelier Binchotan is that it’s zero pretence. Mainly substance. 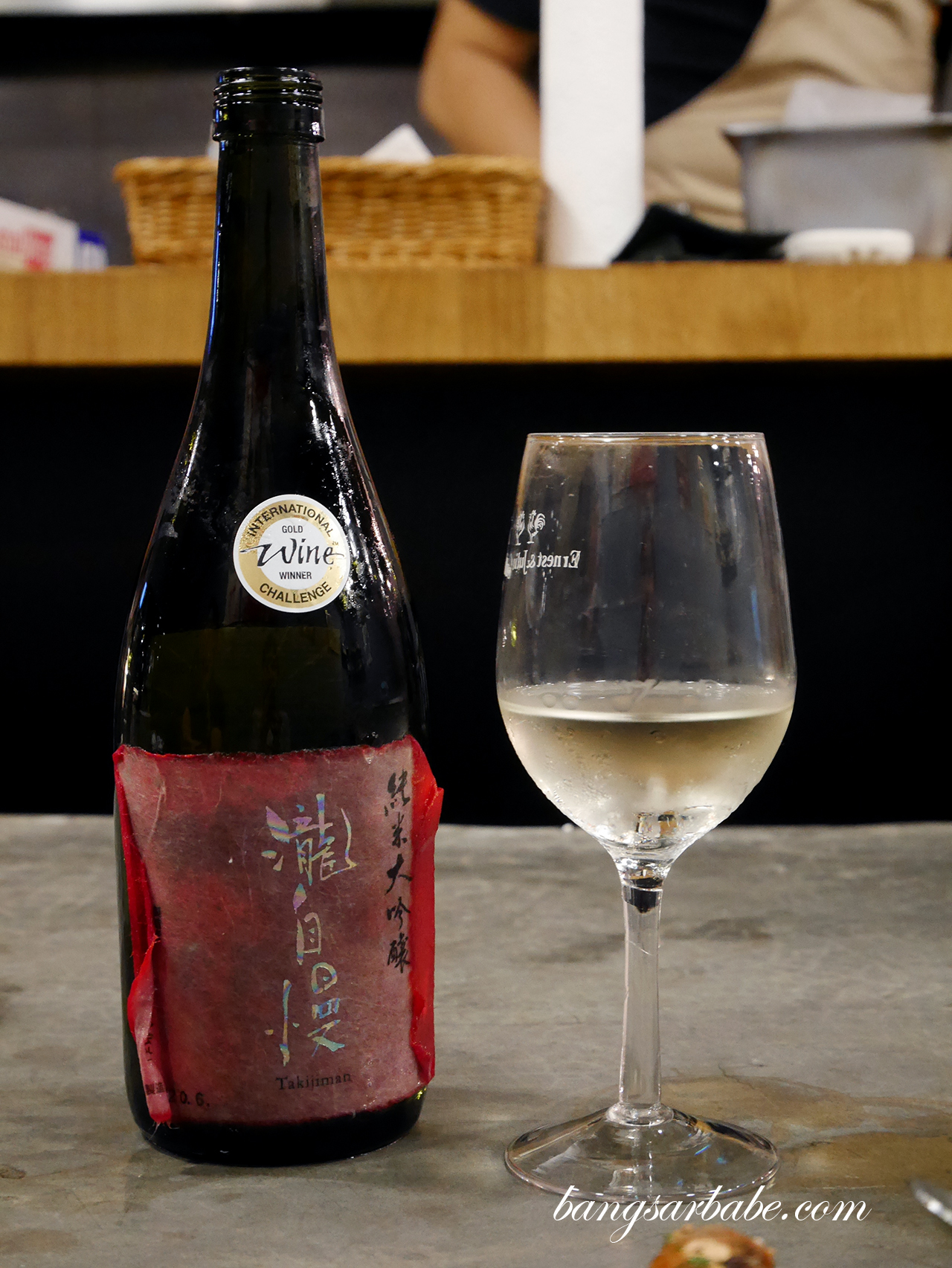 Corkage fee is RM40, if you’re planning to bring your own bottle.

It makes me feel almost at home. And the team isn’t hiding behind façade or service (no crumbing table or cutlery change after every course). The food at Atelier Binchotan may look simple, but pack flavour and char, in a good way. 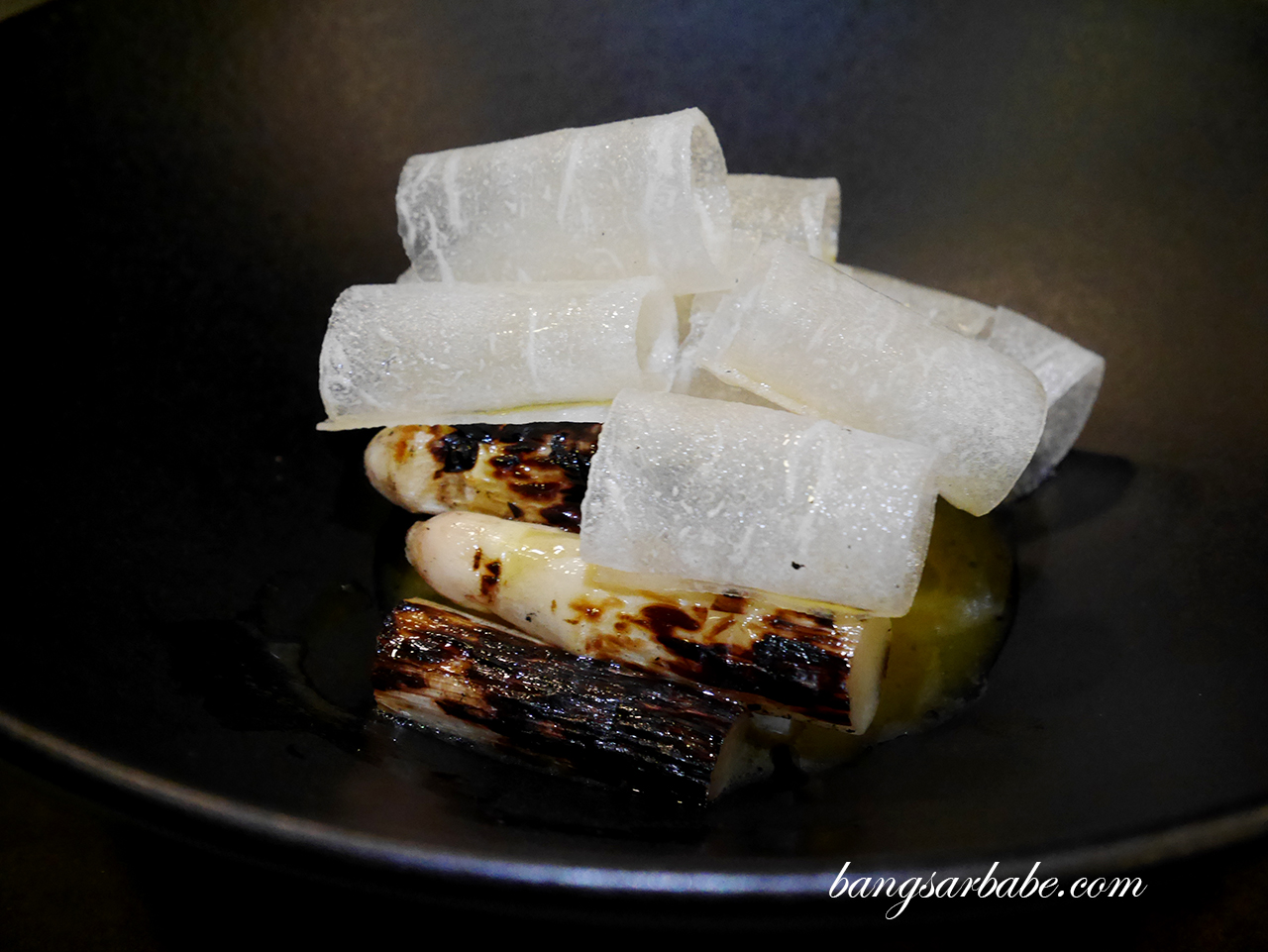 We had the Australian white asparagus (RM70), cooked carefully over the grill and served with melon shavings and mirin dressing (tasted like Beurre Blanc to me). Light, fresh flavours and a lovely char around the exterior of the asparagus. 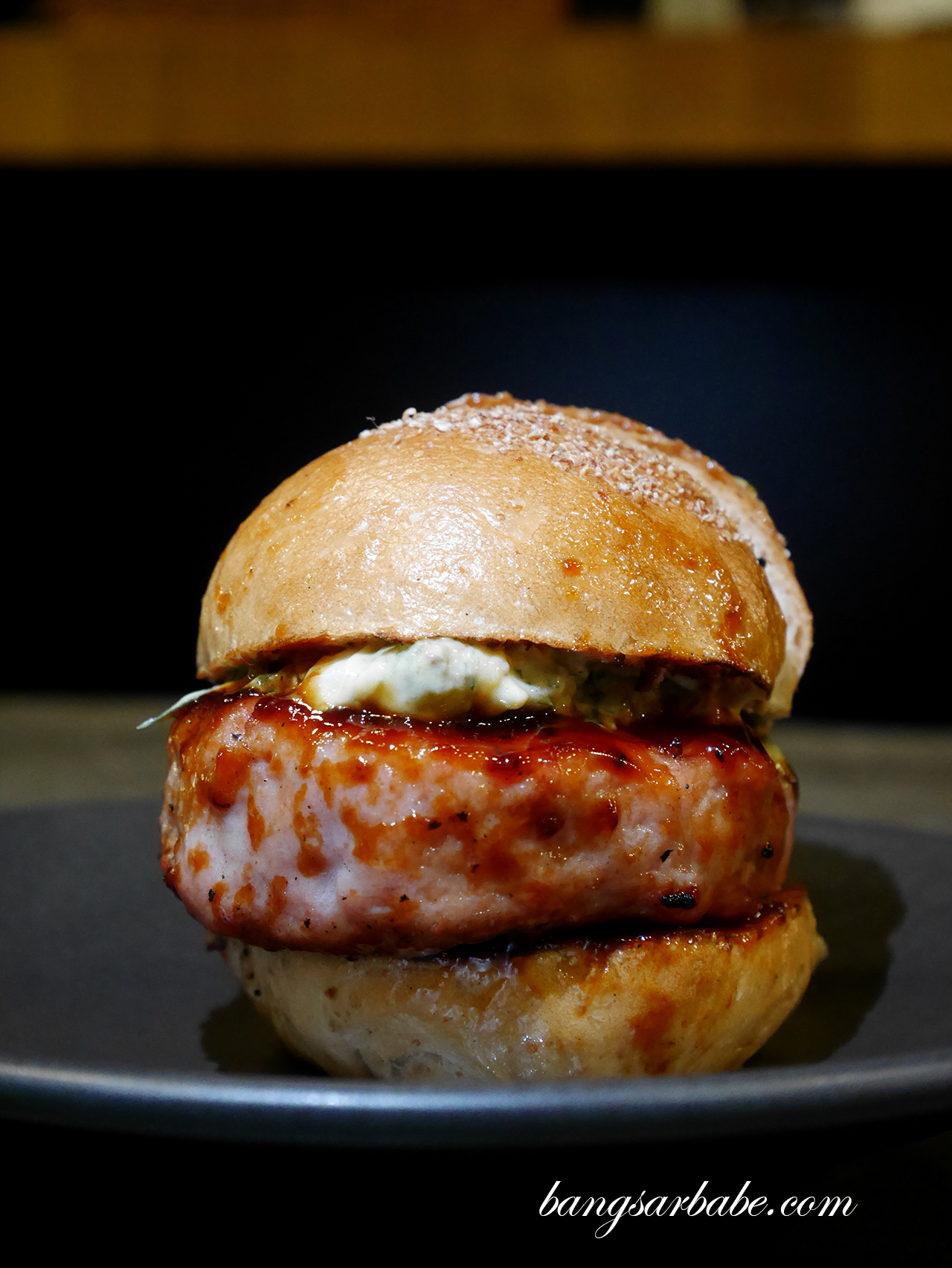 Honestly speaking, I liked the asparagus better than their sought-after mini burger (RM15). Which I feel is delicious but doesn’t really give credit to the chef’s skill. The burger patty was tad too compact for Jien and myself, though I must say – the char on it is amazing. Also, it’s really juicy which is a plus point. 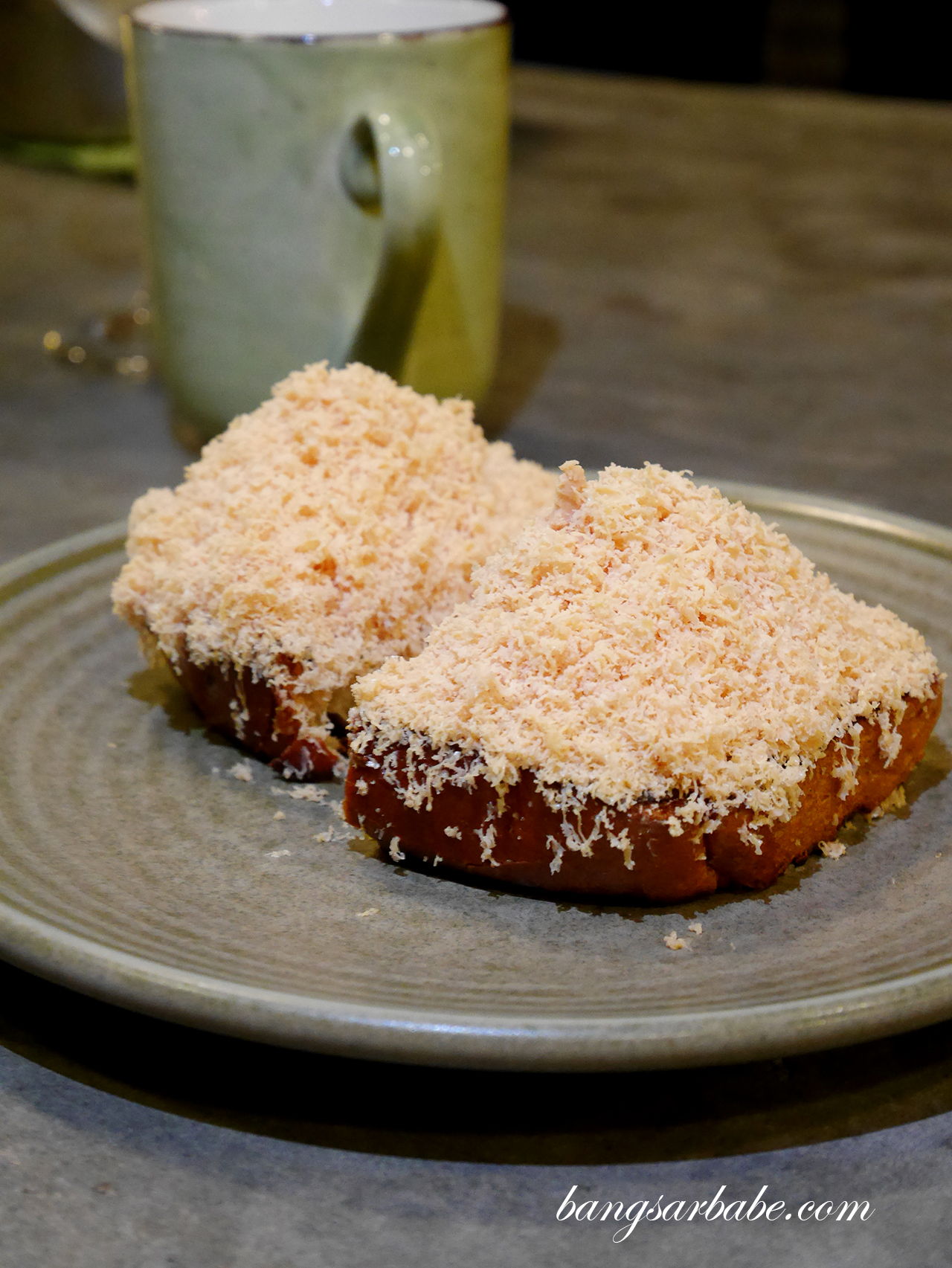 The kaya toast (RM30) showcases brioche slices, grill-roasted and then topped with kaya and foie gras shaving. This one, we really enjoyed as the combination of kaya on (butter) brioche goes well with foie gras, its umami and fat. 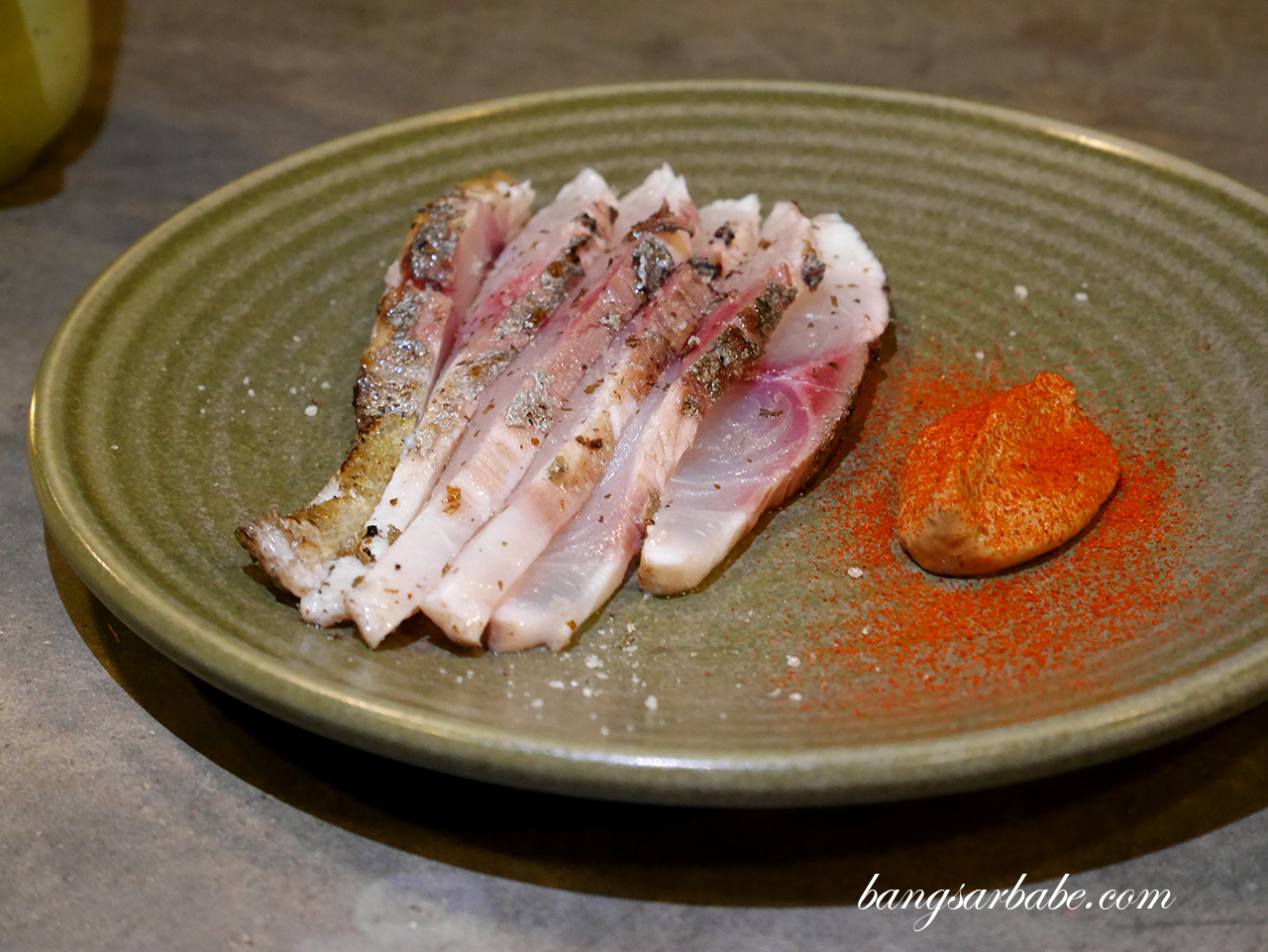 Shima-aji (RM60) is served with tomato jam and a sprinkle of kelp salt. This was one of my favourite things at Atelier Binchotan as the fish is carefully cooked on the grill, resulting in a lovely char around the edges but the centre remains raw. 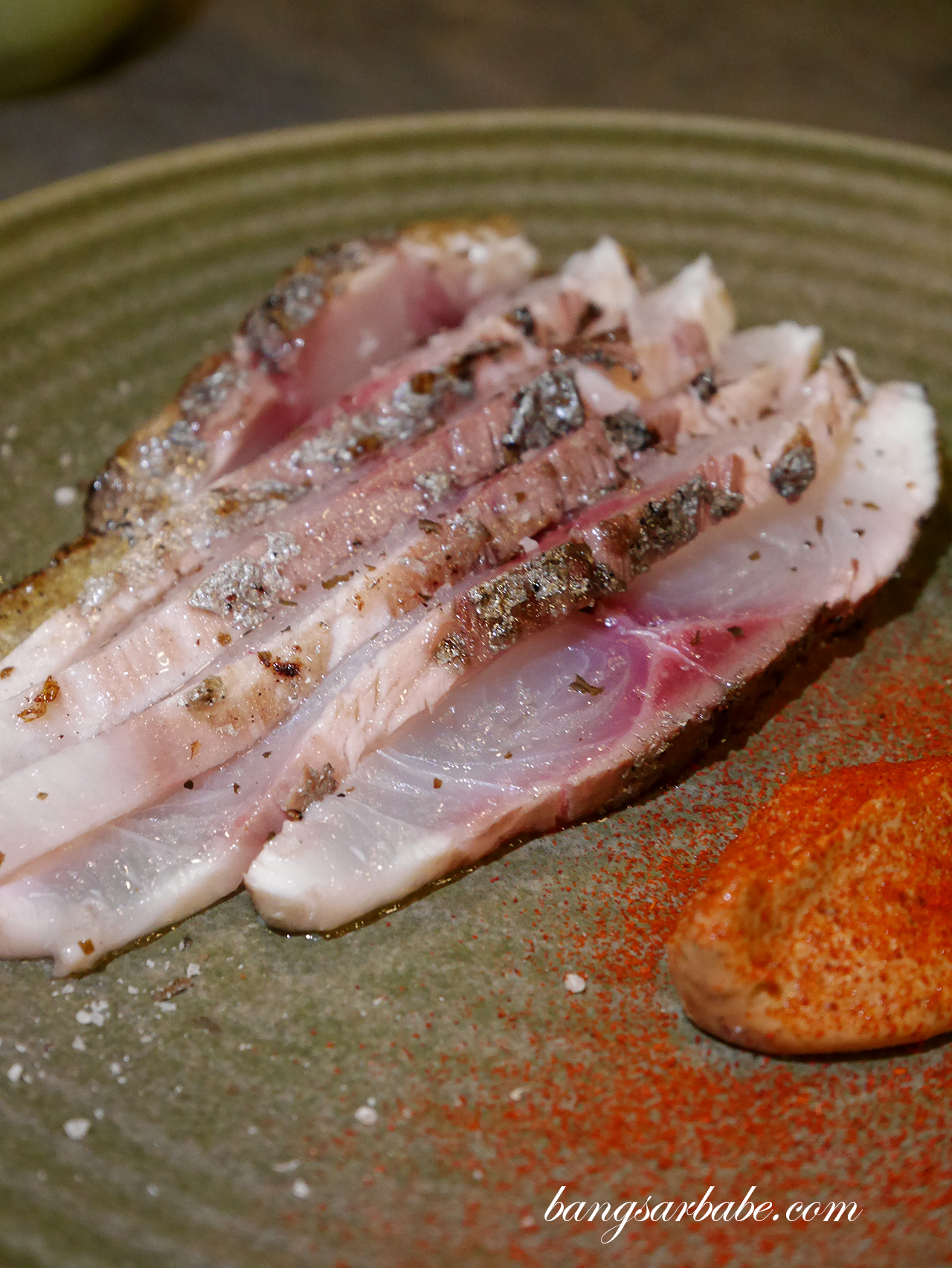 To achieve this – one must have a lot of skill and understanding on heat control and the ingredients they are grilling. And the team at Atelier Binchotan proves supreme. Amazing cook on the fish and the condiments may seem simple but hits the right spot. And that sprinkling of salt is just the elevation of flavour this dish needs. Something I noticed a lot of restaurants lack (the salt bit). 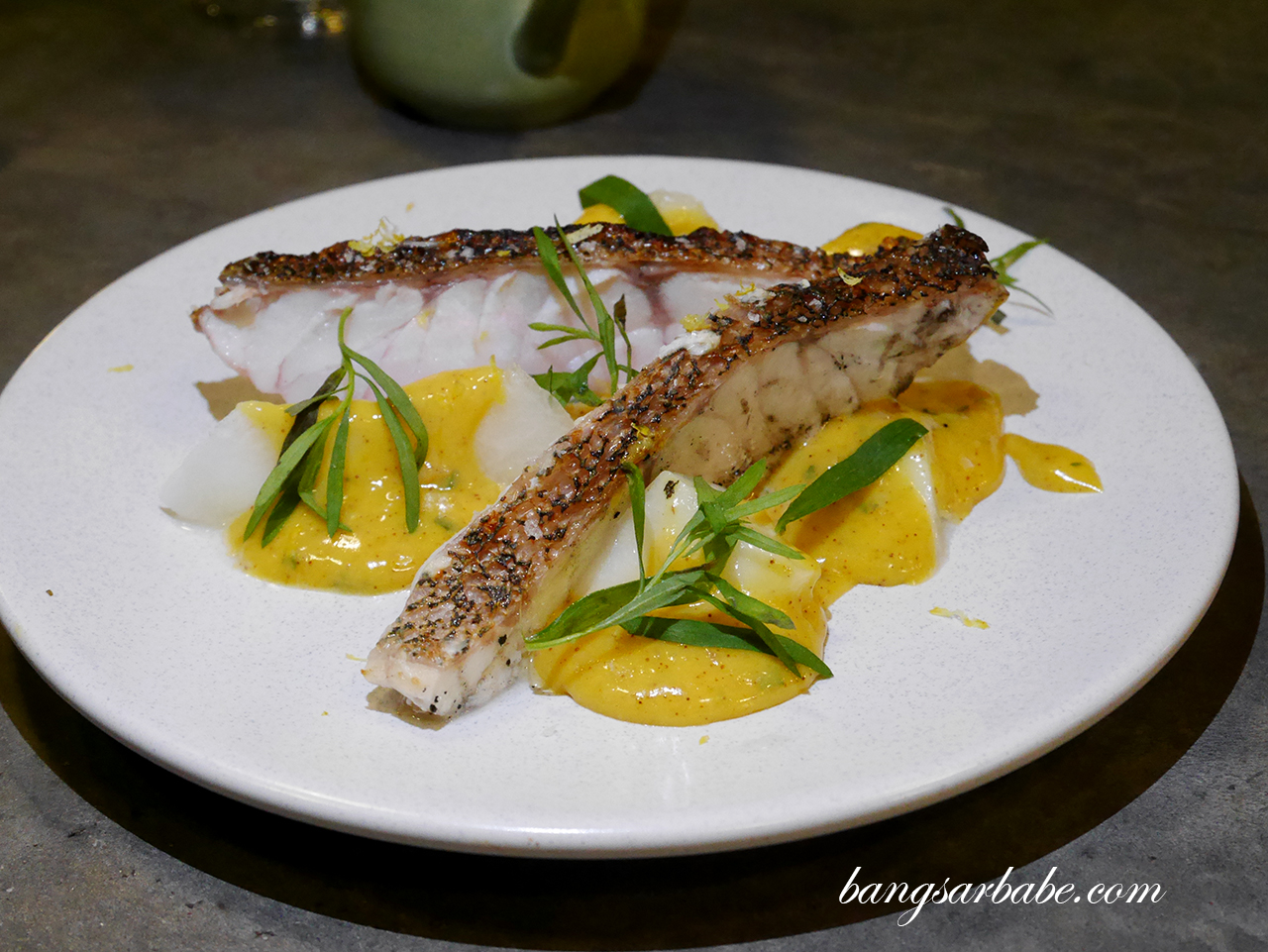 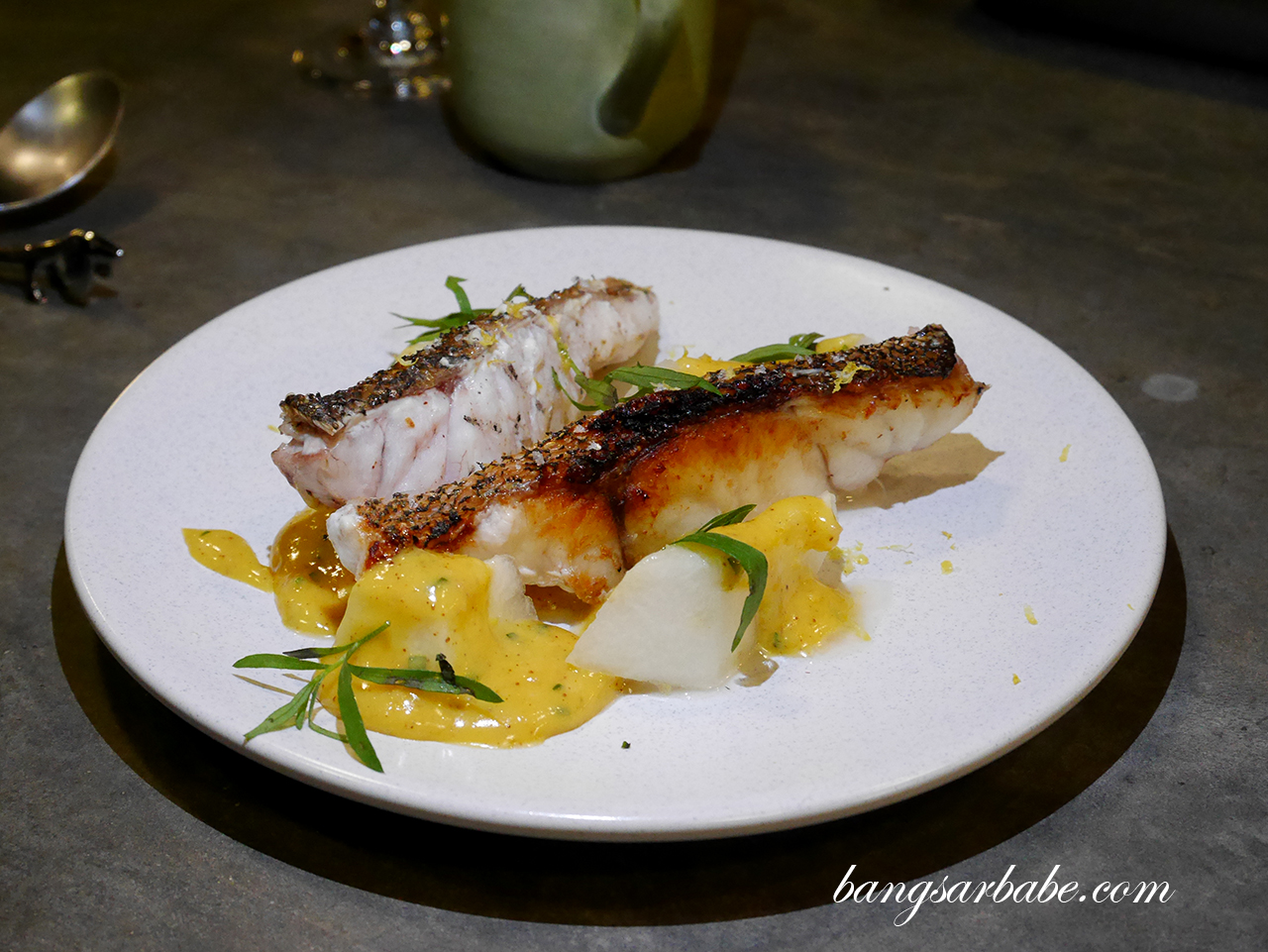 I also enjoyed the Tiger Grouper (RM65), served with burnt butter Hollandaise and rock melon. I initially thought it would be too sweet for my liking, but this combination works. The crack of salt on the crisp fish skin was just the right amount to bring out the flavour of the grouper. 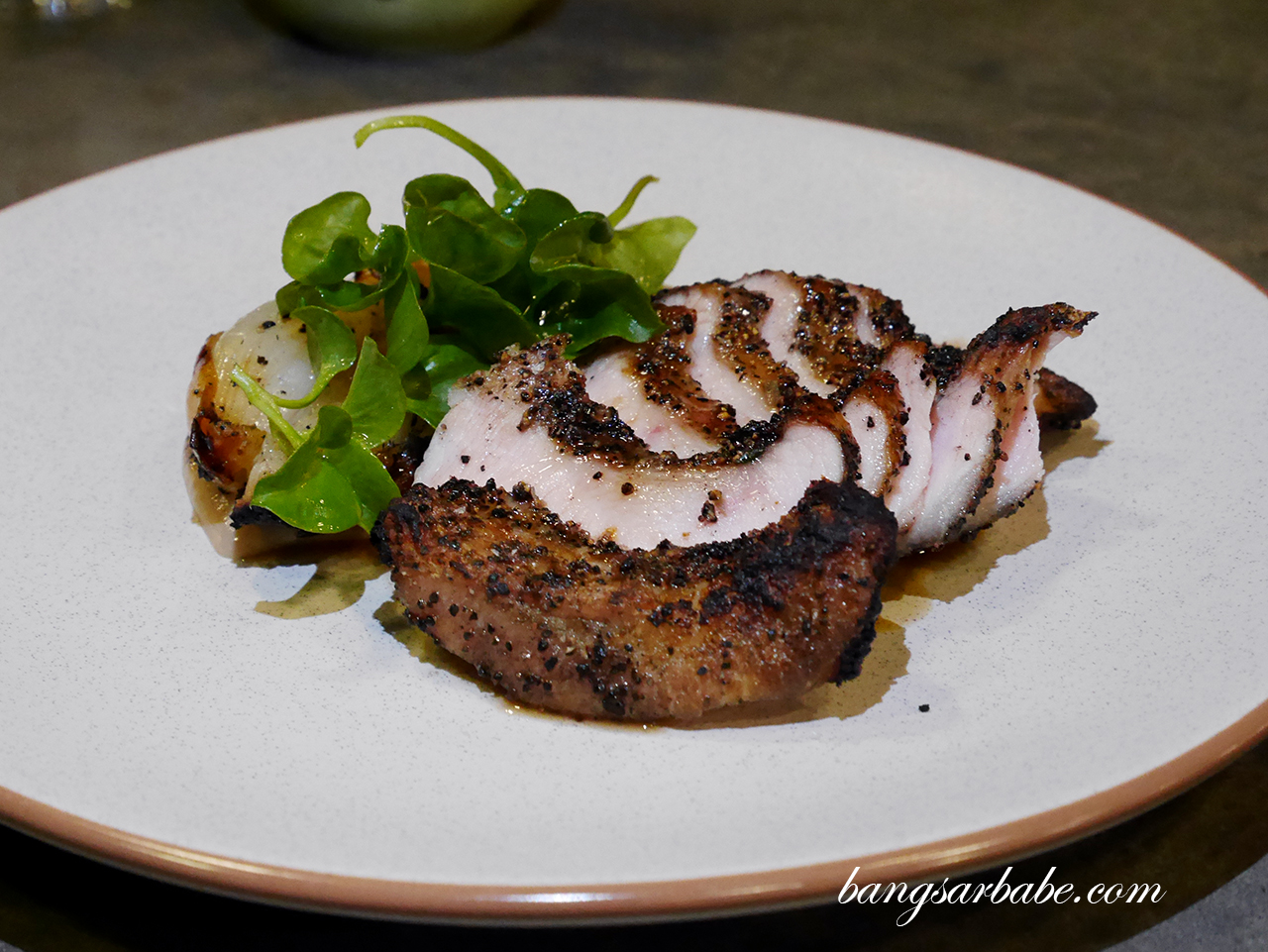 For meats, we had the Pork Cheek (RM60) and New Zealand Lamb Rack (RM90), both nicely executed. I really like the char both meats had – it’s the kind of crust that’s even on all sides, understated in colour, but a real game changer when you sink your teeth into the meats. 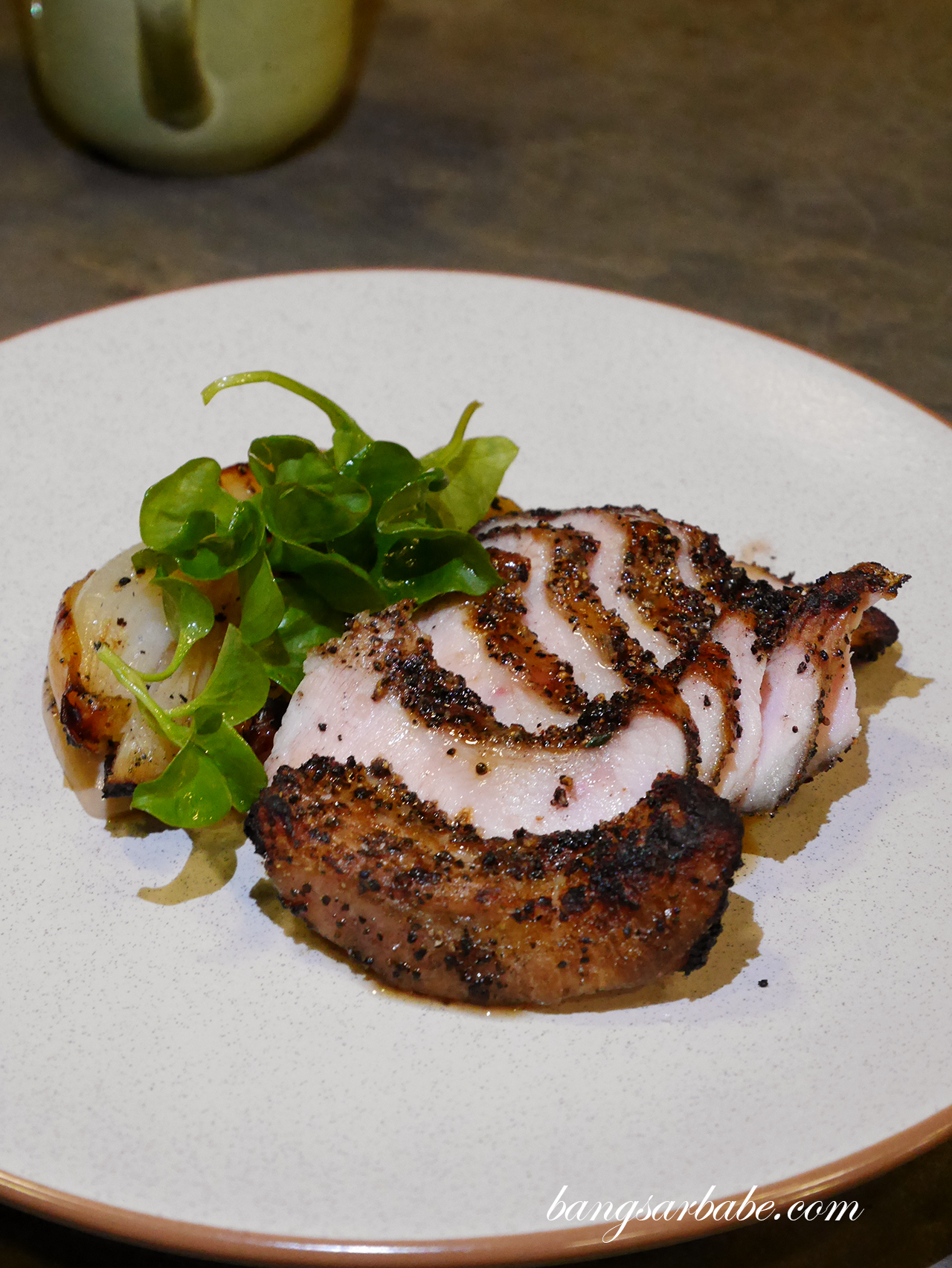 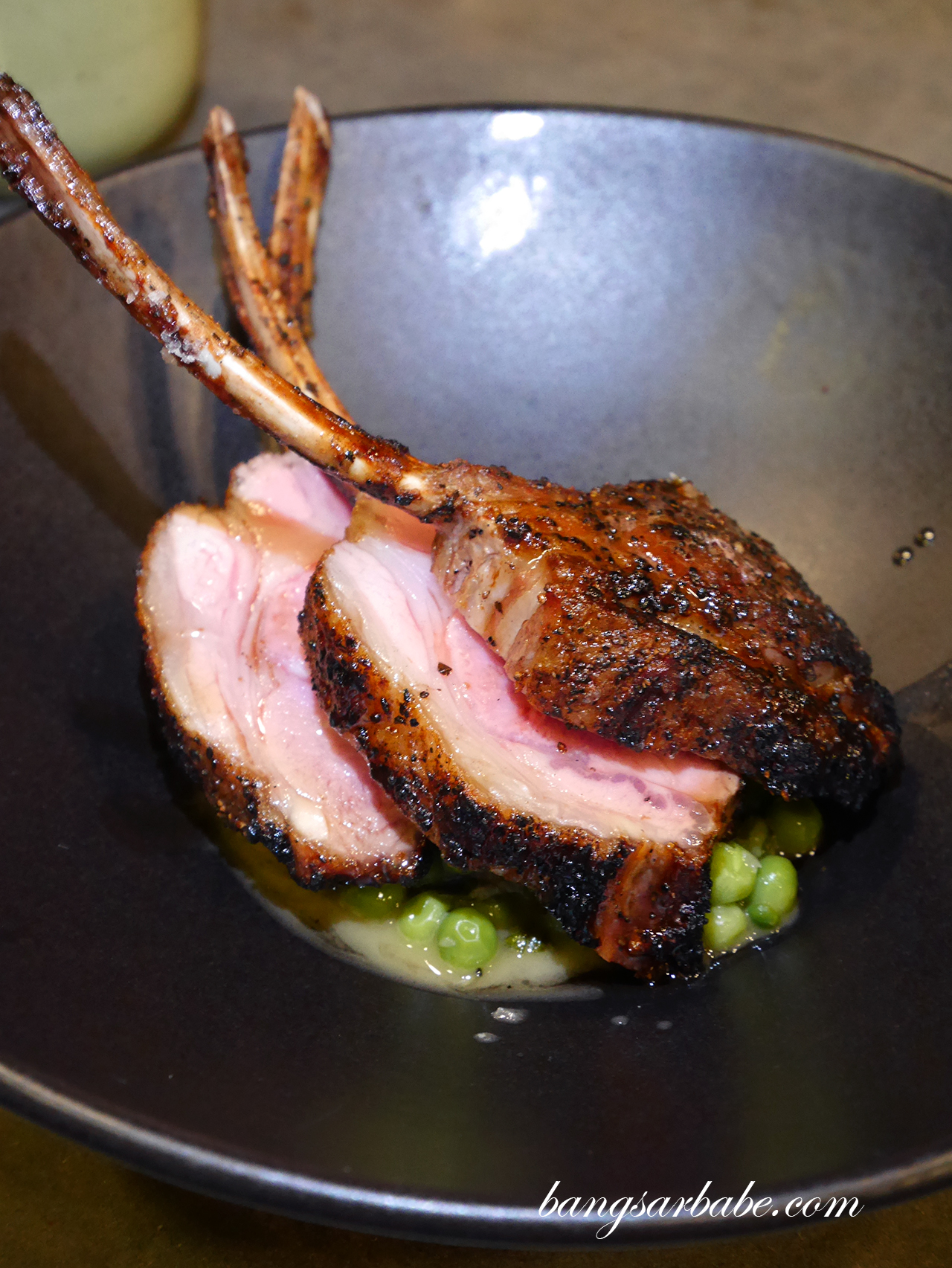 New Zealand Lamb Rack | I love the cook on this lamb rack. Evenly charred on the outside and a nice pink at the centre.

That green pea Chimichurri paired well with the lamb. I half expected it to taste like mushy peas, but it was almost like a stew and the peas were still whole in shape. This cut through the richness of the lamb, which I didn’t mind to begin with. 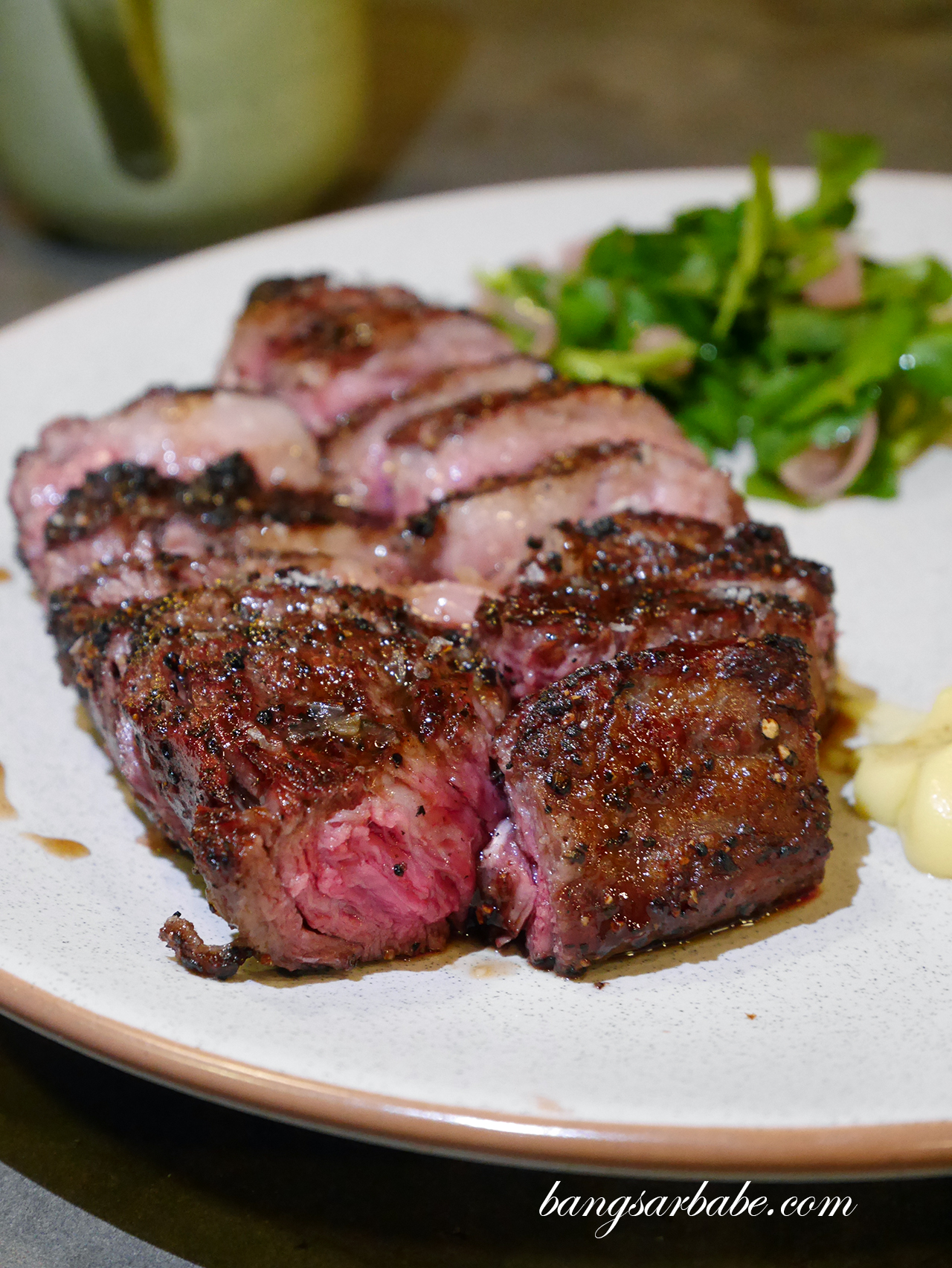 Jien and I decided to go all out with ordering since it took us so long to even get a table at Atelier Binchotan. So despite being rather full, our “itchy mouths” soldiered on, with the Sabah King Prawn Paella (RM120) and Australian Angus Rib Eye (RM70 per 100gm). 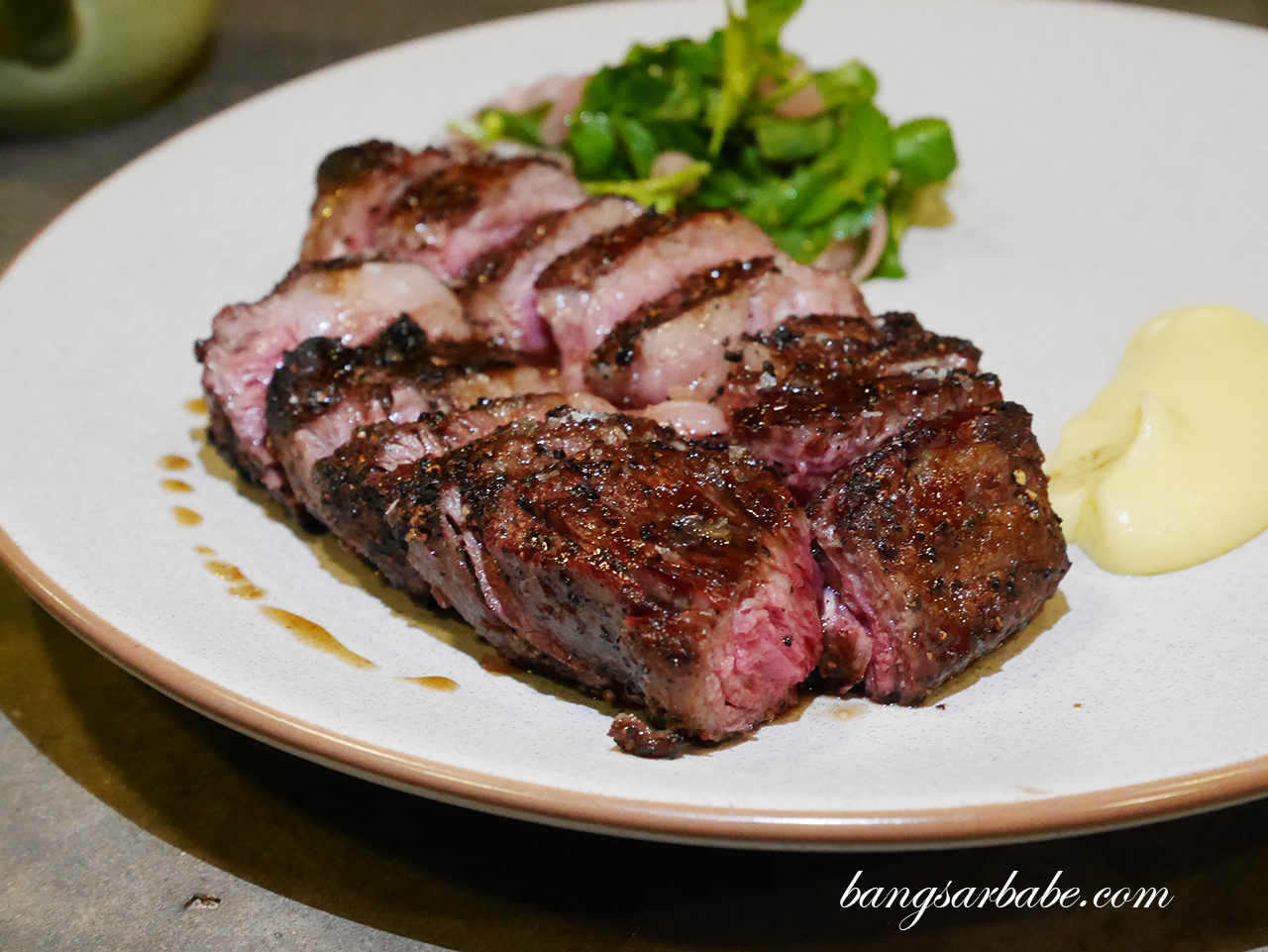 The cook for the ribeye was spot on. I don’t think I’ve tasted a better Black Angus than the one at Atelier Binchotan. The Sabah King Prawn Paella had a nice crust at the bottom of the claypot – I like that it’s an evenly cooked (charred) crust and not the kind where you need to scrape the pot aggressively for those crunchy bits. You know, like those claypot chicken rice places. 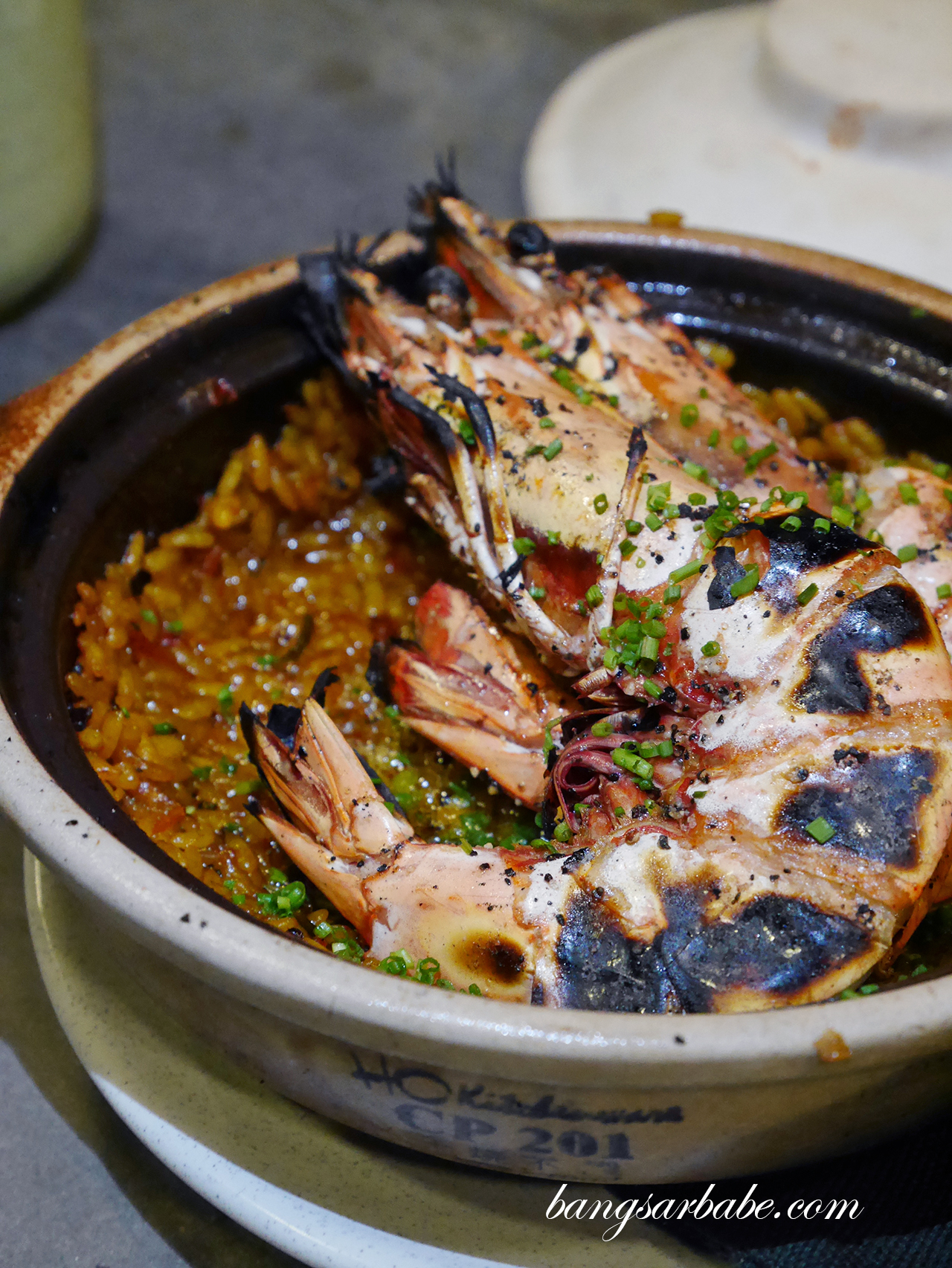 This one required a bit of scraping still, but you get crispy rice bits and no bitter, burnt parts. And the prawn was juicy and sweet with a smoky aftertaste from the cooking process. This, you should order if you love seafood. 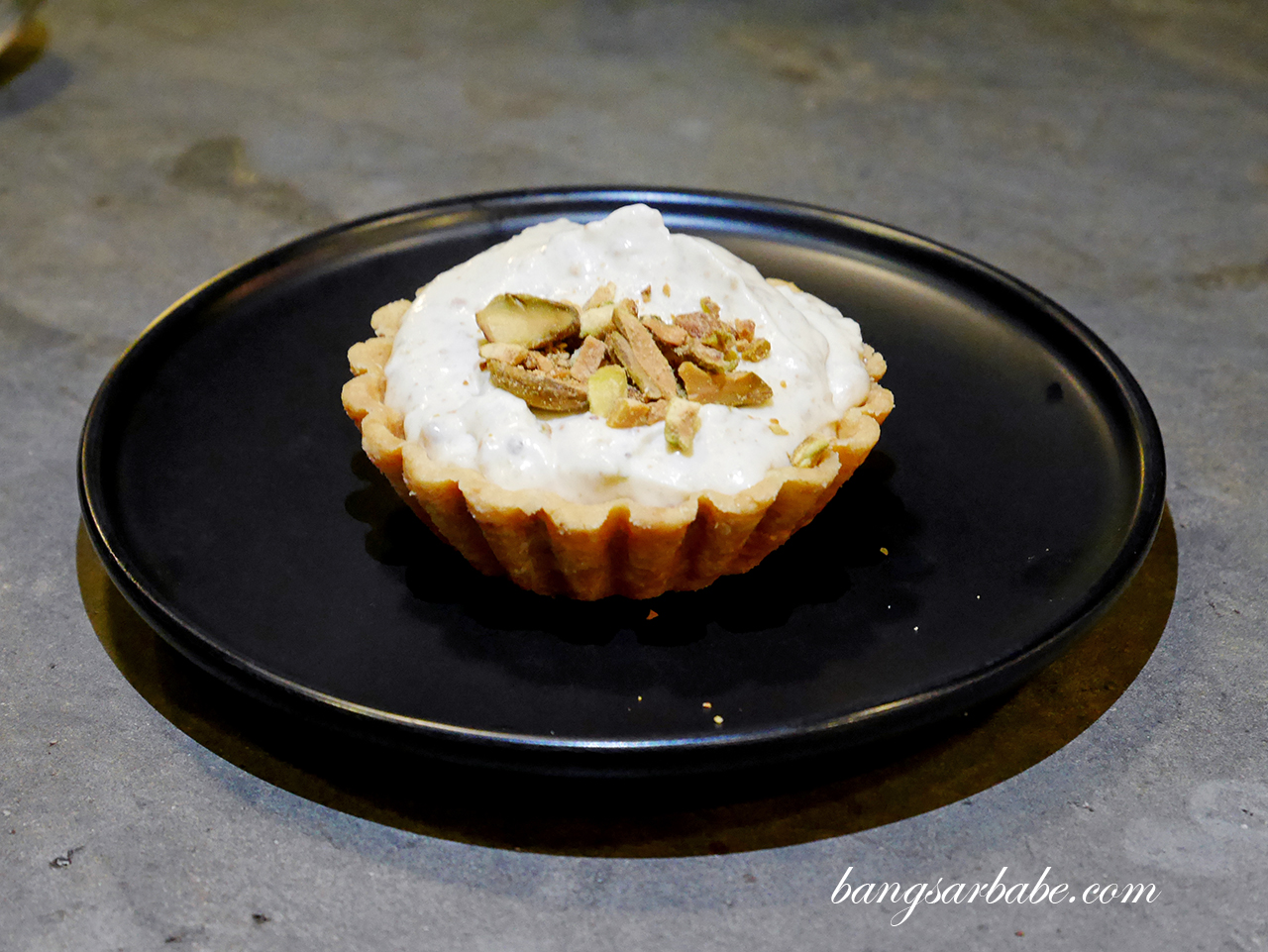 A pistachio and cherry tart (RM12) marked the end of dinner. Light buttery crust and a sweet, nutty centre. Nothing spectacular, but a refreshing finish. Overall, I really enjoyed the food at Atelier Binchotan. I reckon it’s my kind of dining scene – zero pretence, just straight up good food. 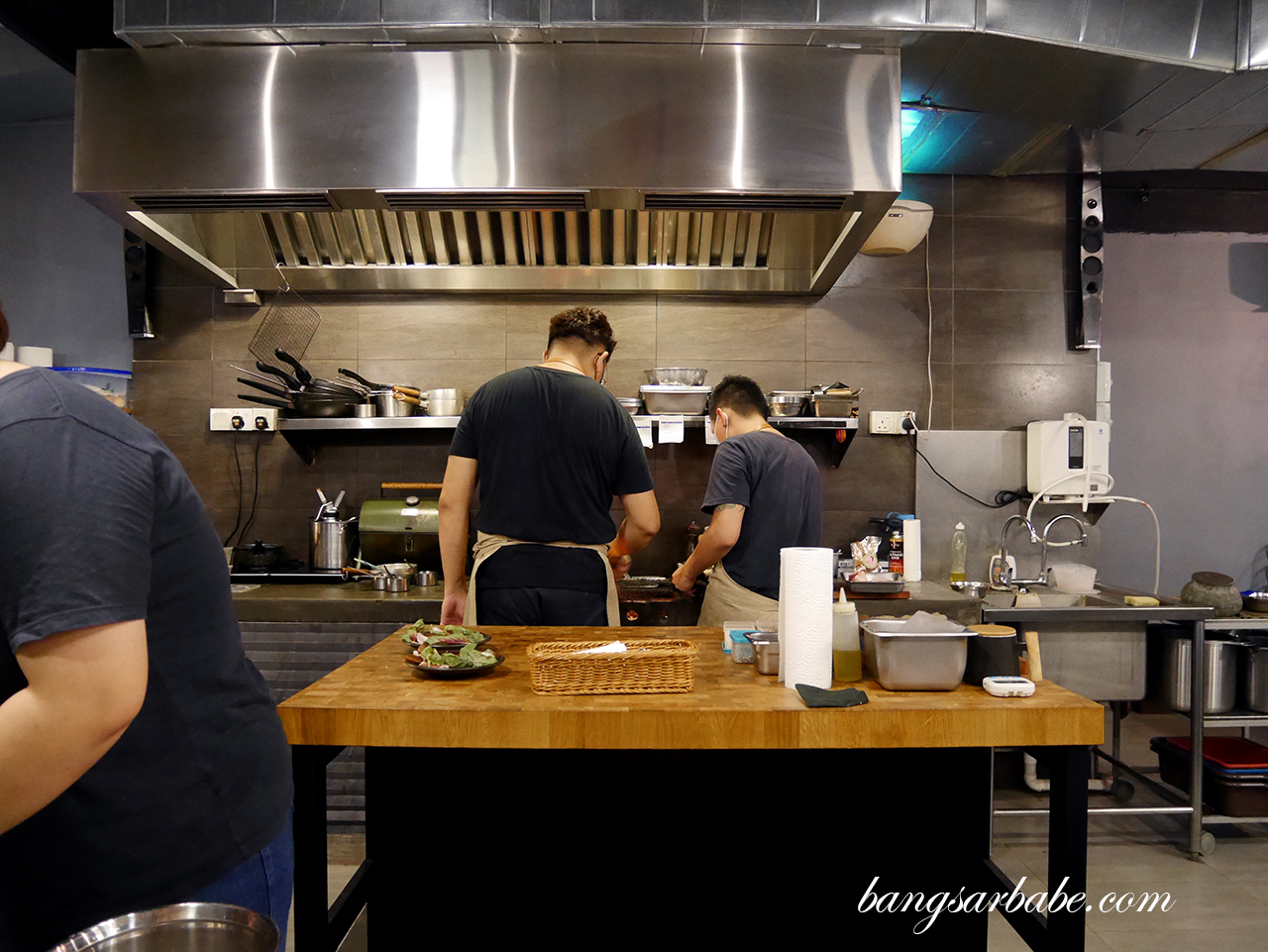 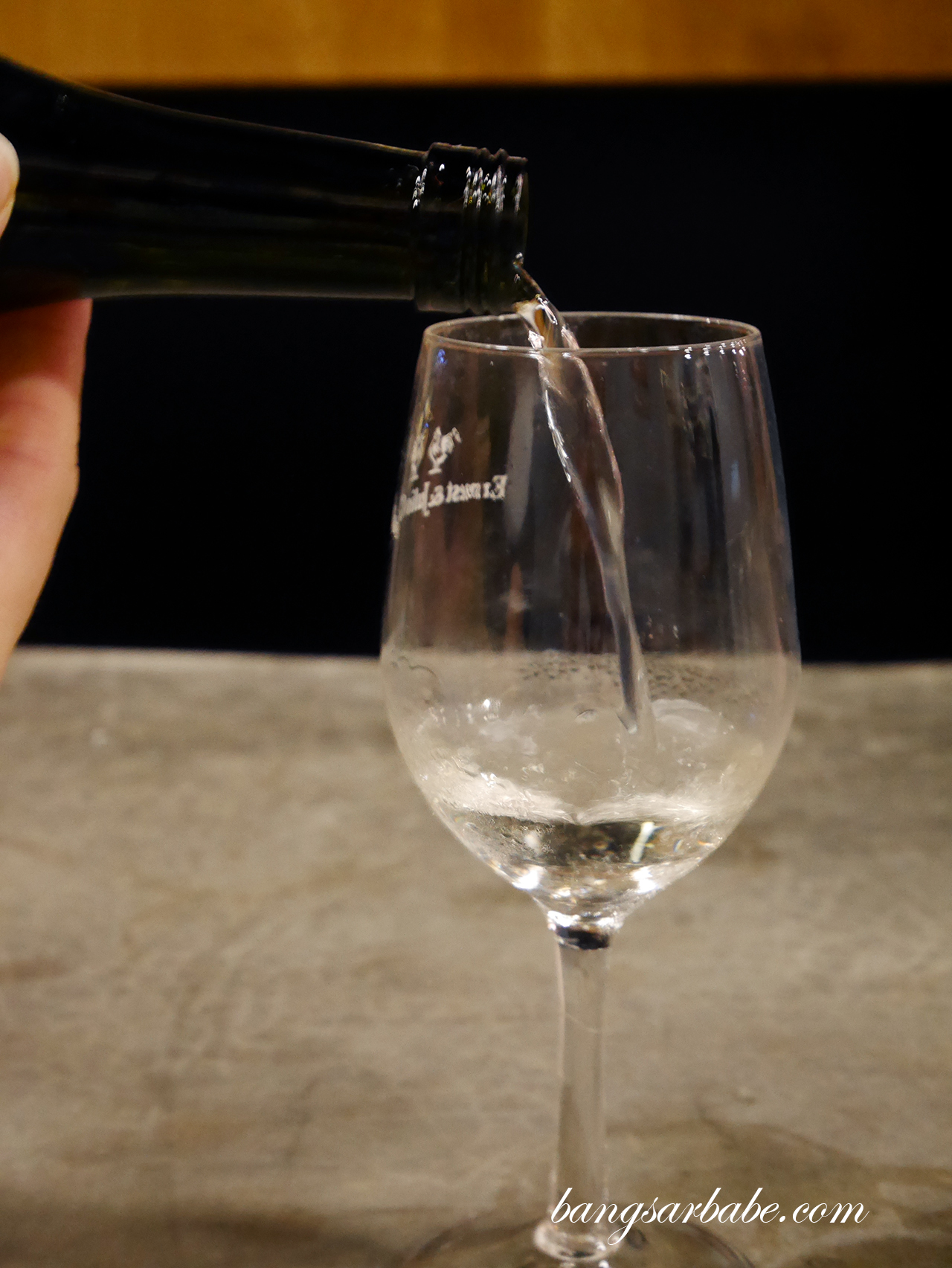 If you manage to book a spot, take it from me. Order everything you want. Else you might have to wait another 6 months for an open slot. We paid slightly over RM900 for all the above. Pretty reasonable considering the amount we ordered. Corkage is RM40 per bottle if you’re planning to bring your own.

Ambiance: 6/10
Price: 6.5/10
Food: 8.5/10 (non-halal)
Verdict: Simple setup, zero pretence. What you get is really good food. If you want people to crumb your table and fold your napkin, Atelier Binchotan is not for you. 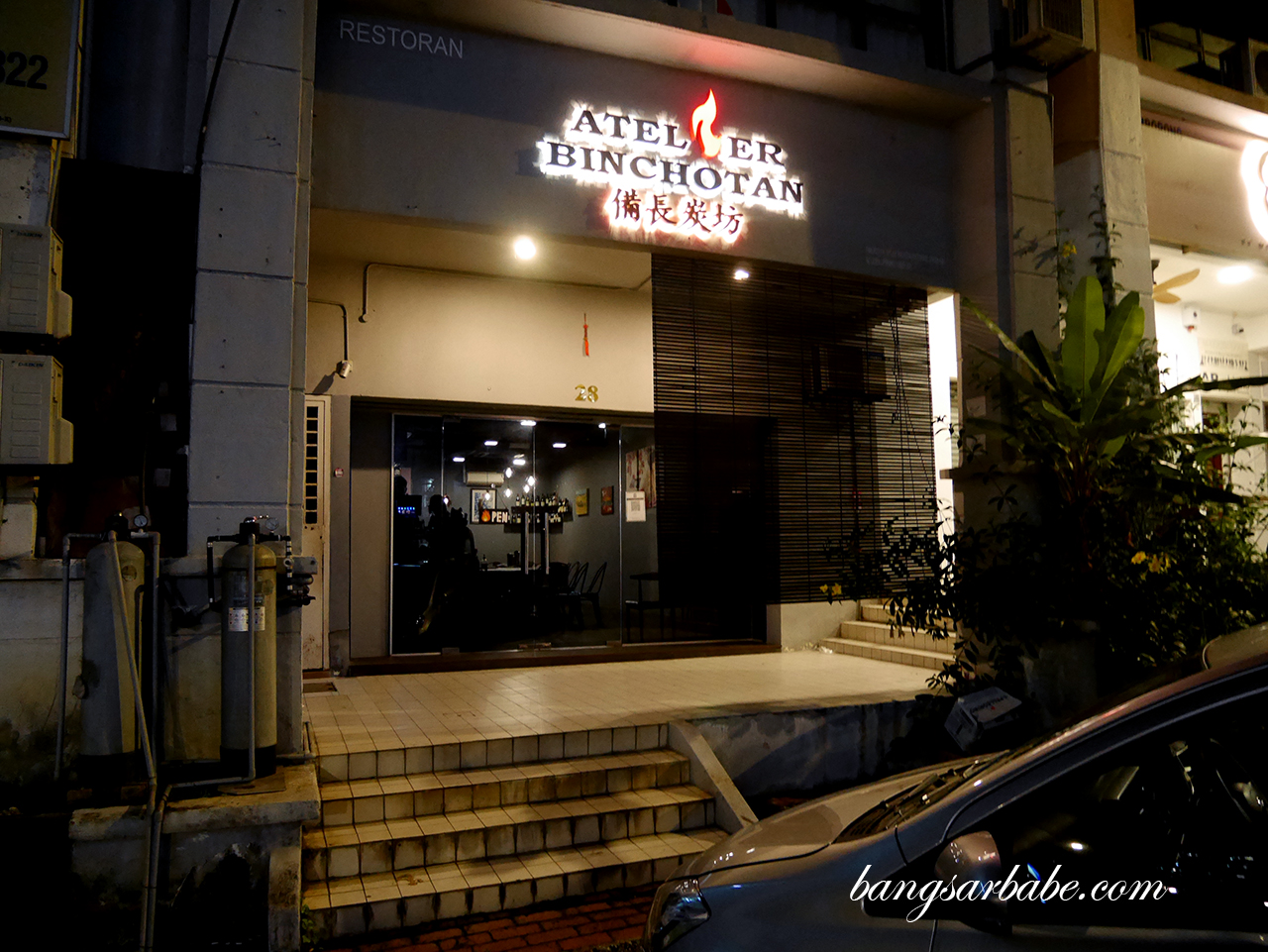