When Jien and I got hitched, he wanted to have our wedding dinner at a Chinese restaurant but out of respect to some of our guests, we opted for a hotel ballroom with pork-free menu. He’s been harbouring this unmet “desire” of having suckling pig ever since, as that’s one of his favourite things to eat at a Chinese restaurant. 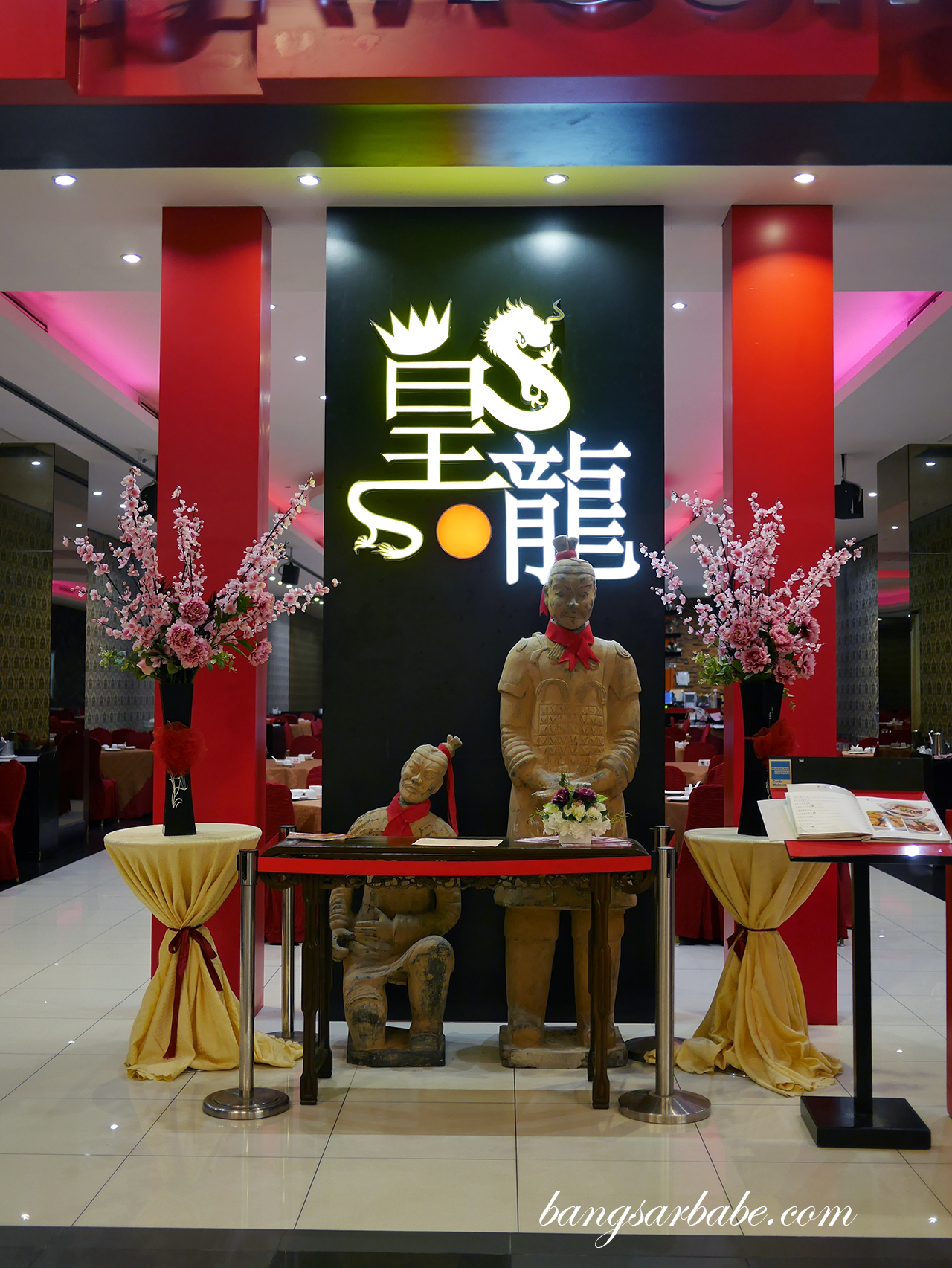 He was drawn to the promotion at Dragon Dynasty in Atria Shopping Gallery – RM168++ for a suckling pig and he was craving for one that night. Unlike many Chinese restaurants out there, you don’t have to call them in advance to reserve the suckling pig as it is available at all times. 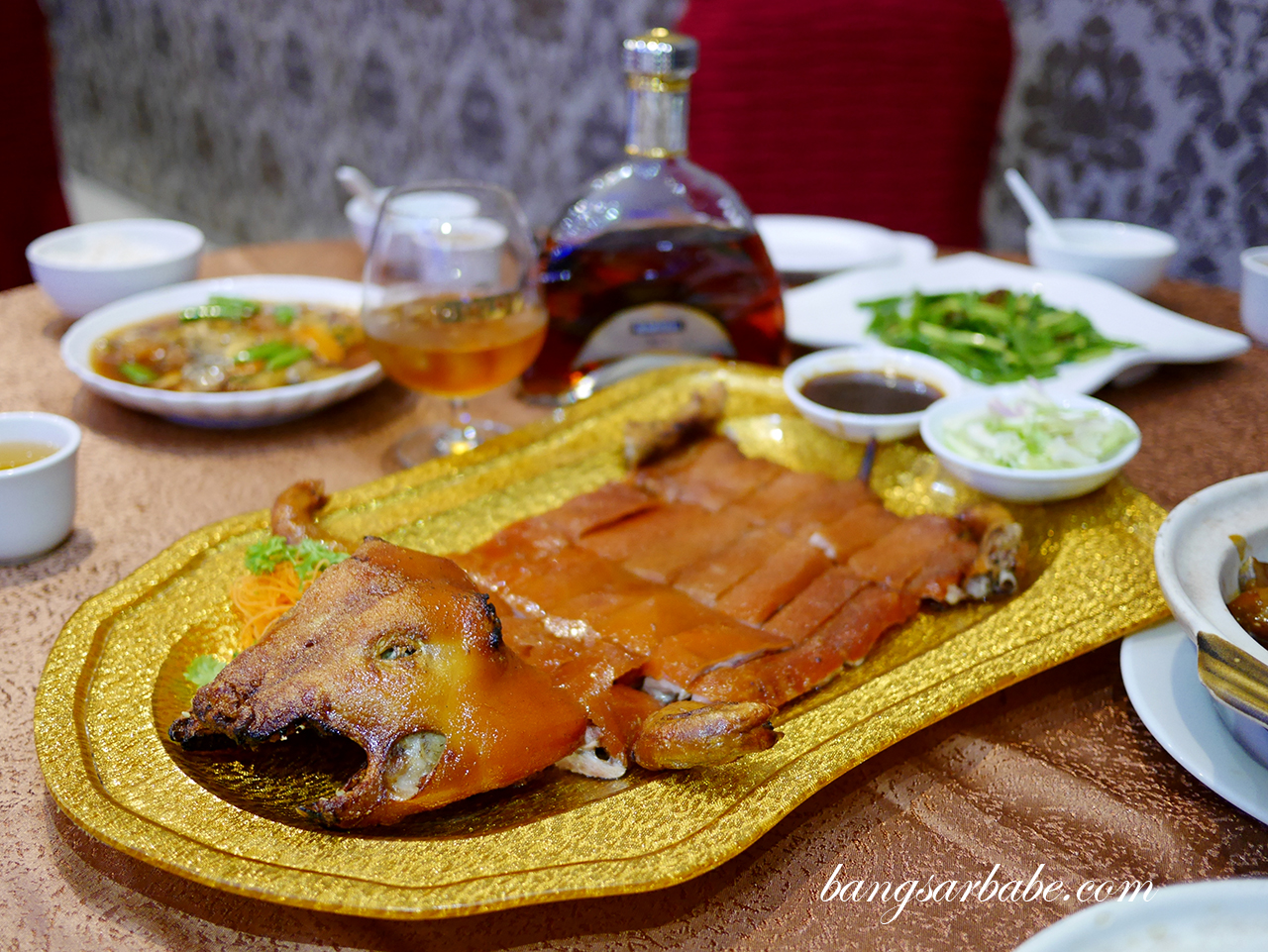 Tastewise, we found it commendable as the skin was crispy and slices were thin enough to enjoy bite by bite. It gets cloying after a while, so this is a dish that better suited for a group of 6-8 pax. The Braised Chicken with Pumpkin and Yam in Stone Pot (RM28) came highly recommended as it tasted good with Martell XO. 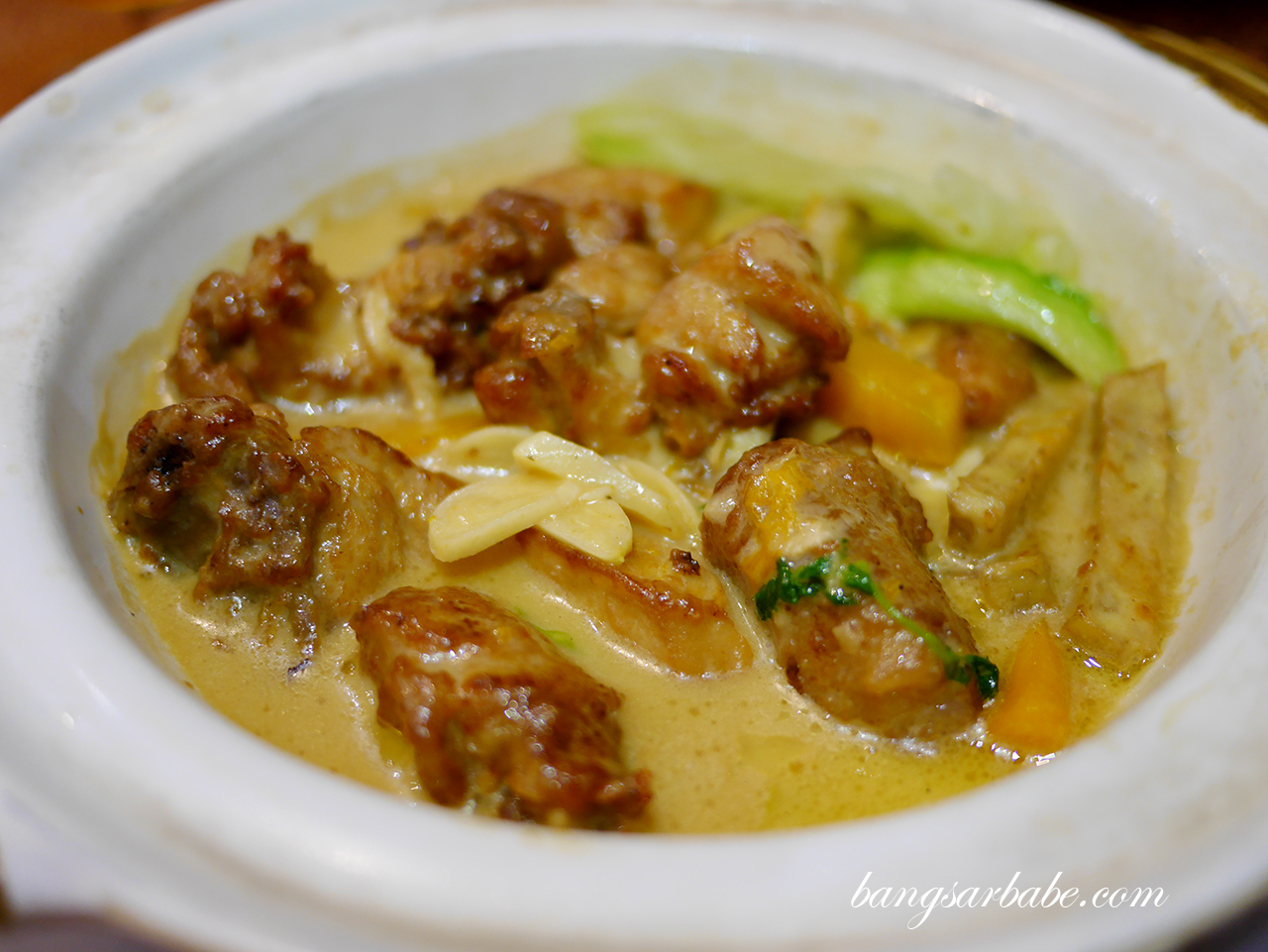 Braised Chicken with Pumpkin and Yam in Stone Pot 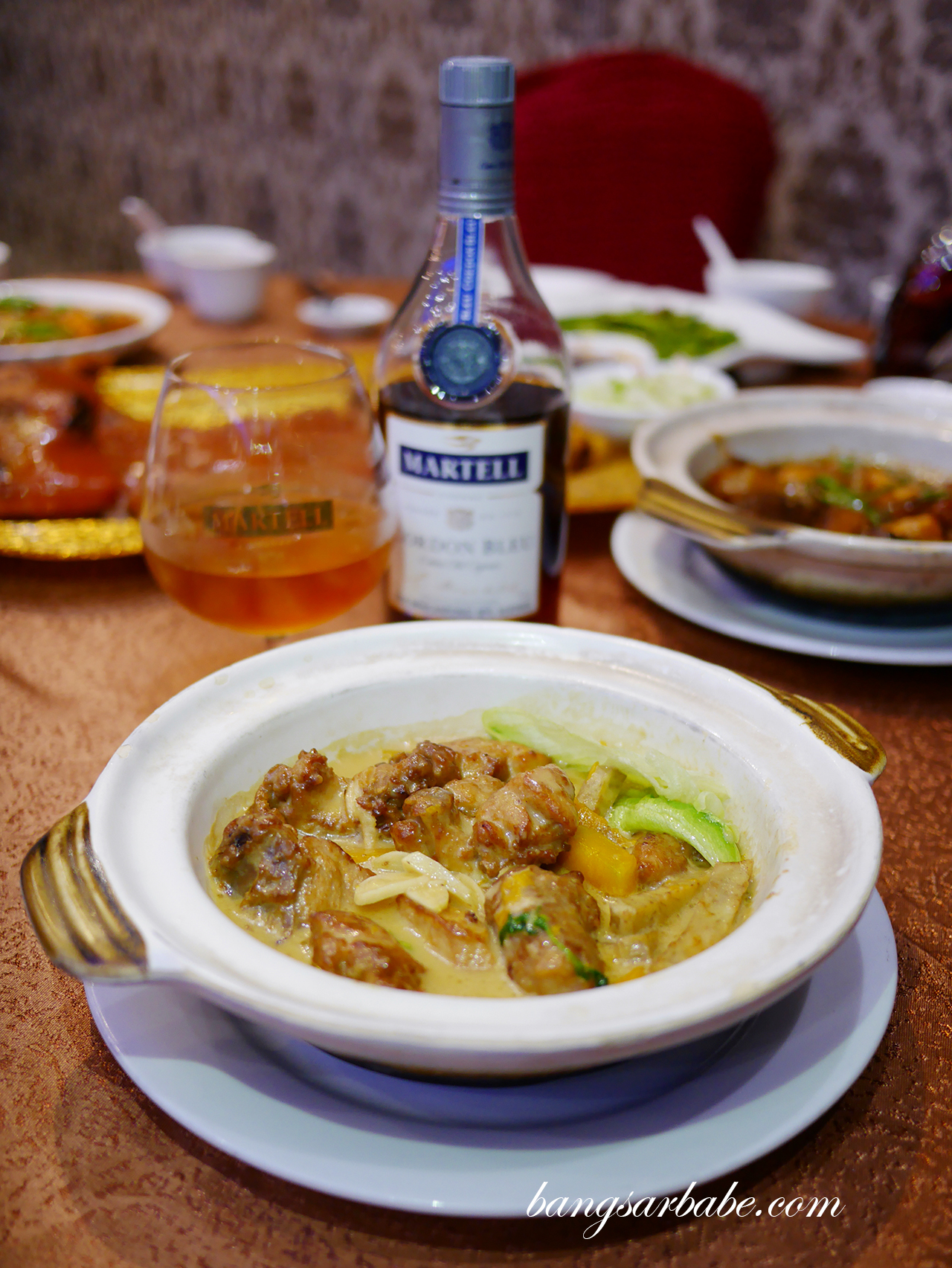 For some reason, I feel both the Martell XO and Cordon Bleu Extra pair well with simple dishes like chicken and stew rather than abalone or fish. The chicken pieces were tender and coated with gravy that’s thickened with pumpkin and yam – a bowl of rice is a must if you’re having this. 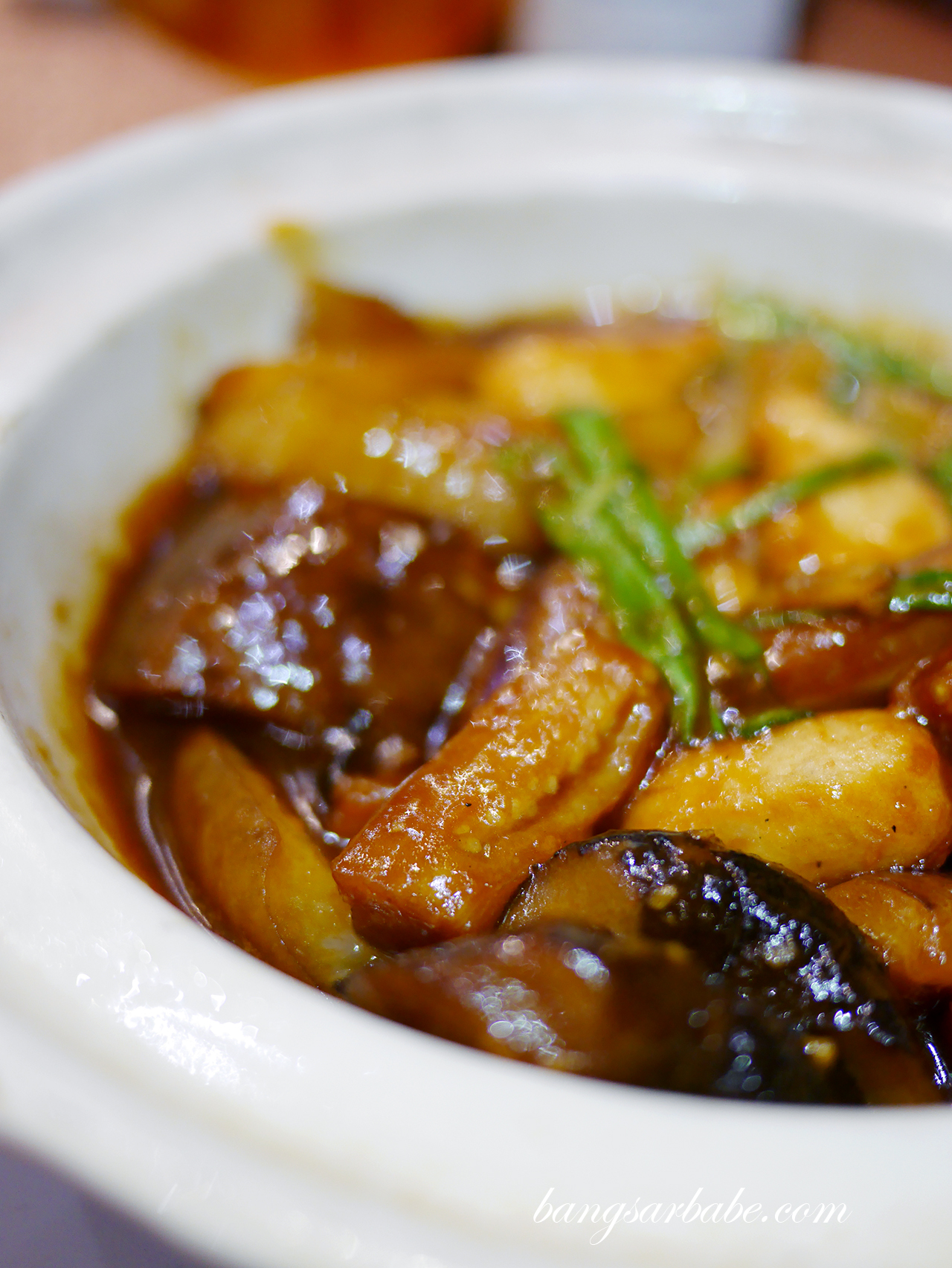 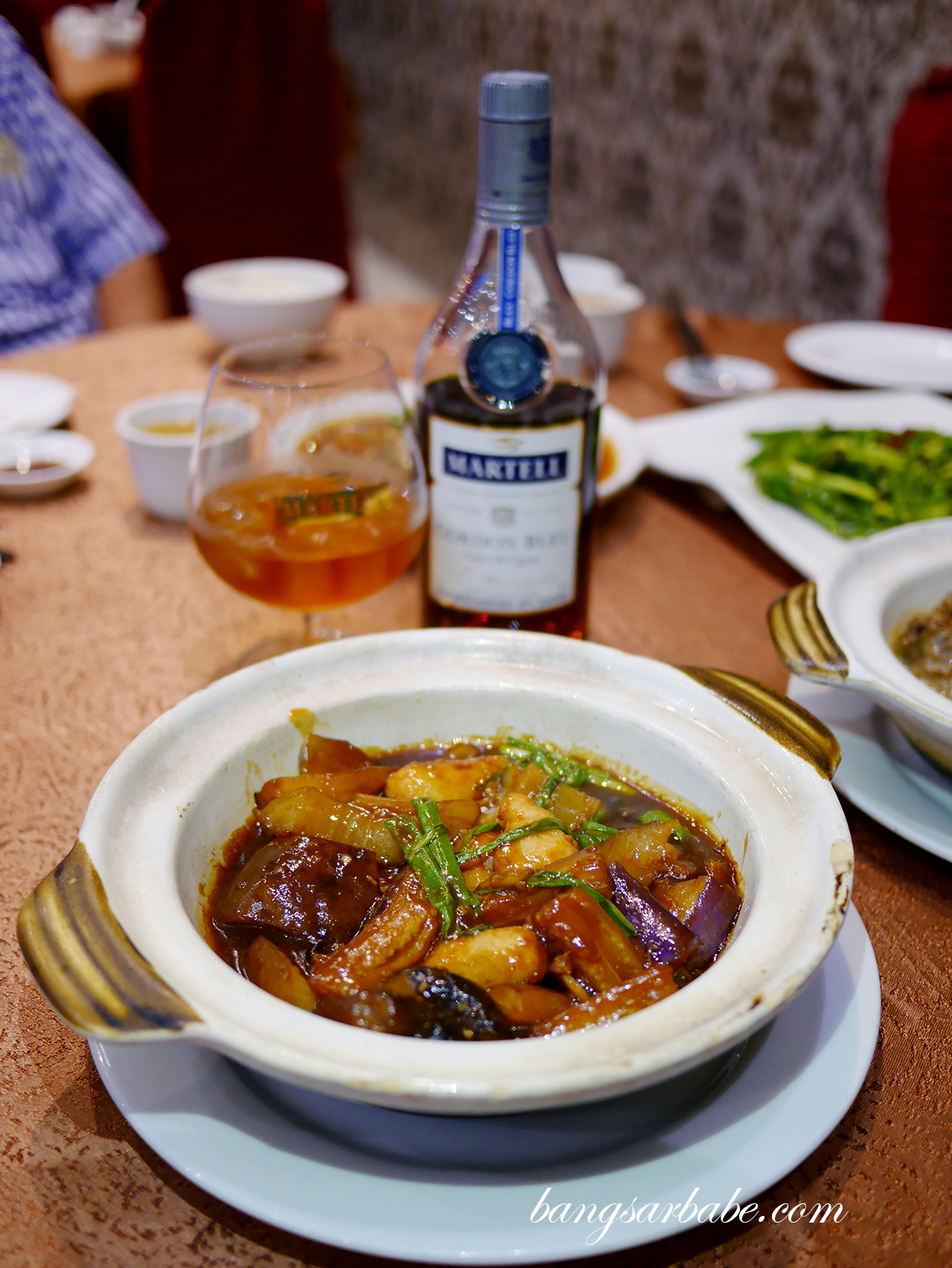 The Braised Fish Paste, Sea Cucumber and Brinjal in Claypot (RM38) would have made a good dish but the sea cucumber had a strong, alkaline smell which put me off slightly. If it was cleaned and cooked properly (read: tender and odourless), I reckon it would have been a pretty tasty. 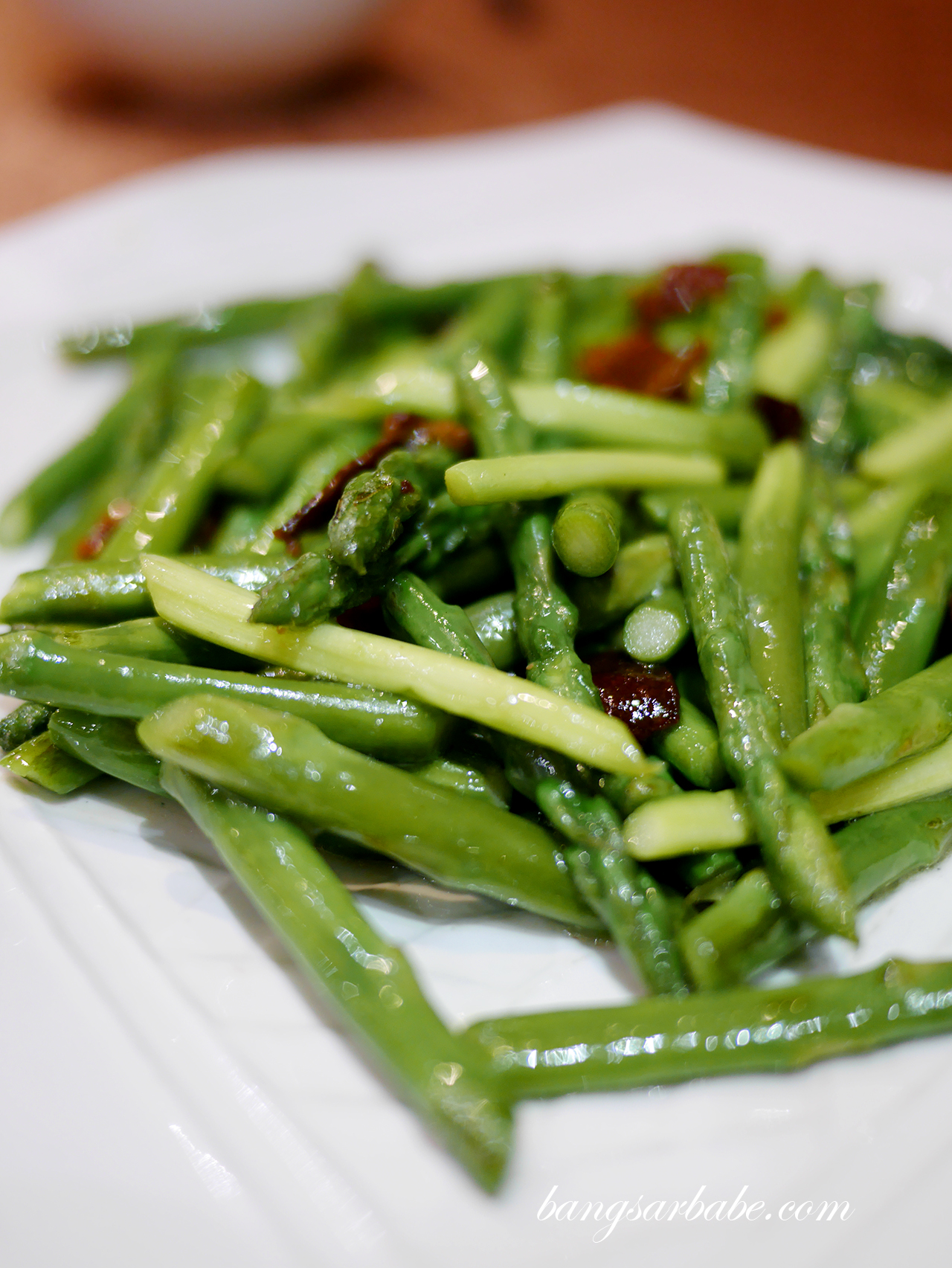 Stir-fried Asparagus with Bacon (RM18) was just alright if you asked me – the bacon was too hard so it didn’t do justice to the vegetables. I regretted ordering this over the fried kalian with scallops – I suspect the latter would be a better choice. 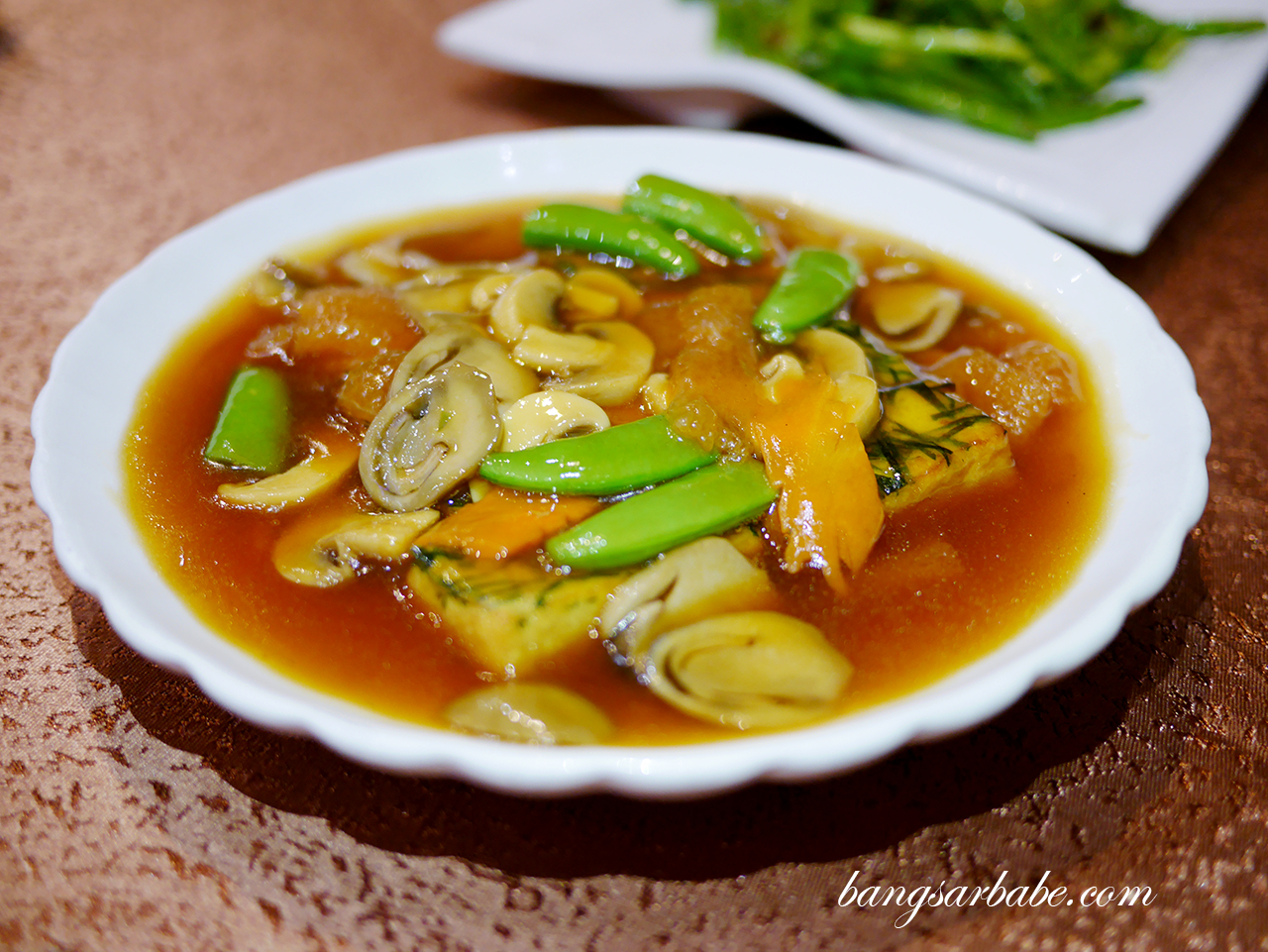 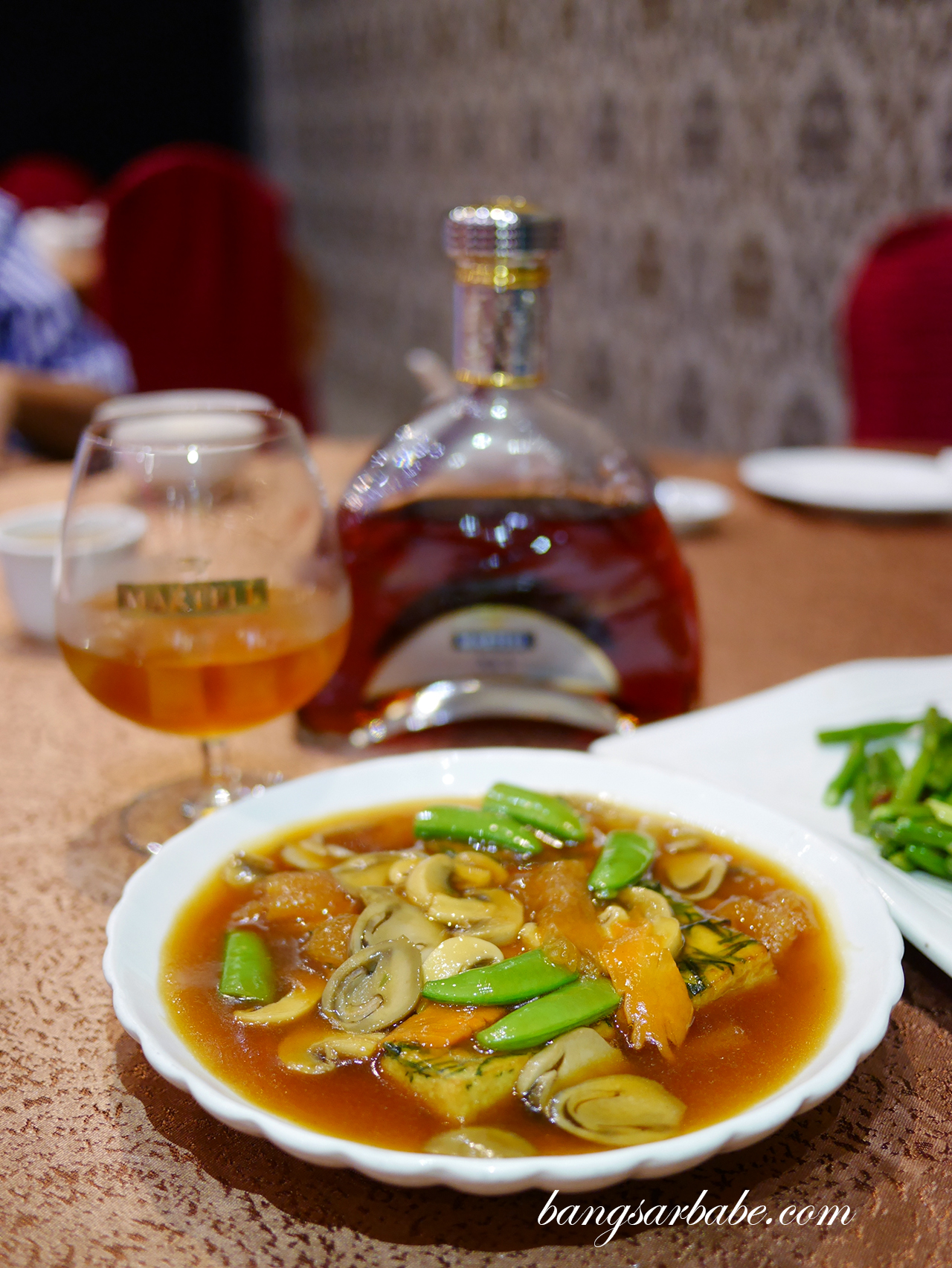 Most people would know how much I enjoy beancurd so naturally, I would order one whenever I get a chance. The Braised Bean Curd with Bamboo Pith and Fresh Mushroom (RM18) was not bad as you get sizeable squares of tofu that are deep fried and topped with light yet flavourful gravy. I like my beancurd dishes saucy in general so this one enjoyable for me.

Overall, I found the dishes at Dragon Dynasty pretty average save for the suckling pig and braised chicken. Ambiance is of course better than your normal Chinese restaurant but I felt the dishes could have been better. If you’re a fan of suckling pig, they’re running this promo price throughout Chinese New Year.

Ambiance: 6.5/10
Price: 6/10
Food: 5.5/10 (non-halal)
Verdict: Decent ambiance but I find the food rather average compared to the other Chinese restaurants in town. 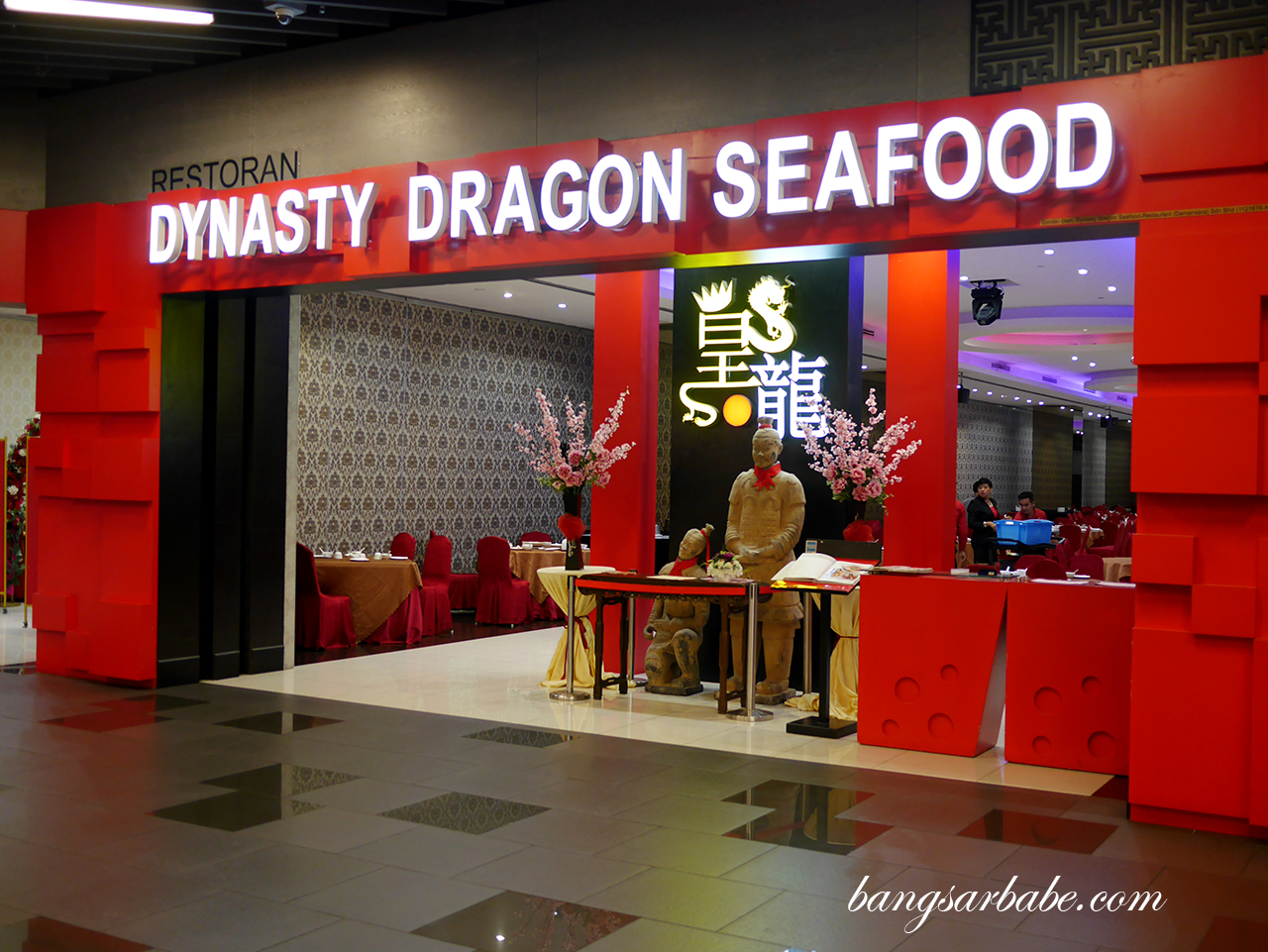