Home Travel Things To Do in Melbourne 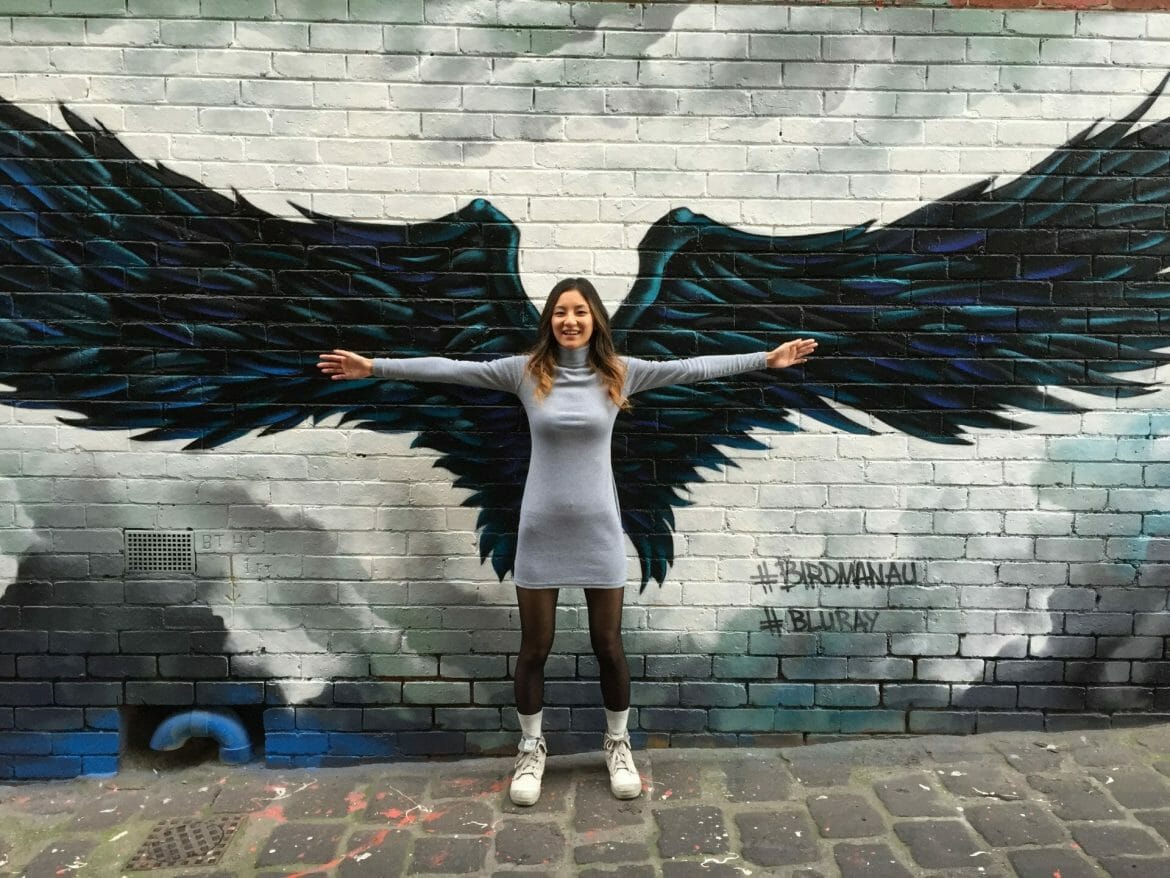 Things To Do in Melbourne

When is the best time of the year to visit Melbourne on a moderate budget? You probably guessed right – smack in the middle of winter. The good part about living in Kuala Lumpur and traveling to a place like Melbourne for a holiday is that those who love the cold can still enjoy the visit knowing that it’s a guaranteed respite from KL’s weather. I got a good deal with AirAsiaX (including a one-way Premium Flat-Bed) at roughly RM 1300 per person as airfares were comparatively lower towards the end of June-July. 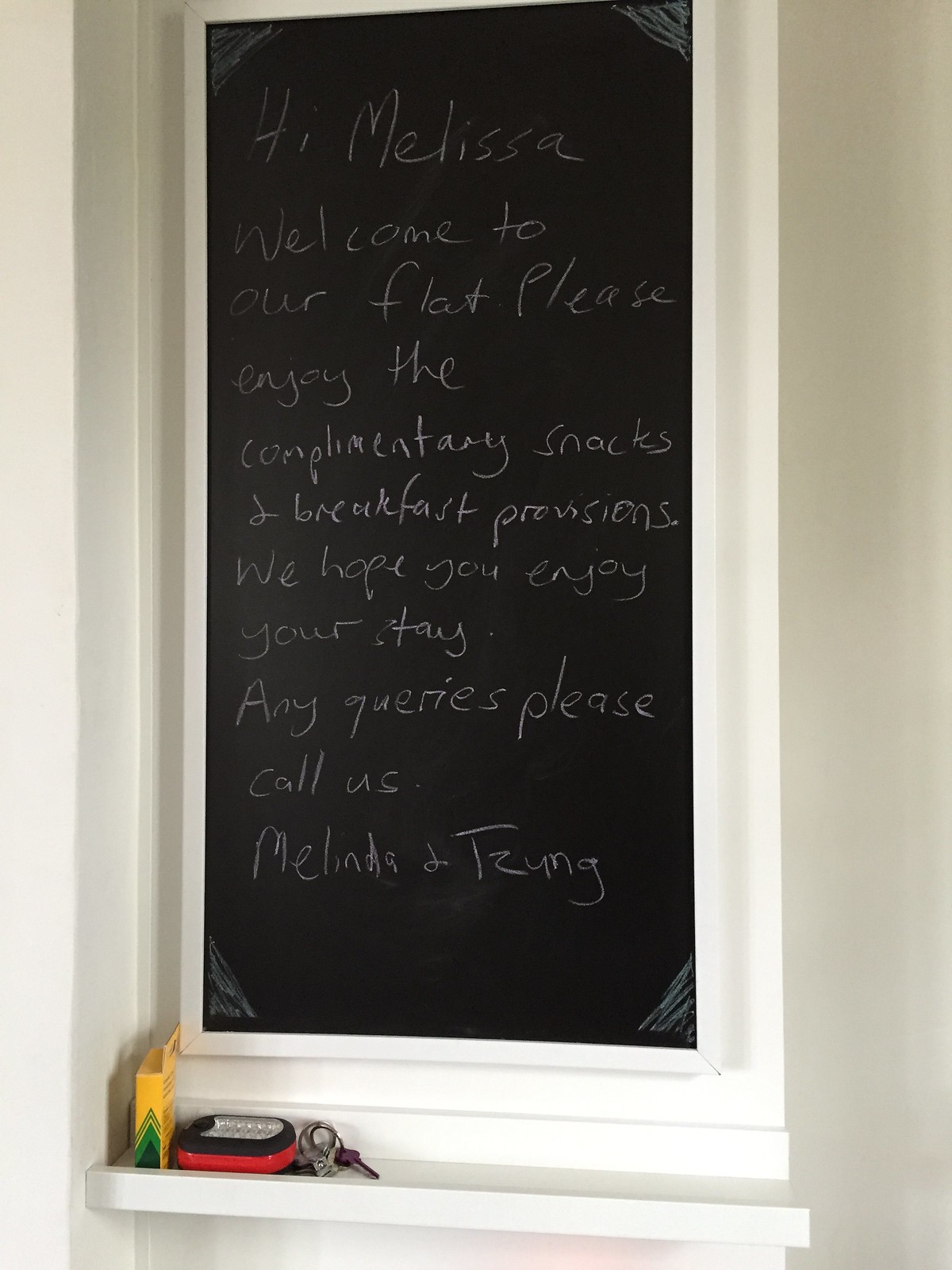 Welcome message from our Airbnb host 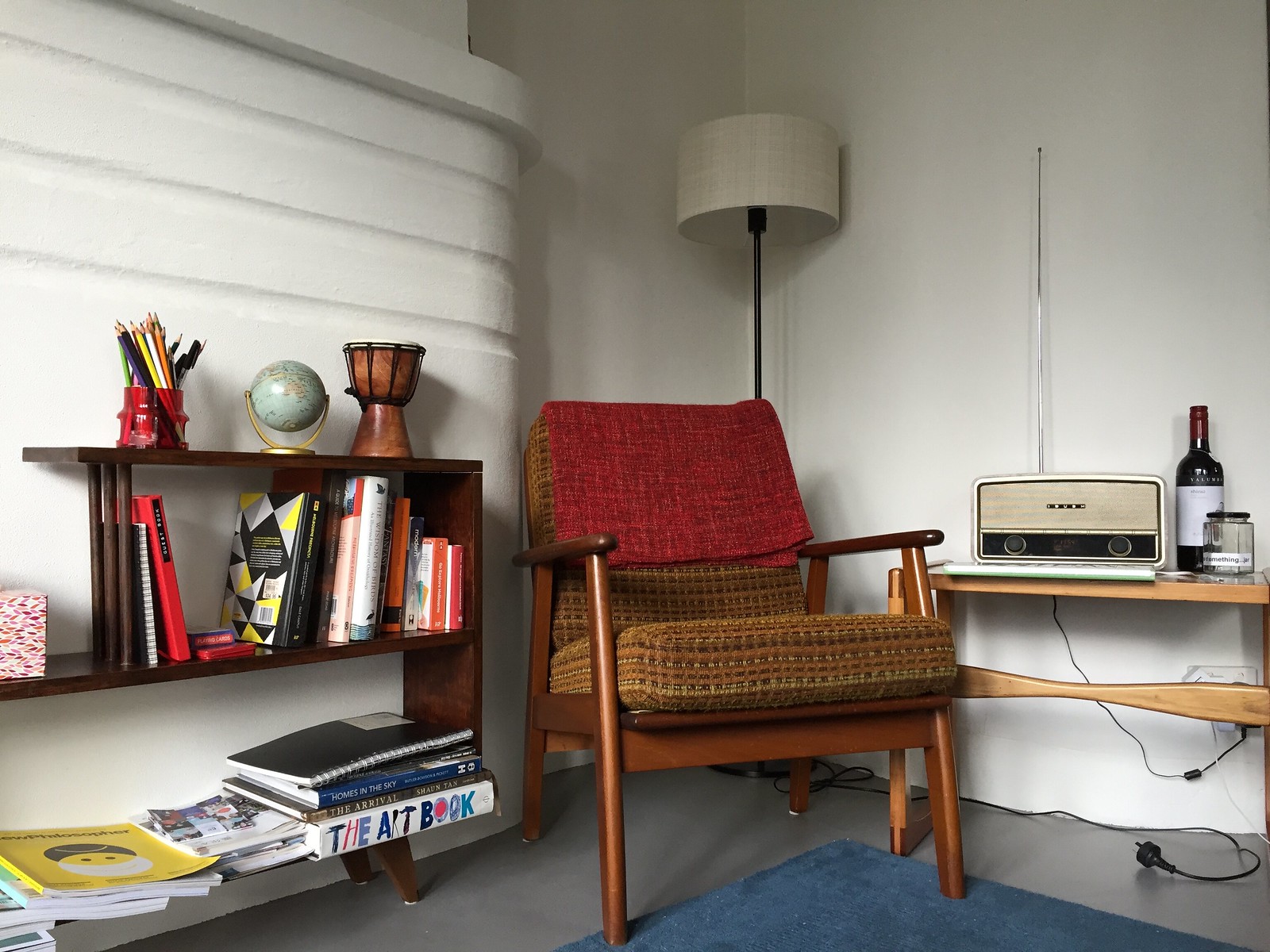 Vintage furniture in our Airbnb flat

Once again, I used Airbnb as I’ve not had any bad experiences to date. Furthermore, a hotel stay would have cost us at least 30% more per night compared to Airbnb. Selecting the right accommodation for Melbourne was a bit tricky this time around as our main priority was the location and its proximity to the CBD, as well as access to public transportation. Not surprisingly, the closer it was to the CBD, the more expensive the rates. 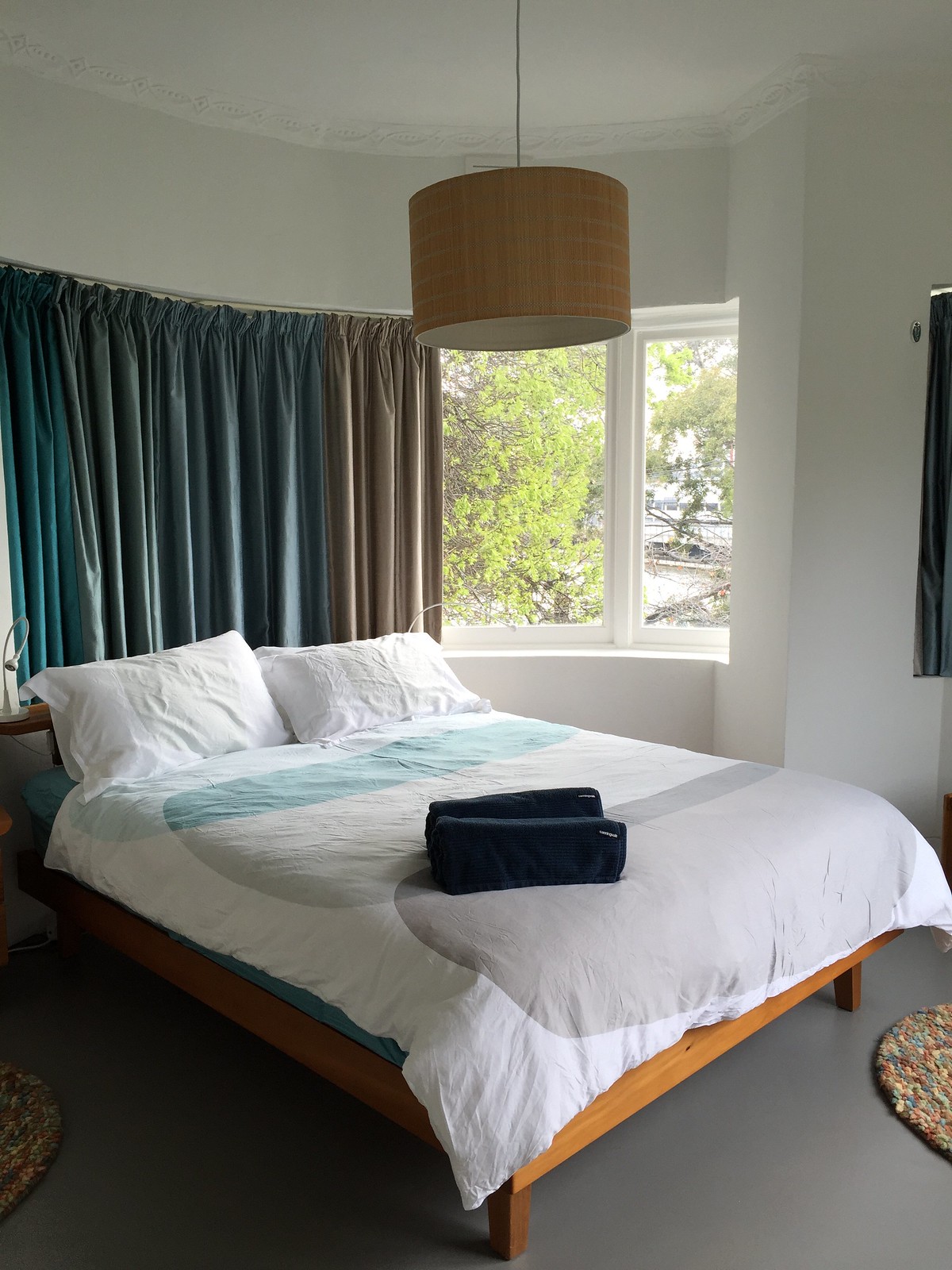 Bedroom in our Airbnb in South Yarra

I managed to book a flat in South Yarra, which was fairly close to the CBD and just 600m away from the South Yarra station. It was also situated at the end of Church Street which was connected to the vibrant Chapel Street. Bread, milk, eggs and breakfast cereal were provided throughout our stay, which was a very nice personal touch as you don’t get that often. 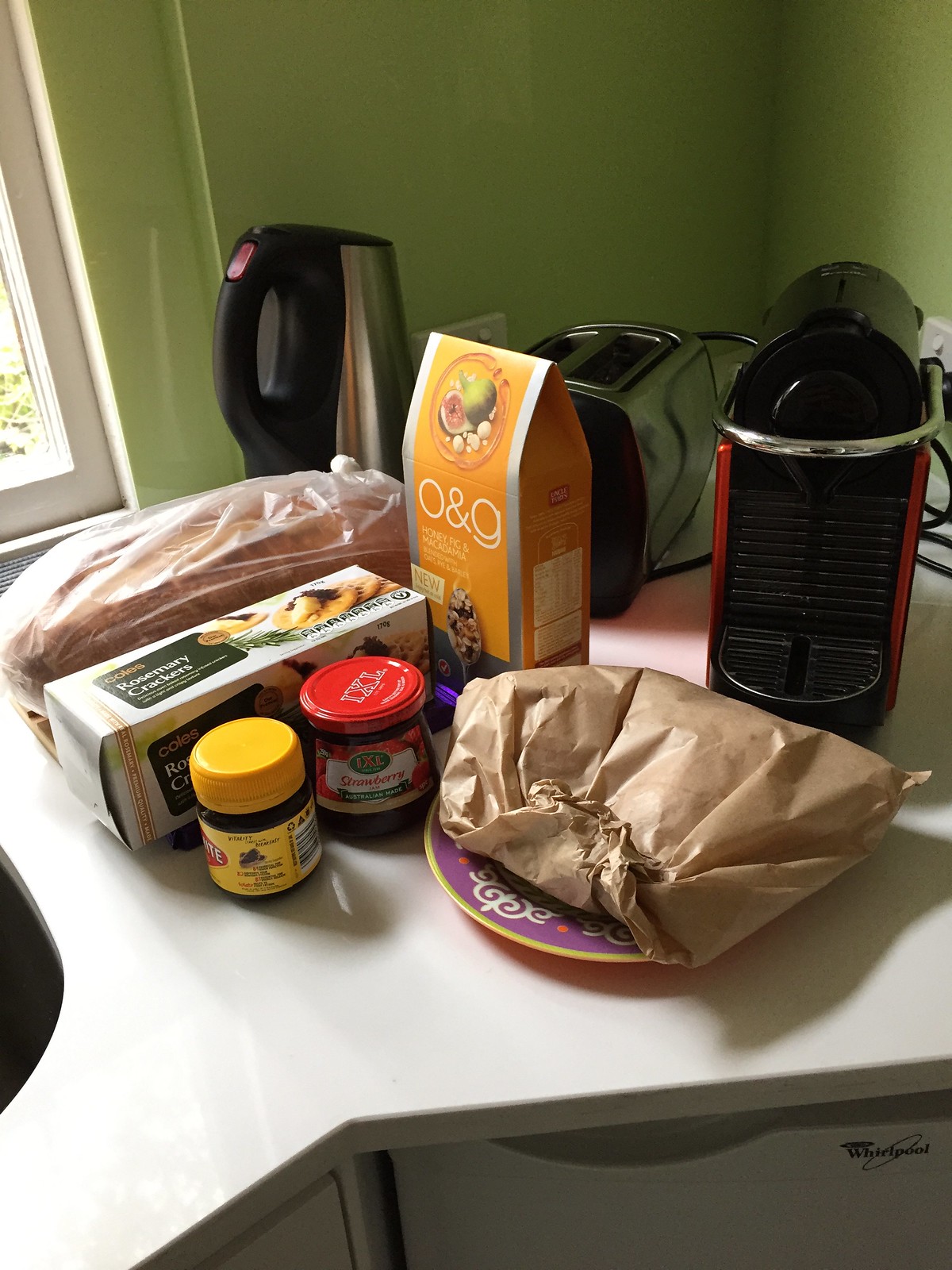 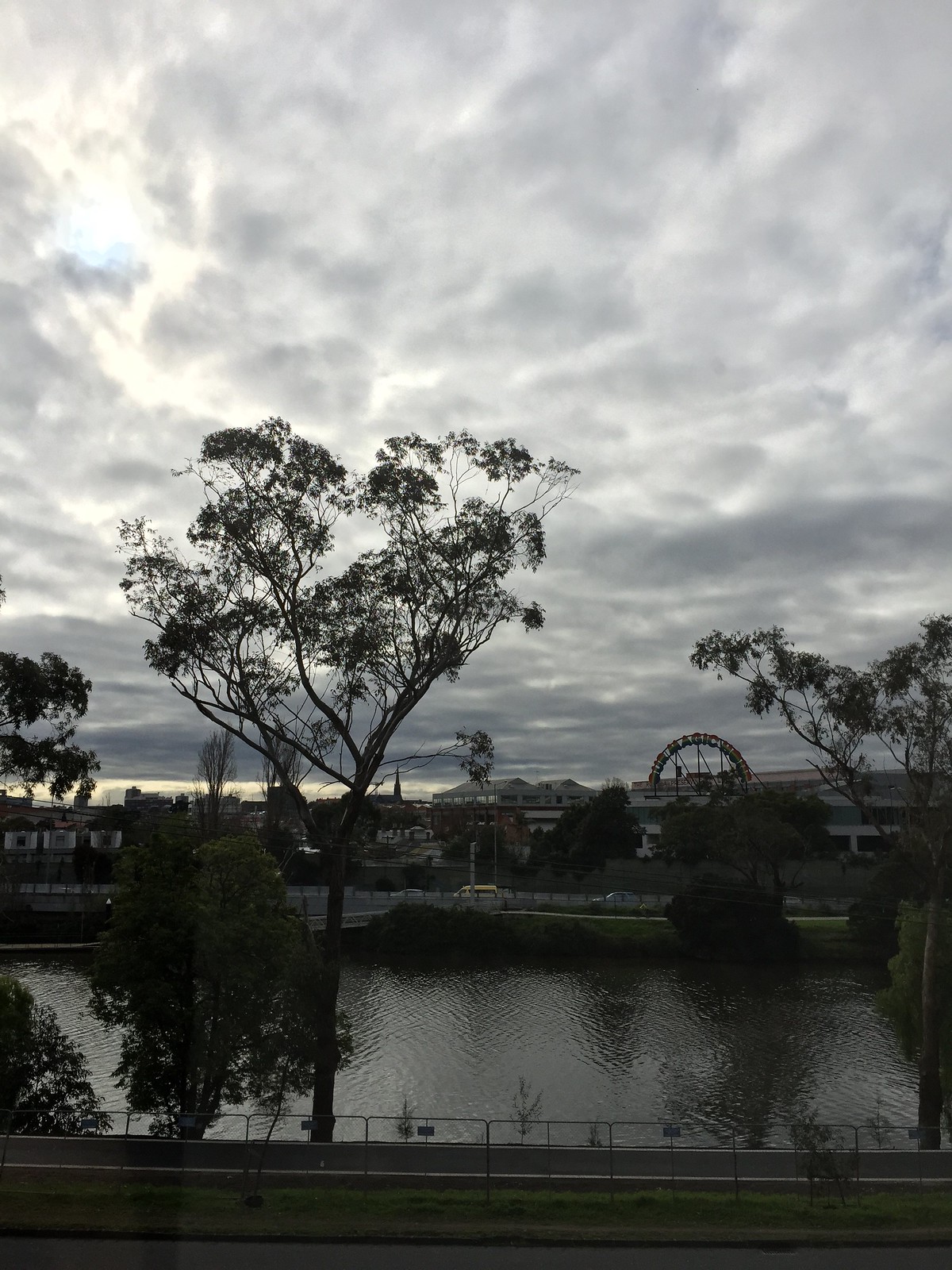 View from the flat

Two bikes/helmets were also available for us to use as the place was perfect for cycling enthusiasts considering there was a 2.7 Km bike trail along the Yarra River which would take you into the city (Federation Square, Southbank, The National Gallery of Victoria). The price per night worked out to about RM 350++, which was fairly reasonable for accommodation rates near the CBD.

We chose not to rent a car or travel out of the city to experience living in Melbourne like a local for a week. This allowed us to plan our itinerary with some degree of flexibility and explore the city at our own pace. It is no secret one of the reasons that Malaysians love Melbourne is because it has garnered a reputation for being Australia’s most well regarded foodie destinations. If any of you have ever travelled to Melbourne for leisure or business, you would probably recall bumping into a friend or a mutual acquaintance on the plane, a café or a farmers market. 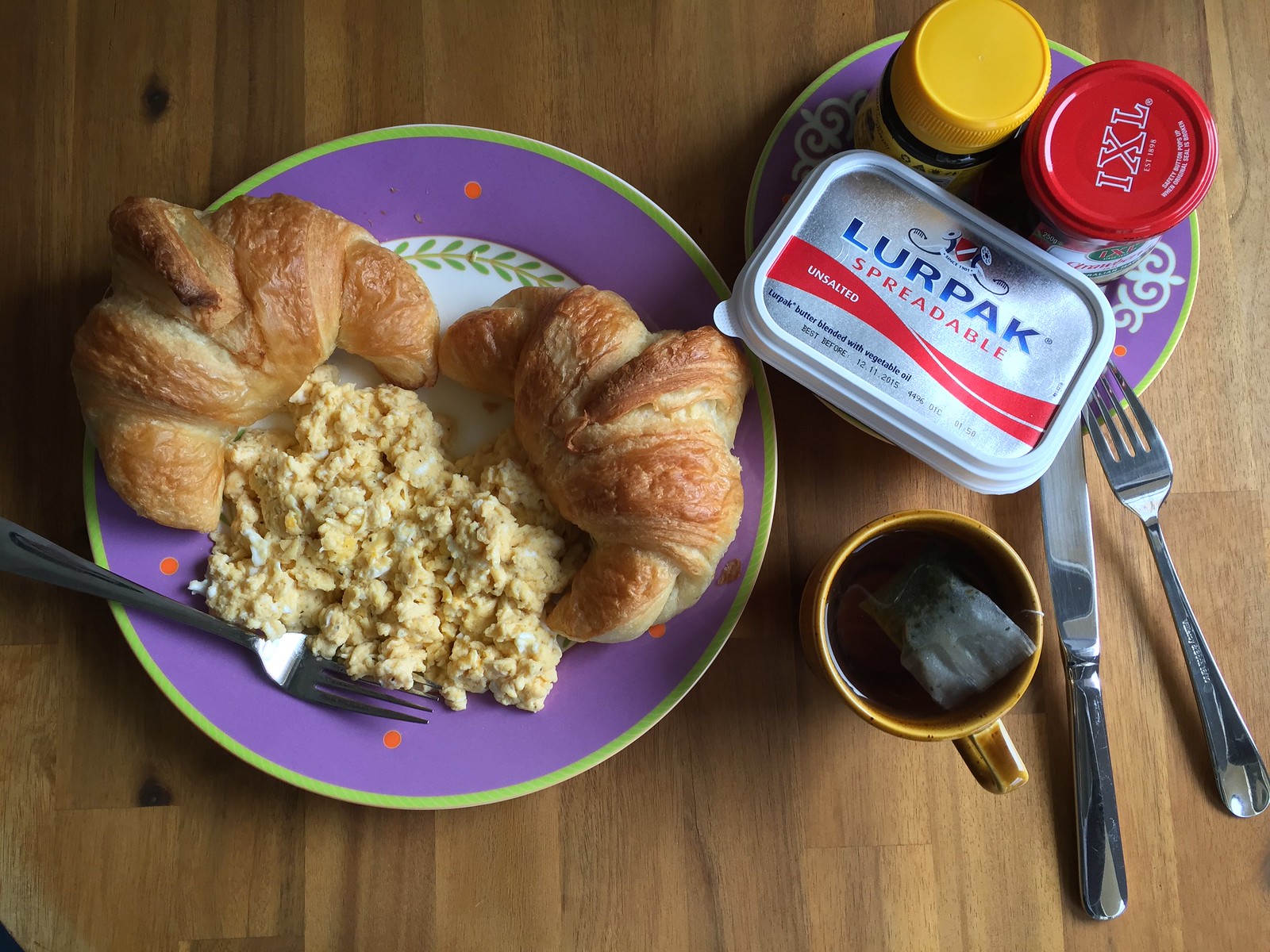 Knowing that we’d be entering into a culinary hotspot of sorts, I did my Google due diligence in researching and comparing eateries that we’d want to visit based on price, location, cuisine type, and also opening hours. The last thing that you’d want is to be completely disappointed upon arrival at a café or restaurant only to realise that it is not open because you did not check their operating hours before going through 3 different train changes to get there. 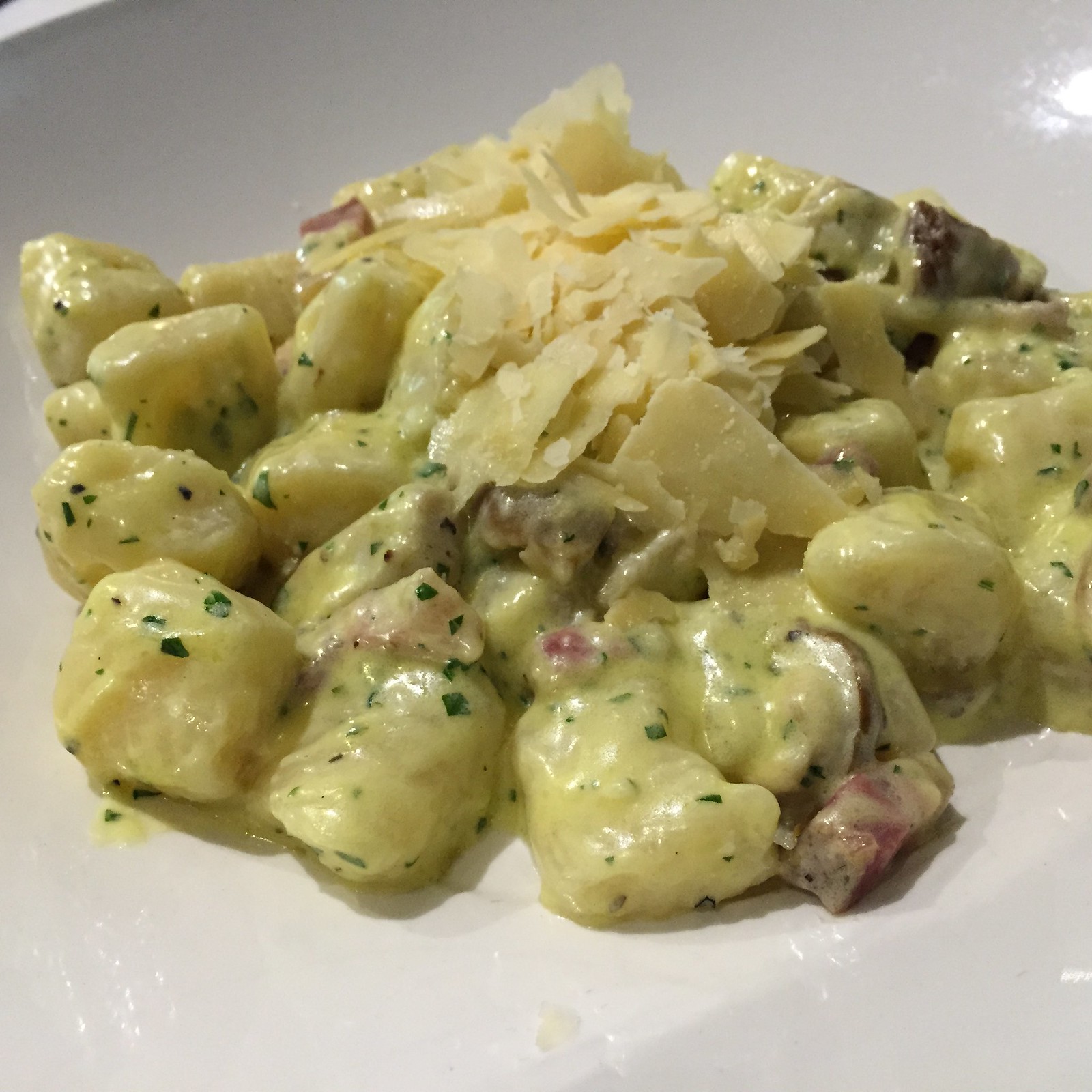 Gnocchi with pancetta and porcini at Seasons Provedore

Be wary of restaurant reviews in food magazines or blogs as some articles could have been published 3 years ago and the food and beverage scene in a place like Melbourne evolves quicker than the rate of iOS system upgrades. Very seldom do online portals ever update the details of a food review especially when it has relocated, changed its operating hours and even if they have completely closed down.

We split our itinerary with the aim of exploring different areas of Melbourne throughout the week to cover the following: 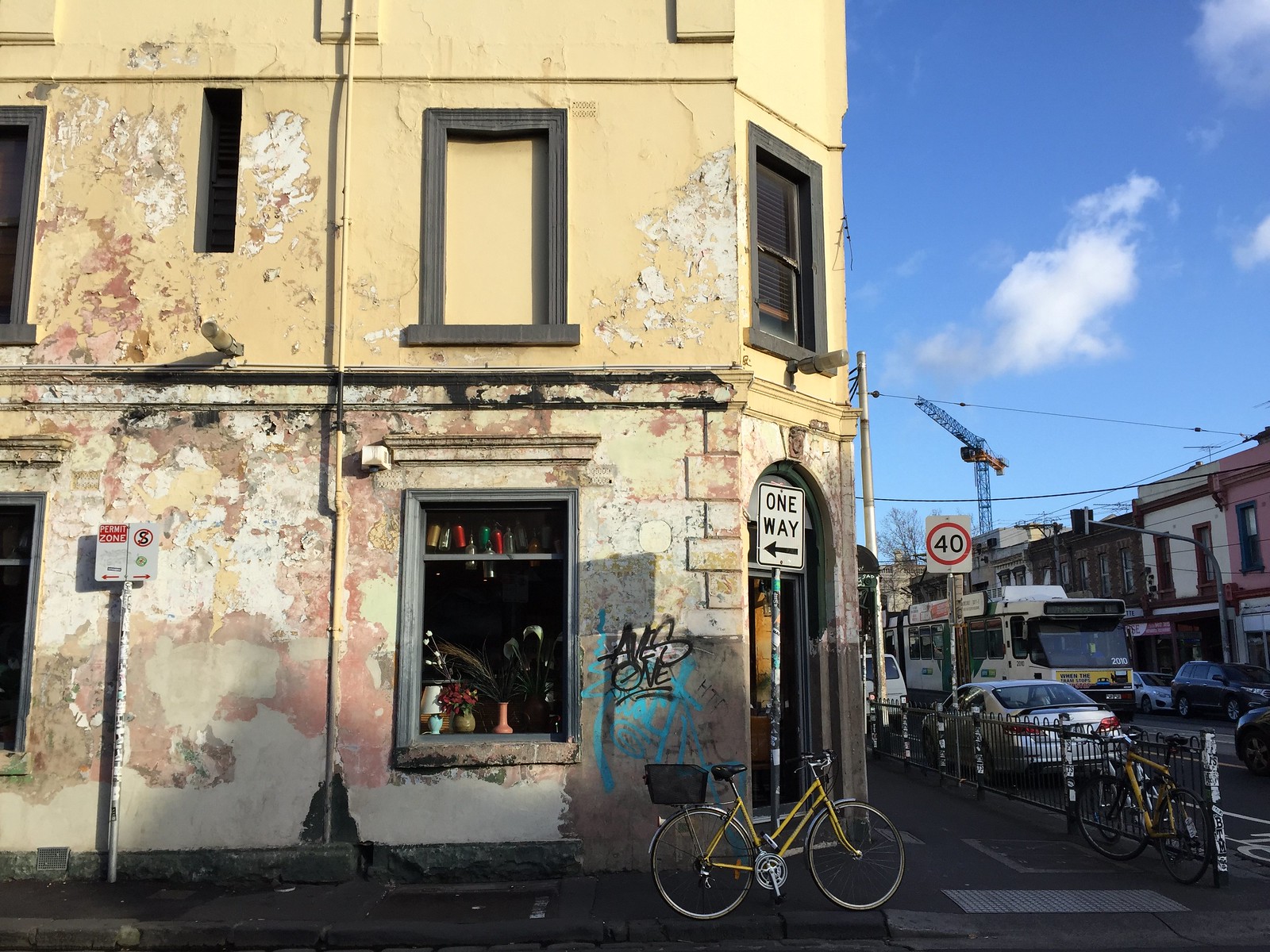 Brunswick, the heart and soul of all things hipster 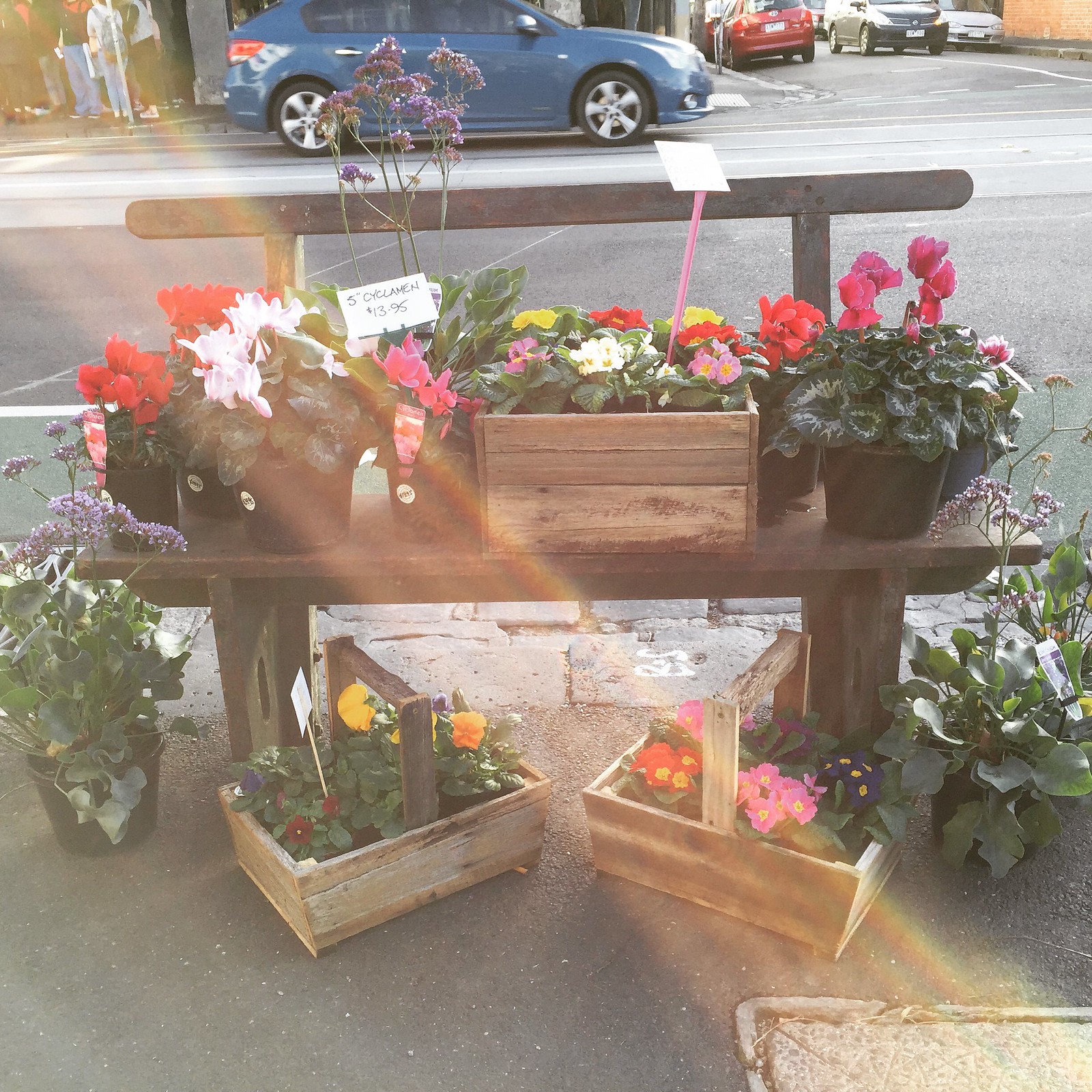 This is the heart and soul of all things hipster, vintage and pre-loved clothing stores and it is just minutes north of CBD on the 112 tram. Brunch at Hammer and Tong came highly recommended by our friends, but we had to give it a miss this time around. 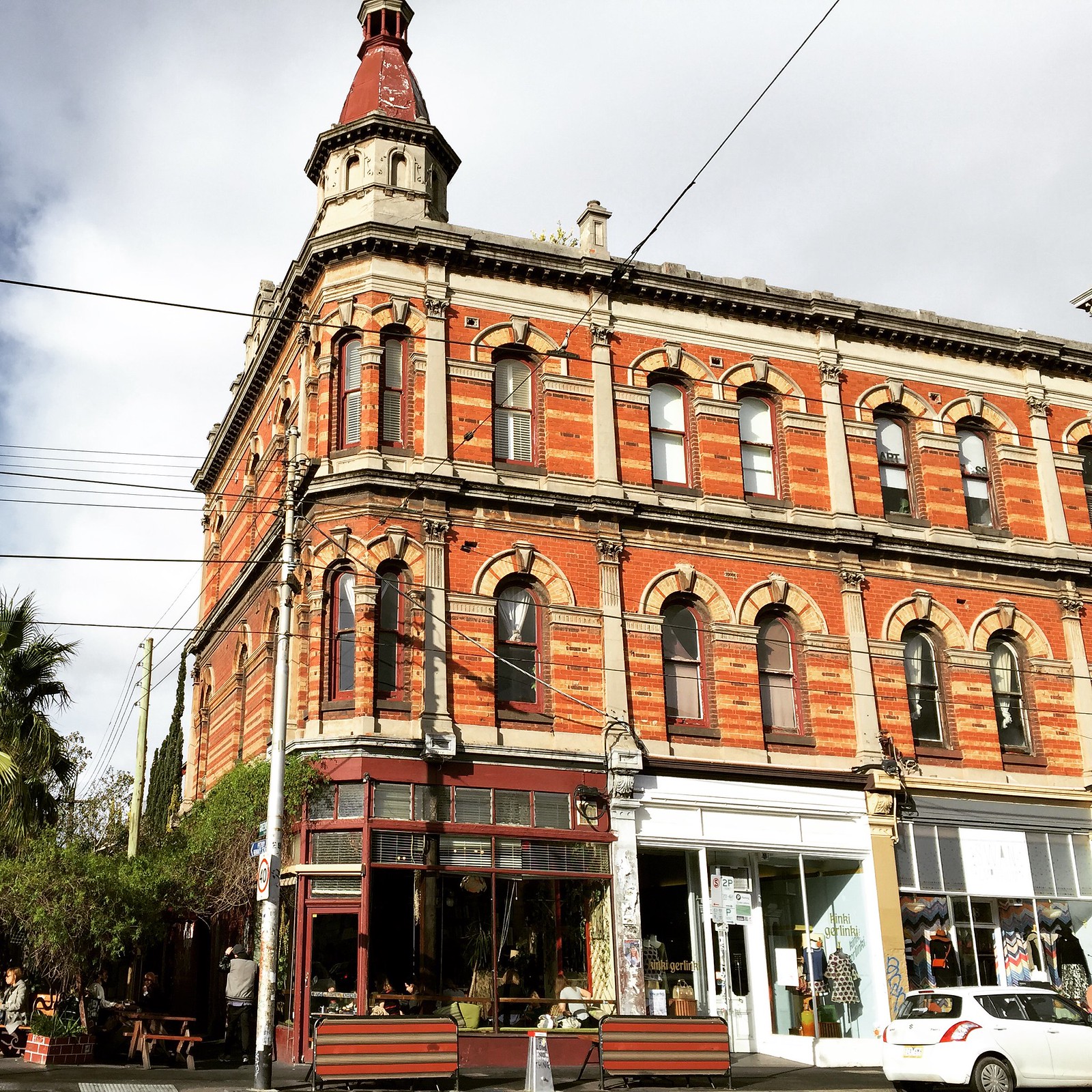 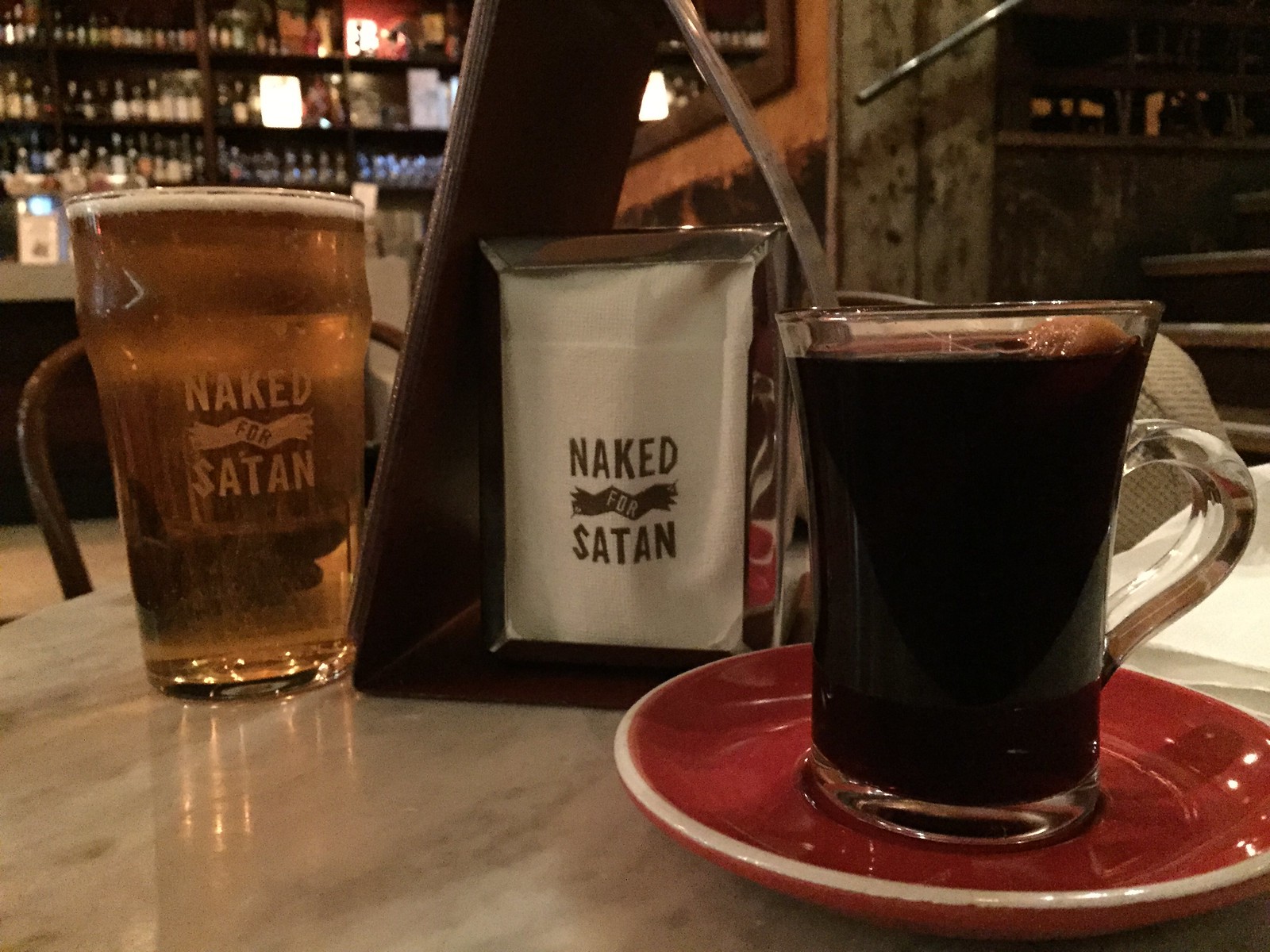 Mulled wine at Naked for Satan

Bars worth checking out in this area include Naked for Satan known for its self-serve pintxos, infused vodka and rooftop bar. We were lucky enough to sample the craft beer at Little Creatures Dining Hall in Brunswick before it closed down for good in January 2016. 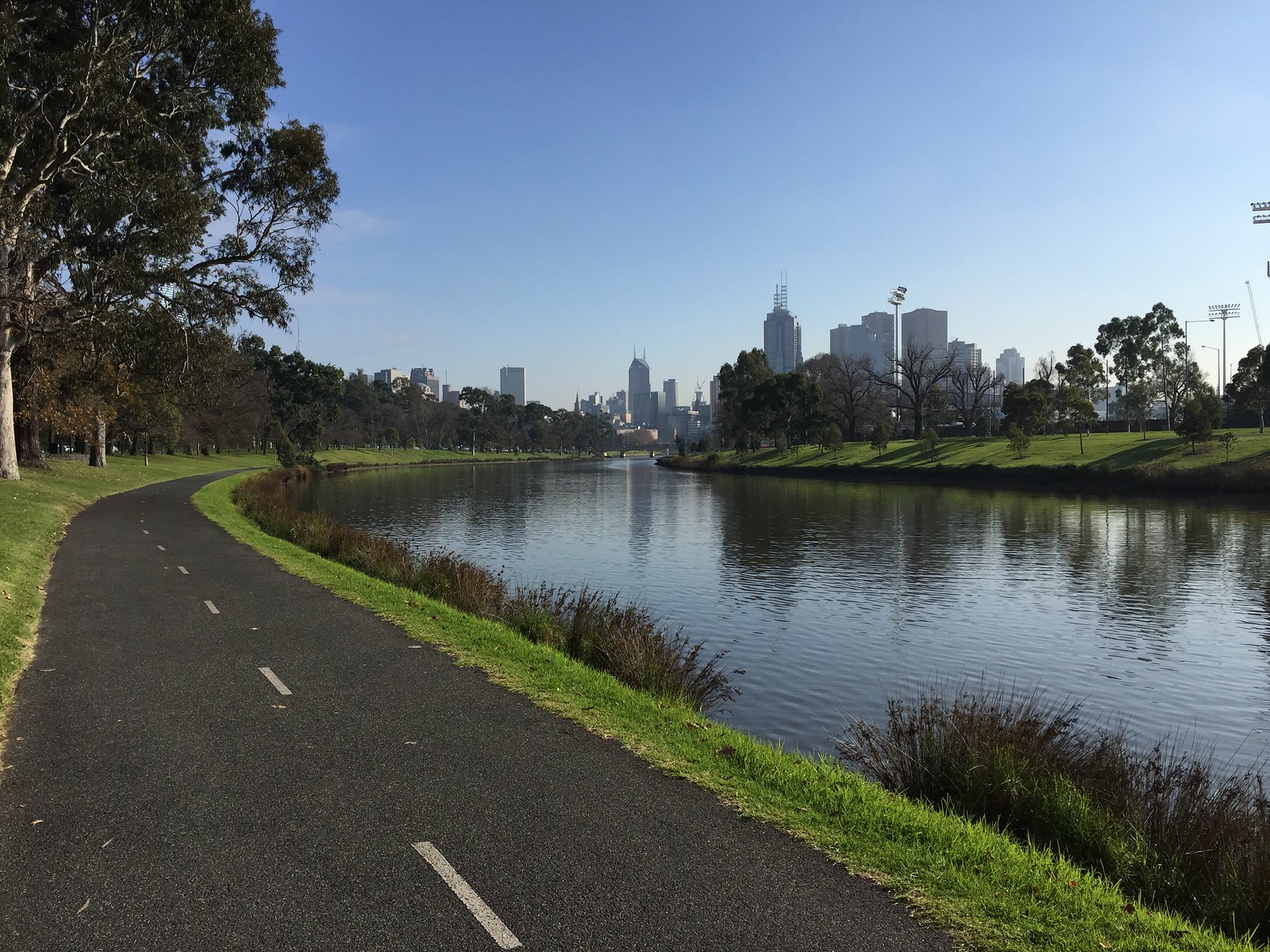 Situated on the iconic Chapel Street is an upmarket shopping strip hailed as the ‘fashion hub’ of Melbourne. Here you will find local as well as international designer boutiques stretching from South Yarra towards Windsor. If you prefer wining and dining, there is a huge selection of bars, pubs, cafés and restaurants to choose from. 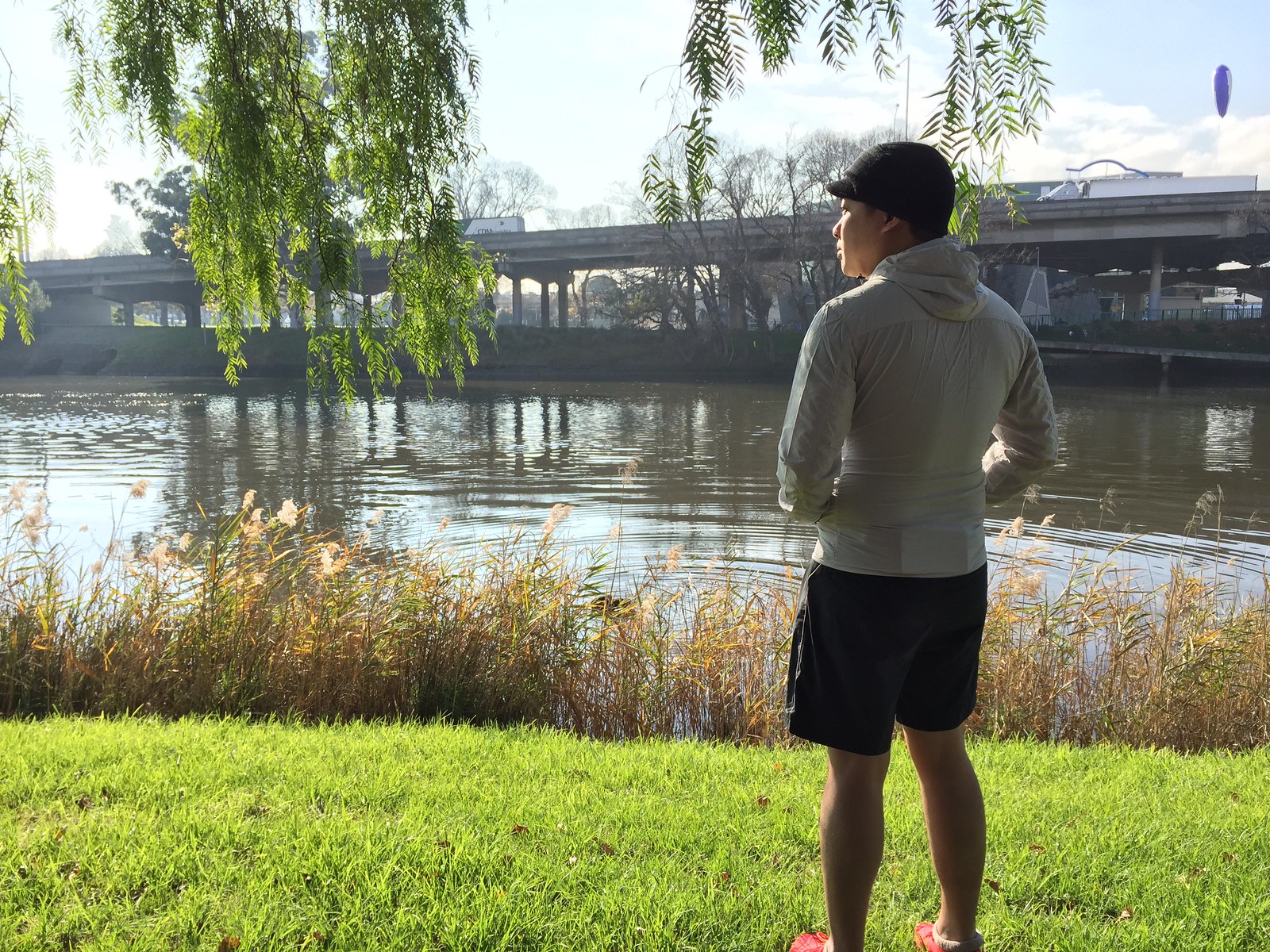 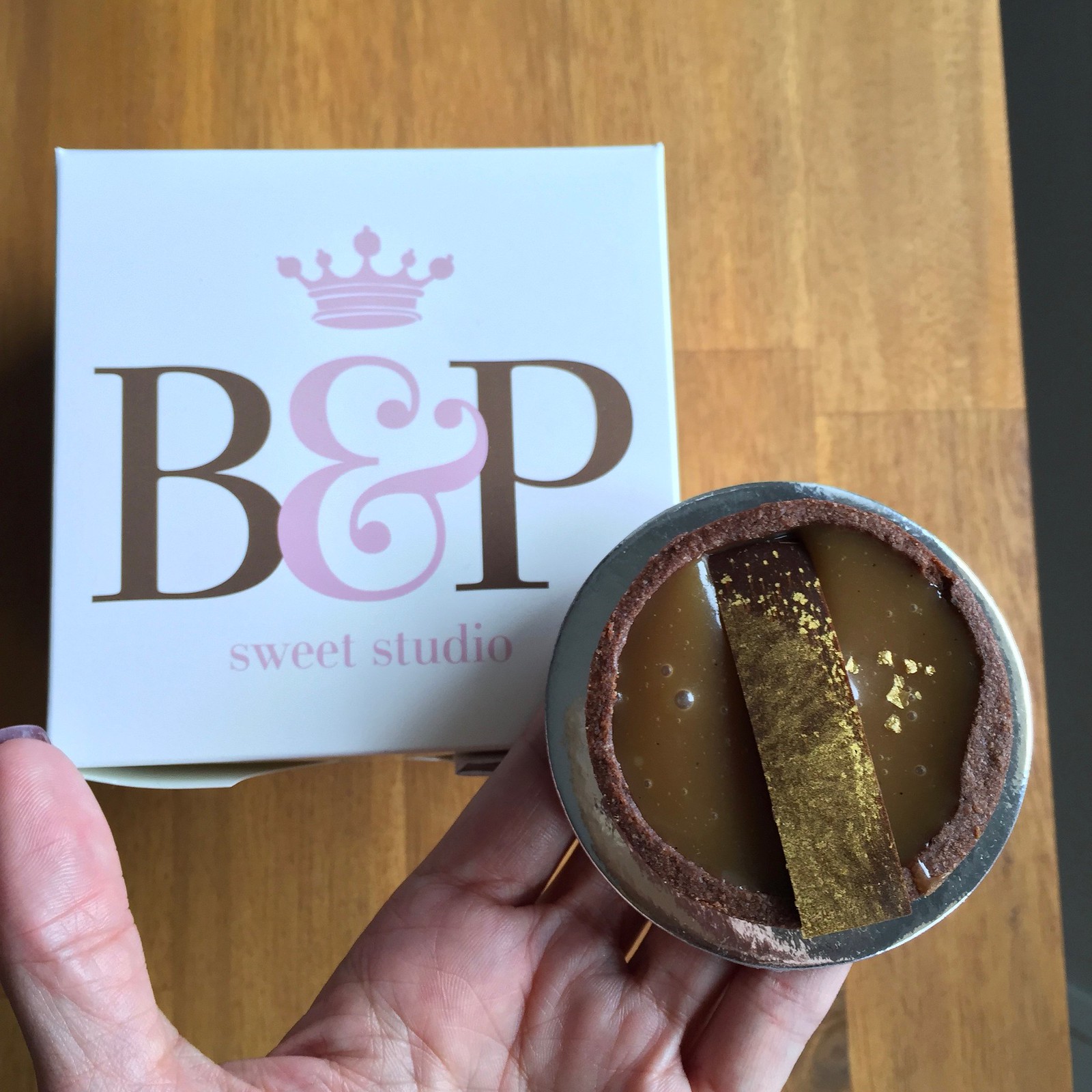 Enjoy some mulled wine in one of the many bars (and if you happen to visit during the peak of winter). Try an exquisite dessert creation from Burch and Purchese or Adriano Zumbo Patisserie, both situated in South Yarra area. The highlight for us was Prahran Market, open every day except Monday and Wednesday. The market offers fresh produce, seafood and meats including deli-style cold cuts and cheeses. We ordered 4 dozen oysters to share between the both of us, on two separate visits to the market as they were going for about $1 AUD per oyster! 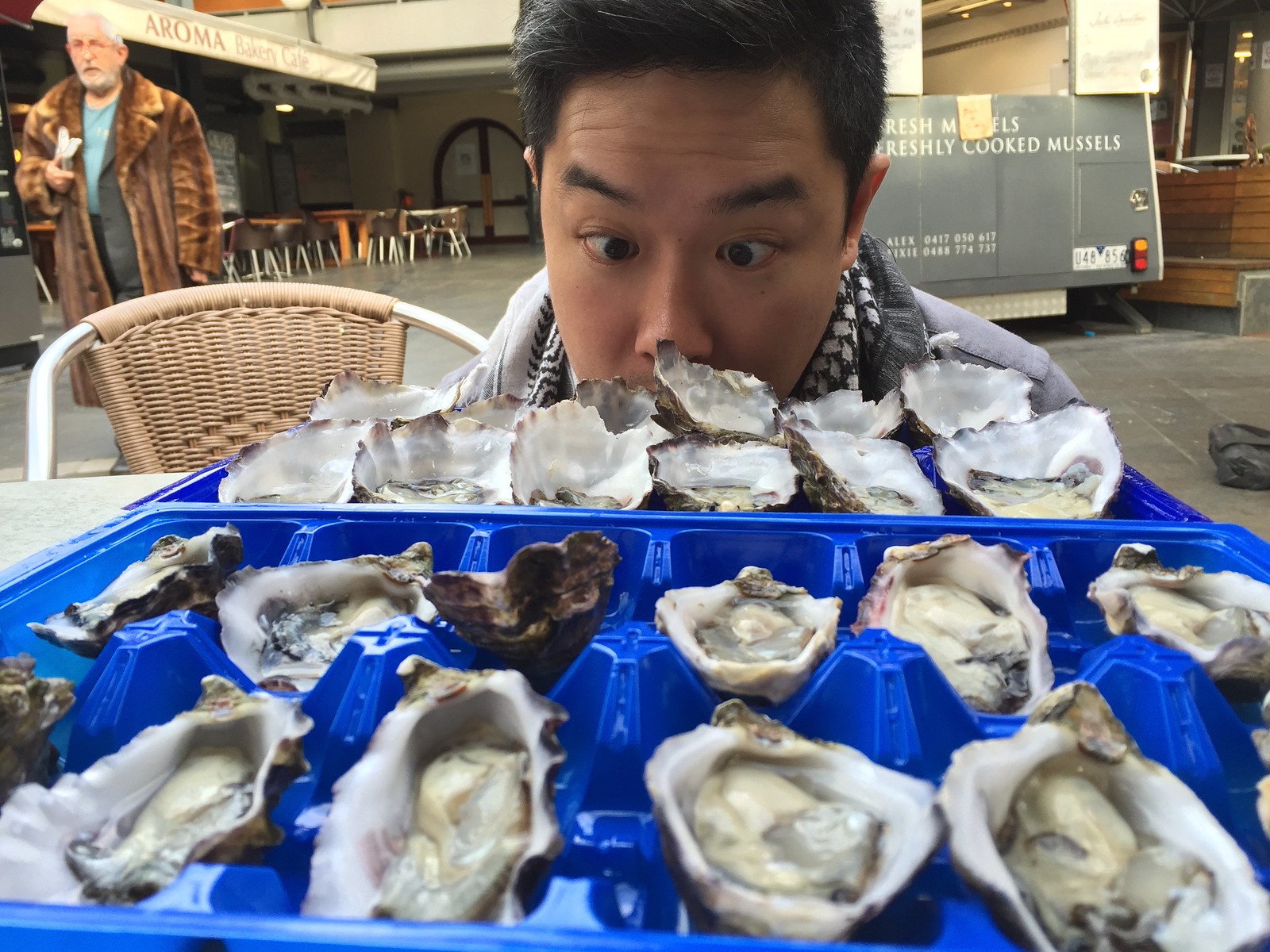 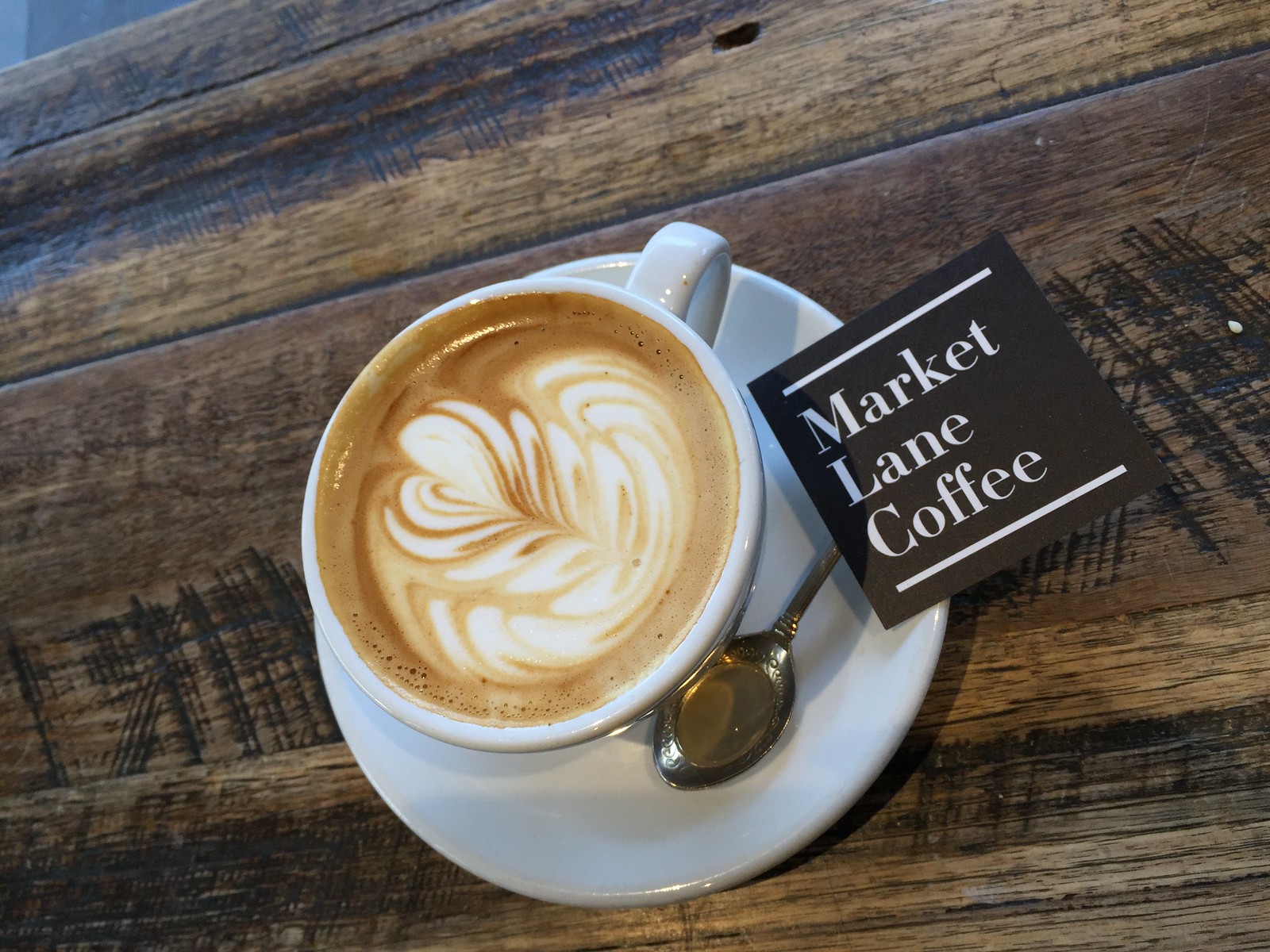 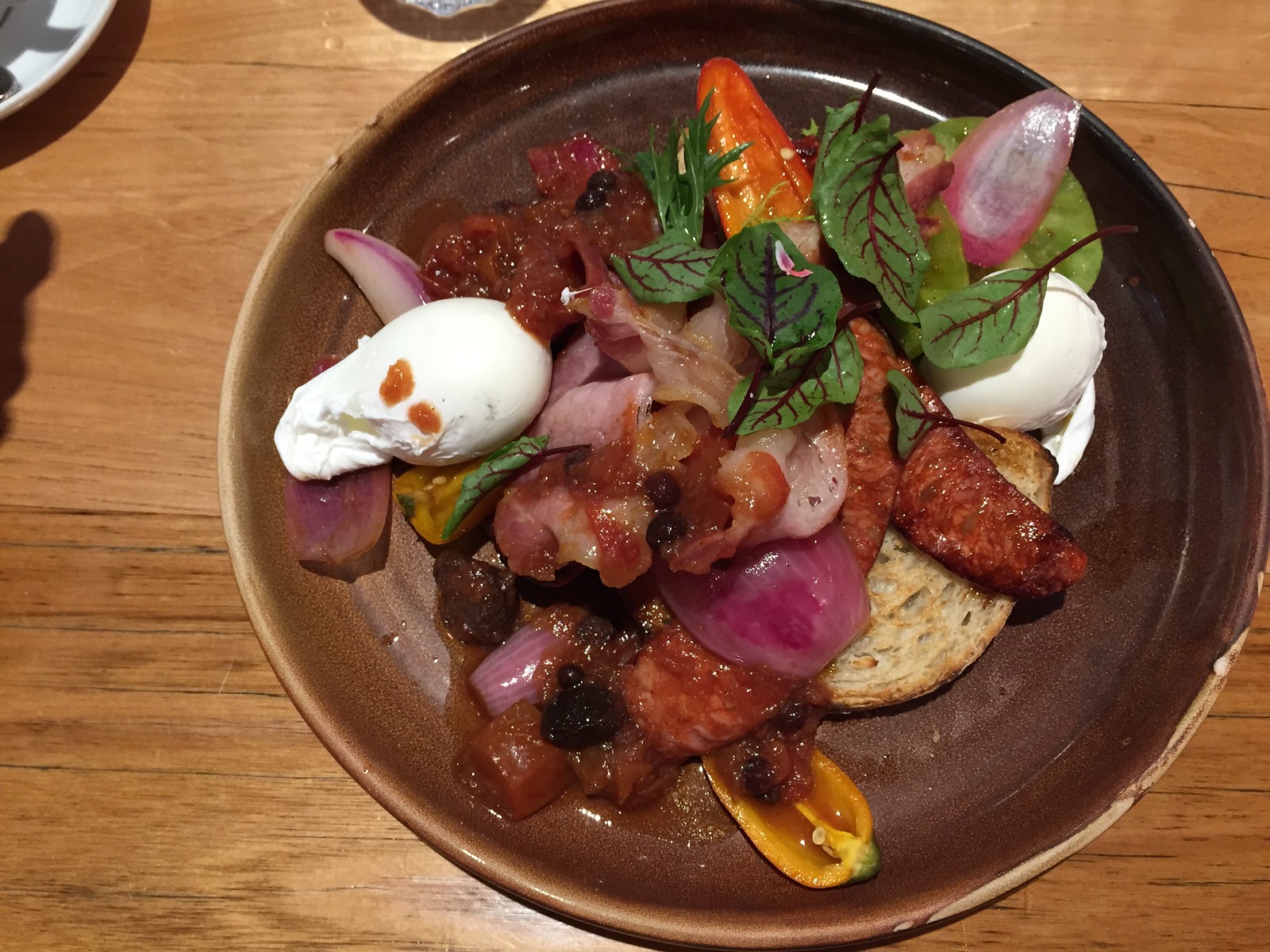 Coffee lovers should also check out Market Lane coffee – their coffee beans are sourced all over the world and roasted in small batches at the market itself. Brunch is the thing to have when you are in Melbourne. Top Paddock was our first brunch spot and to say that this place was popular would be an understatement. We waited approximately half an hour for a table and apparently, 30 minutes is considered to be ‘normal’ waiting time. The food and ambiance was enjoyable but we felt the wait was not directly proportional to the palatability of the food.

Luna Park, a 104-year-old amusement park is possibly the most popular landmark of St Kilda. It isn’t your typical theme park as the attractions and rides are more ‘mellow’. Definitely not for an adrenaline junkie looking for heart-pumping, action packed rides. Its old charm is slightly reminiscent of Coney Island (as depicted in movies/media) and feels quainter at night than in the daytime. 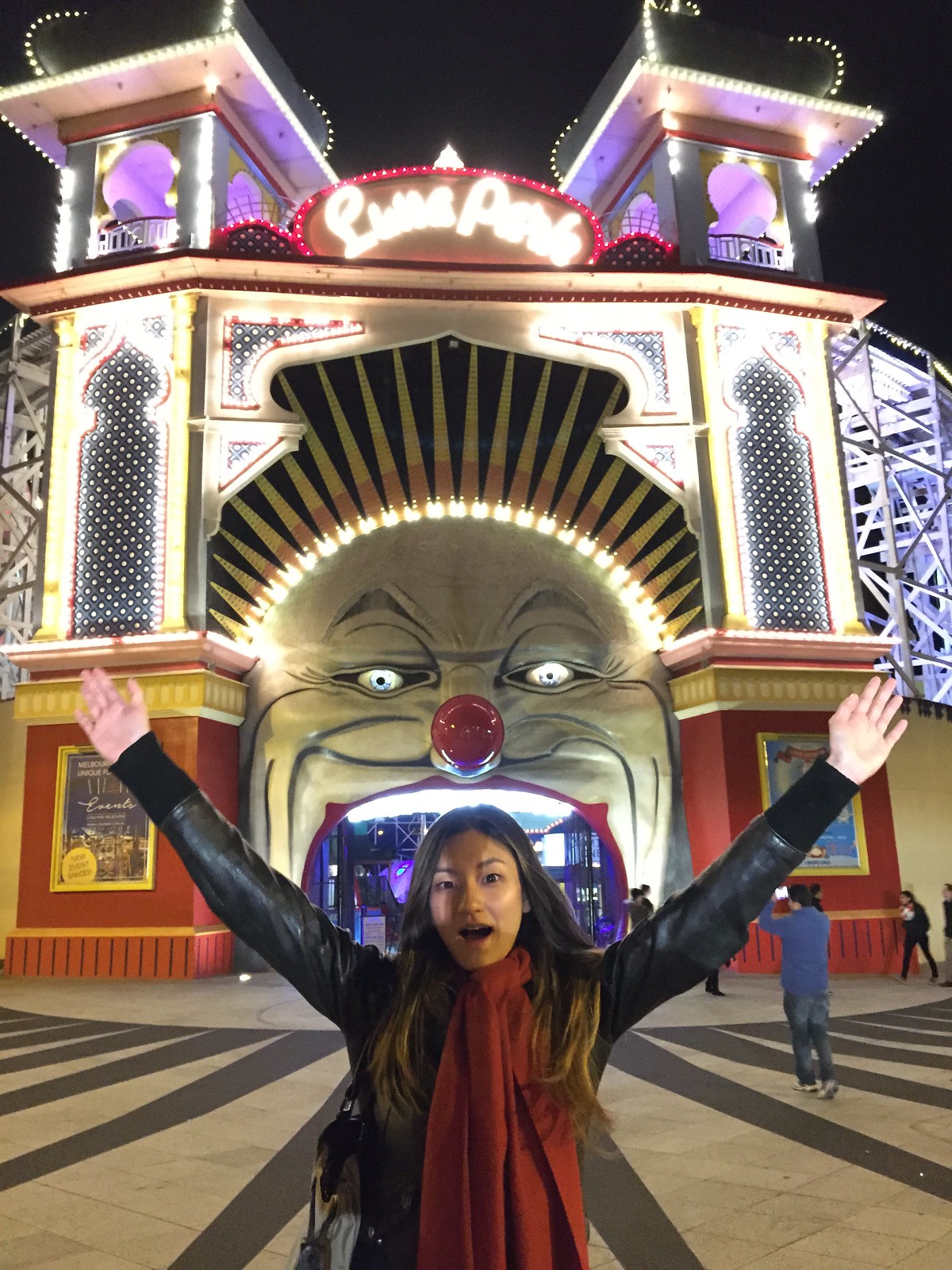 The writer at Luna Park

St Kilda was the first place we visited on day 1 and will forever be etched in our memories as the longest walk we’ve ever attempted immediately upon landing, during a winter holiday. Being ambitious on our first day, we walked from South Yarra to St Kilda not knowing that it would be about 5 km far. I can barely recall how we made our way back to the apartment after our visit to St Kilda. 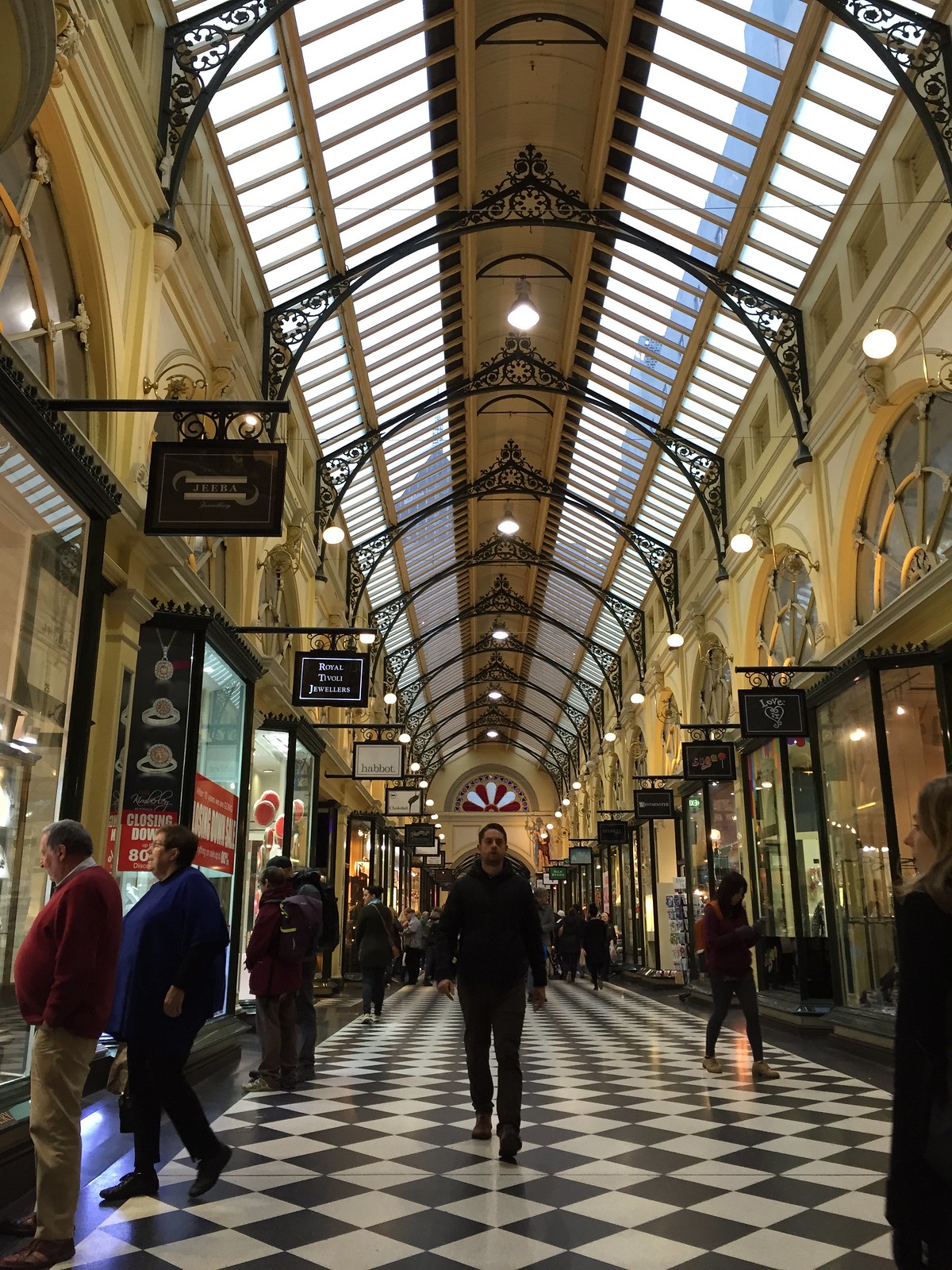 We spent half of our time in Melbourne central, walking through the many branching lanes, streets and hidden atriums all the way up north towards Queen Victoria Market and Lygon Street. On our fourth day, we geared up to take the Capital City Trail and jogged along the banks of South Yarra River leading into Federation Square, about 3 km in length. 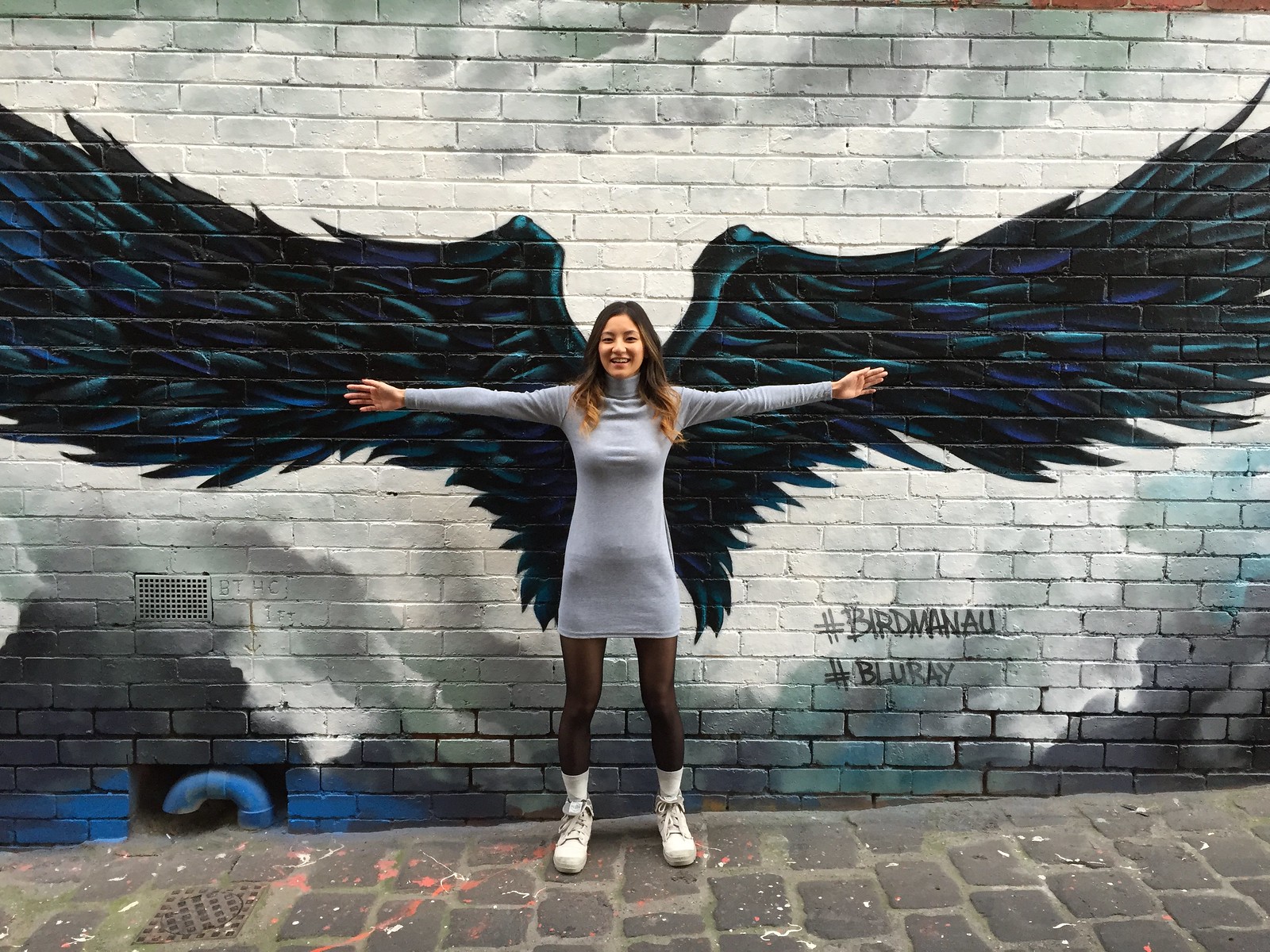 For not-so-regular joggers, you will instantly feel motivated and revived just jogging along the trail as it is a common sight to see the locals using the trail at any time of the day – be it cycling, jogging, walking or even rowing in the river. 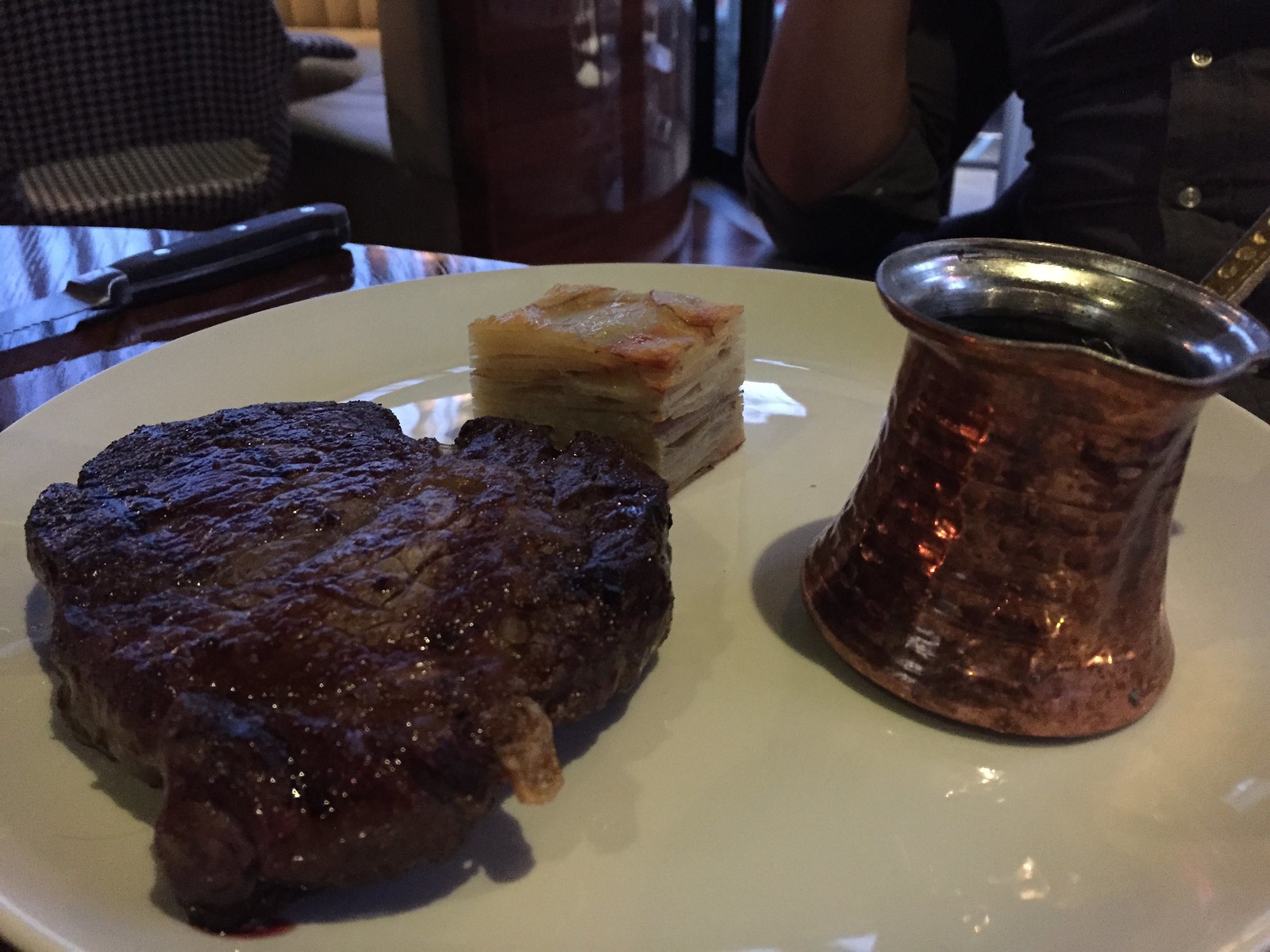 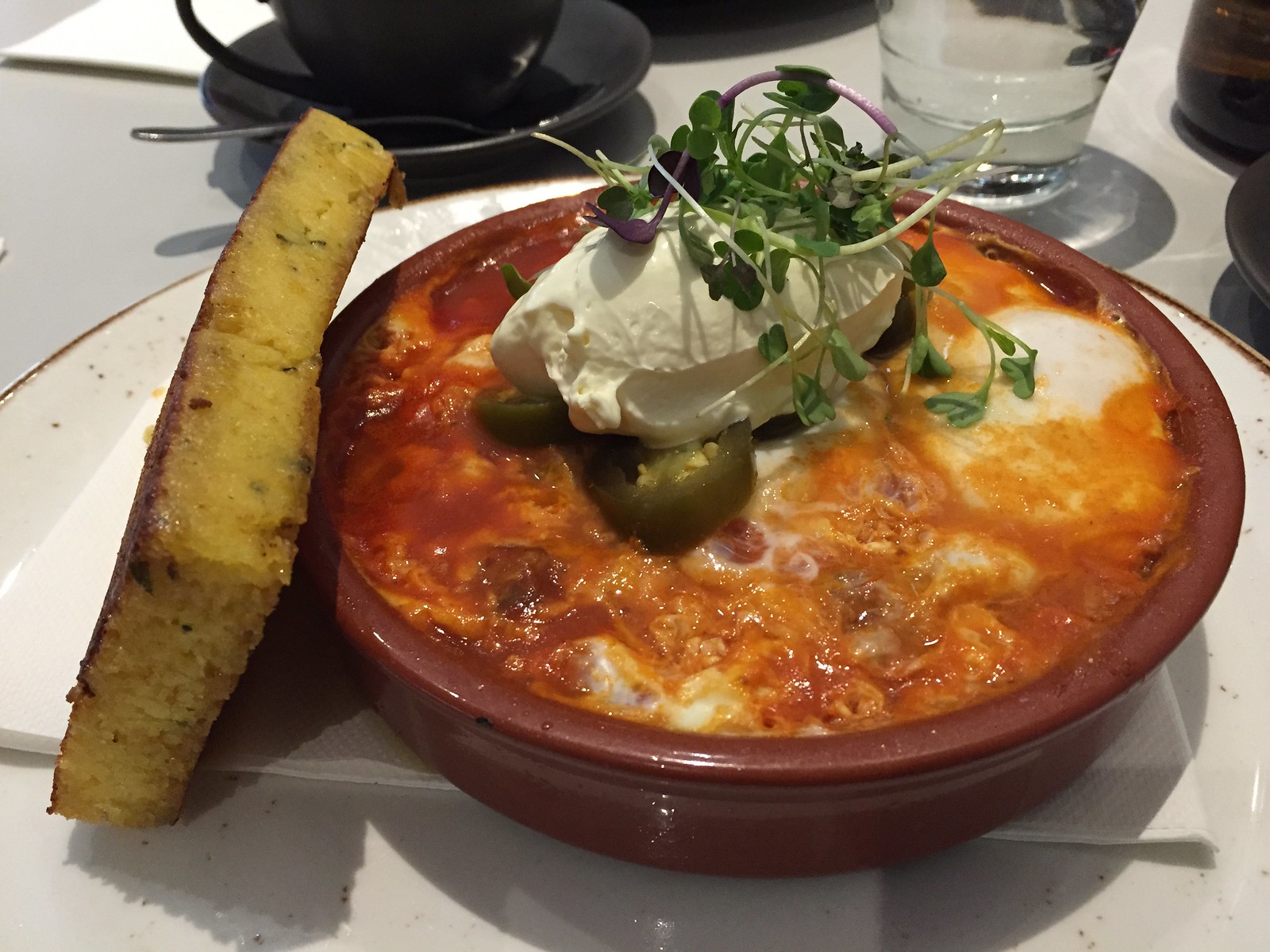 Our next pit stop was the Queen Victoria Market for another round of 2 dozen oysters (going for the same price at Prahran) and a bratwurst hot dog each. If you are a fan of yakitori bars, Izakaya Den will seriously challenge your tastebuds and elevate your Japanese gastronomical experience to a whole new level. Tucked in the basement of 114 Russell Street, this hip underground restaurant/bar is unpretentious and the menu boasts a variety of grilled yakitori dishes with a western twist. 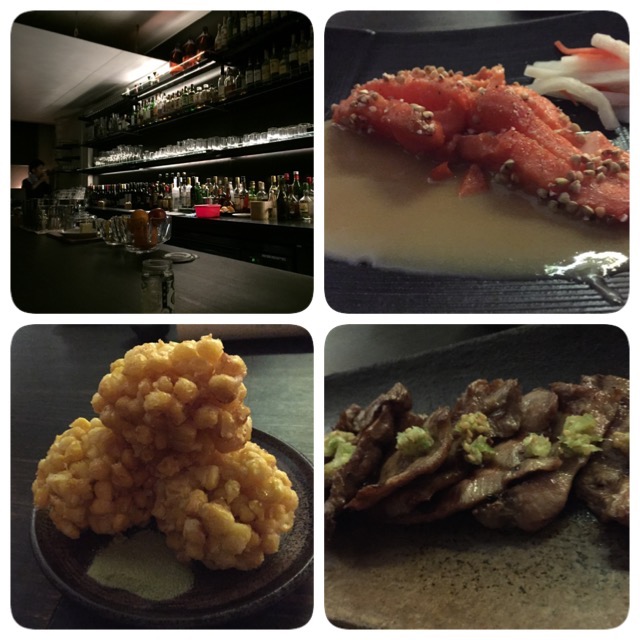 We thoroughly enjoyed our meal and it took tremendous willpower to restrain myself from ordering the entire menu. I’ve always thought of umami as a very subjective taste sensation, but it’s no wonder that the Japanese were the first to officially identify this to be the ‘fifth’ taste and more often than not, is clearly evident in their cuisine. 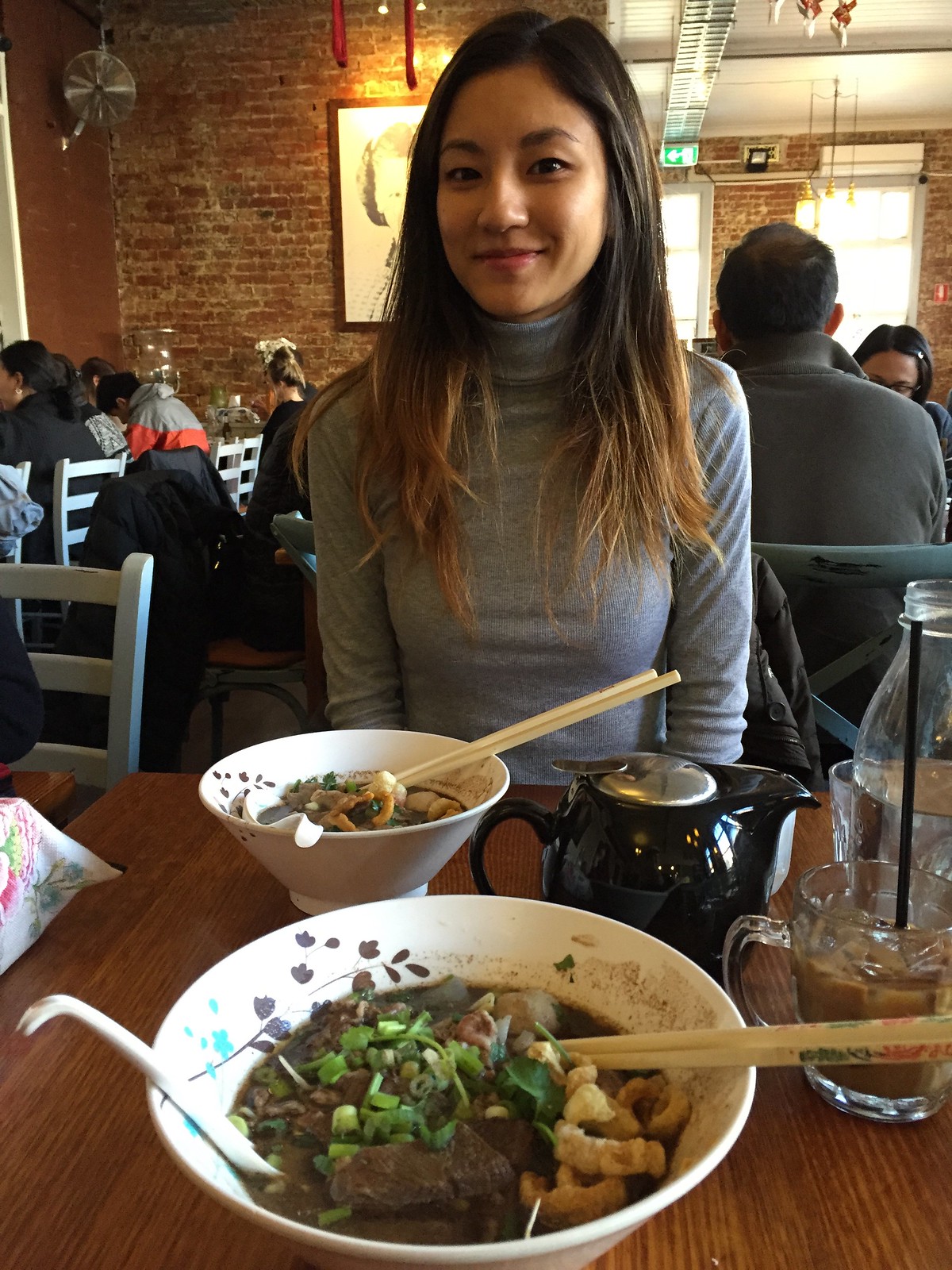 Melissa, tucking into the Boat Noodles at Jinda Thai

A suburb of Melbourne 3km from the CBD, there plenty of Vietnamese eateries to choose from along Victoria Street, many specialising in Pho. We did not have much luck with pho as the restaurant we tried was nothing to shout about. However, the Thai food at Jinda Thai is a must try. Do make a reservation or be prepared to wait in line because it is clearly a favourite joint amongst the locals. The boat noodles here was one of the best I’ve ever had and I have to say tops the ones I’ve tried in Bangkok.

Disclaimer: a truly authentic boat noodle dish uses either cow or pig’s blood to add more flavour to the broth and this version to me is as authentic as it gets. Served with fresh, crispy pork crackling and fragrant Thai basil, you will not regret ordering a bowl or two because that first taste will leave you wanting more. Trust me! 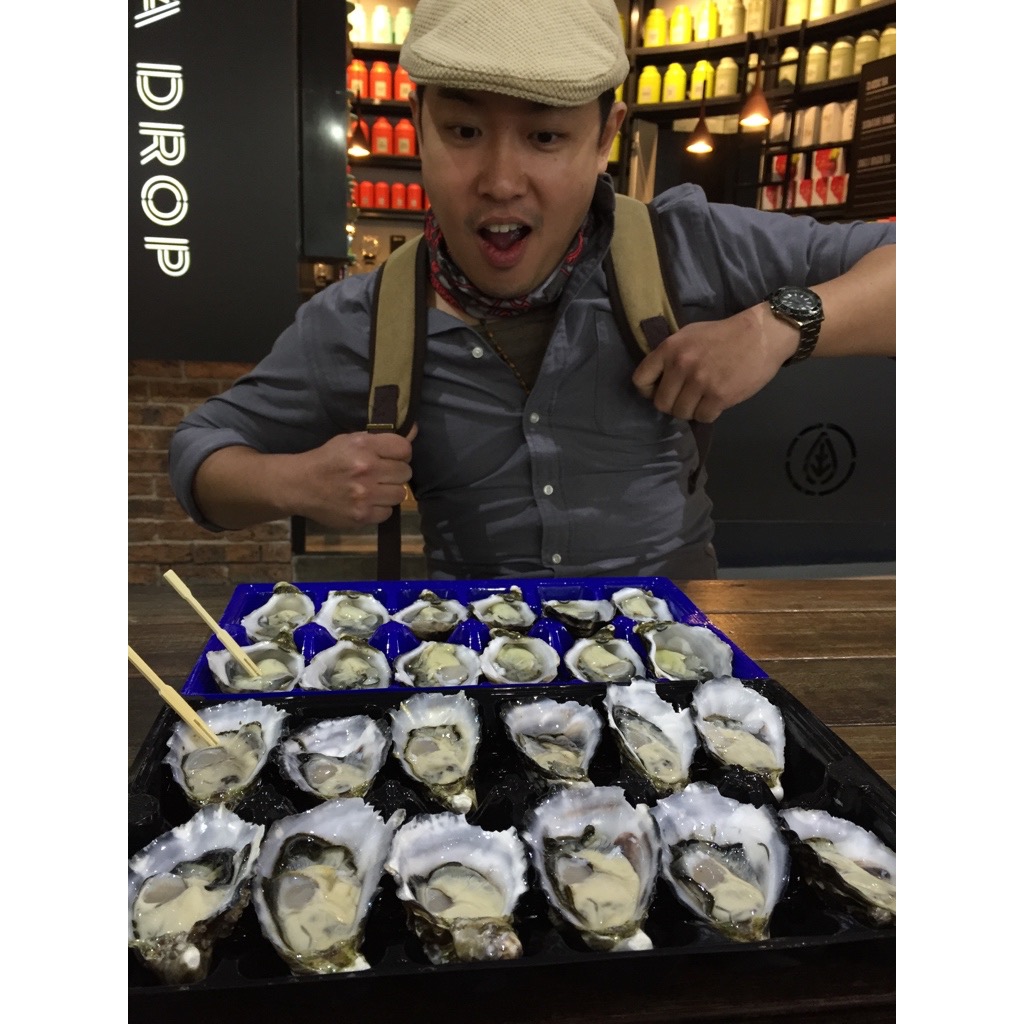 Towards the end of our stay, we visited the South Melbourne market for one reason only – oysters. Up till then, we already had 4 trays of oysters between us (4 dozen) and decided to complete our oyster hunt by ordering another 3 trays at the market. To justify our oyster binging, fresh oysters in Malaysia are triple the price and nowhere as good (quality wise) as the ones you’d get in Melbourne. South Melbourne market offers a wider variety of oysters to choose from, ranging from $12 AUD to $18 AUD per dozen. Our favourite was the St. Helens Tasmanian oyster but even the $1 AUD oyster shots were totally worth the visit. 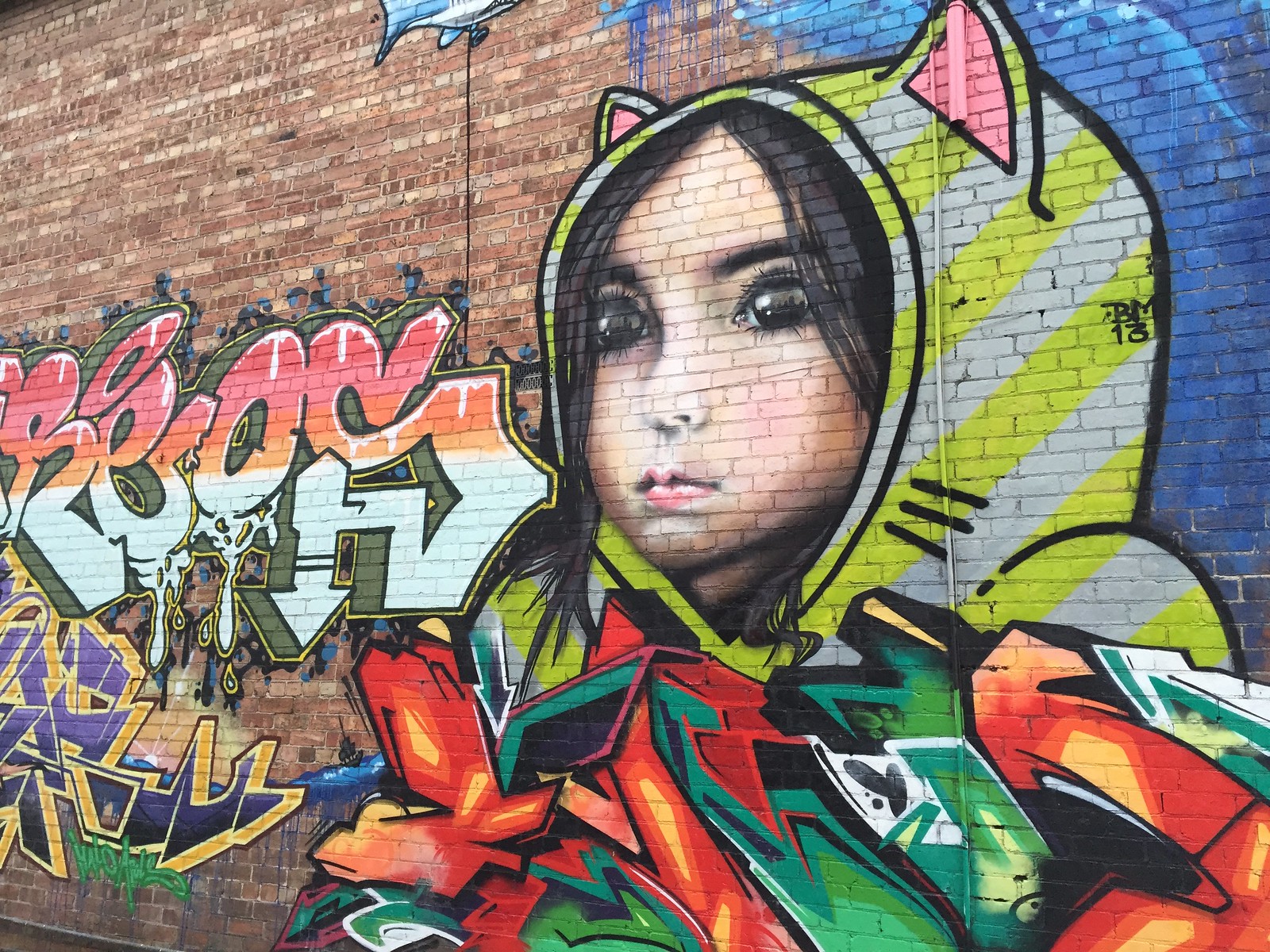 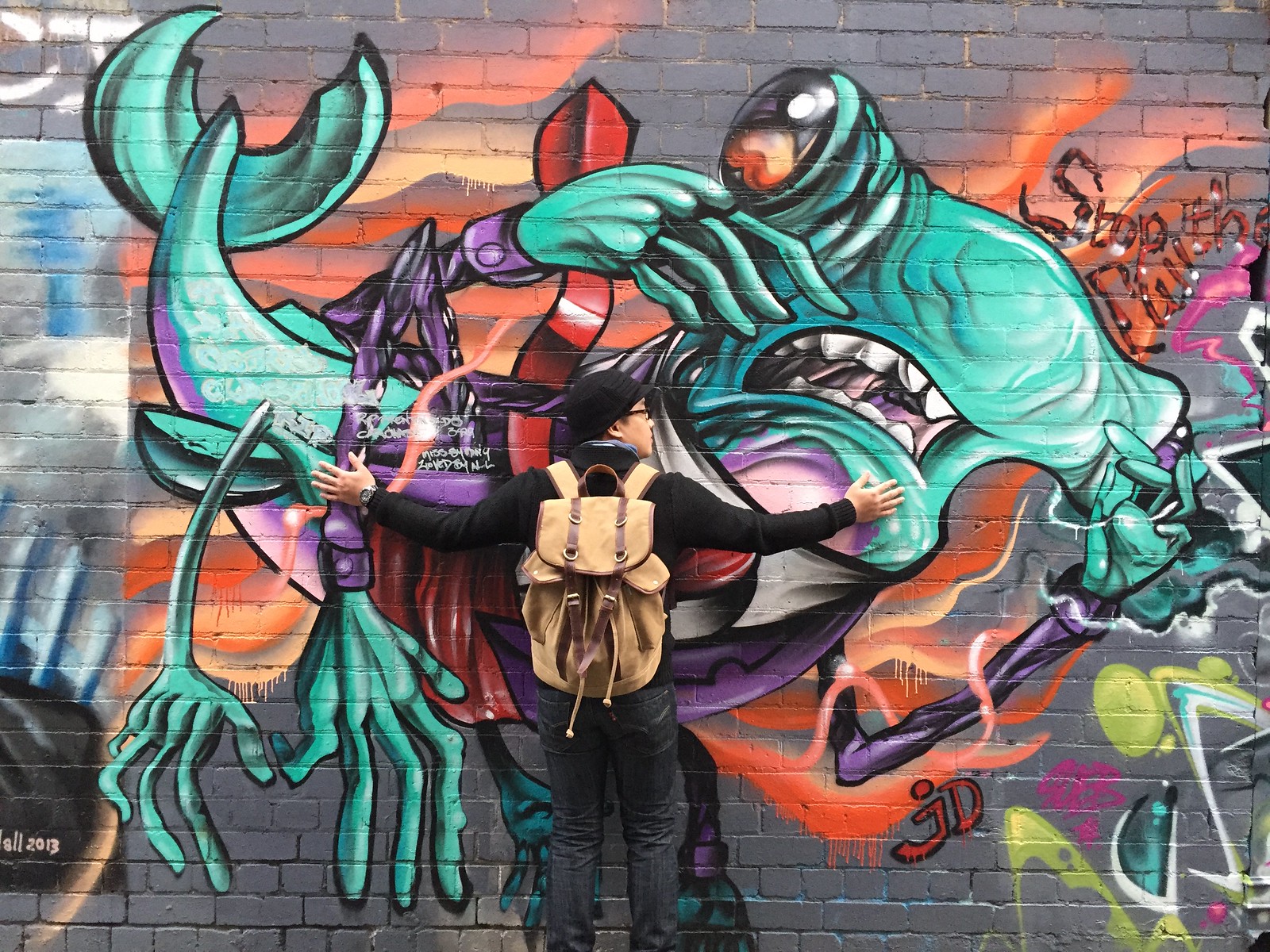 The most cost effective way to travel around Melbourne is to get a weekly visitor Myki pass. Depending on where you wish to travel, visitors should take note of the various travel zones as the price will vary based on the zone segregation. There is also a free city circle tram that operates within the CBD and is quite convenient for inner city travel. We would definitely return to Melbourne again in the near future as there is so much more to explore outside of the CBD area. 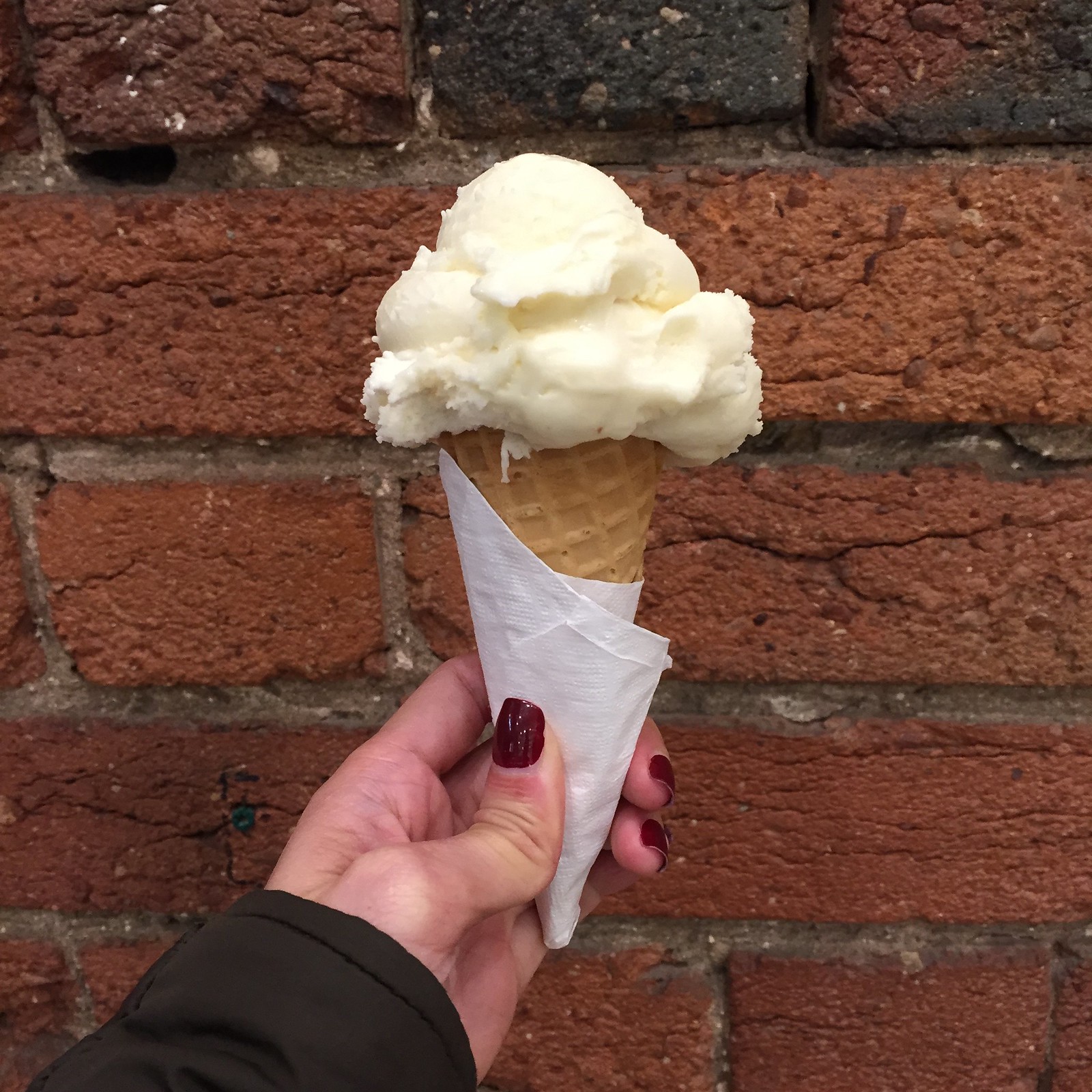 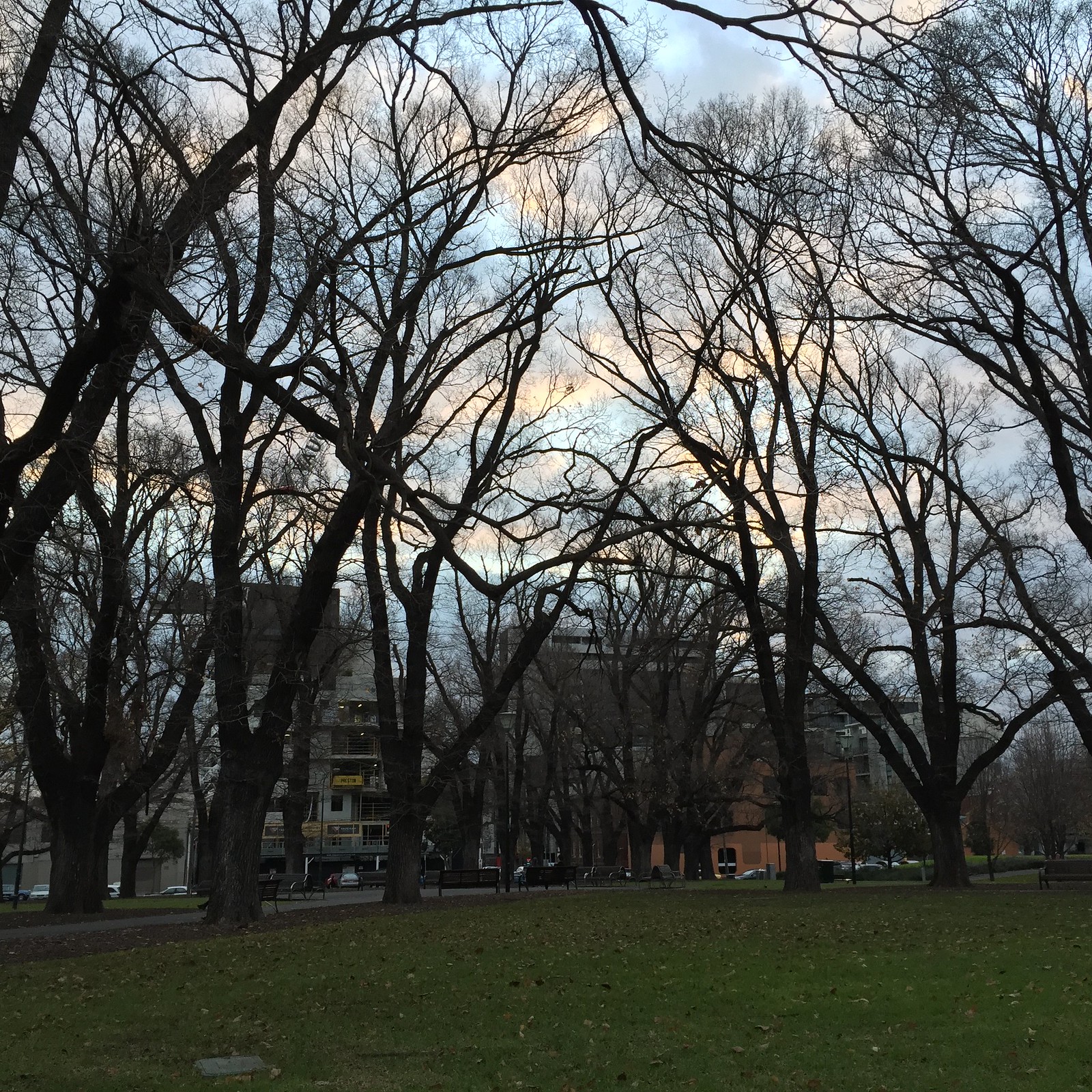 Our next challenge would be driving in Melbourne and before that time comes, I’ll be wishfully hoping that hook turns will be abolished as I still can’t wrap my head around this mysterious road rule and no, it’s not because I’m a female driver. Until then, thank you Melbourne for the memories!