About the guest writer: 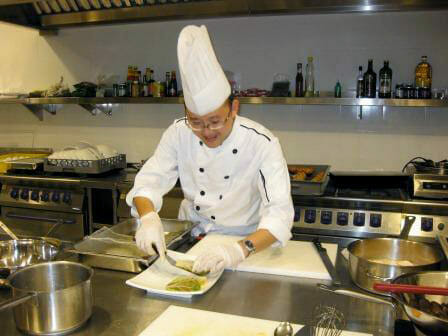 I’m pleased to introduce this month’s guest writer, Eddie Tan. He is the Program Coordinator & Chef Lecturer of the Centre for Culinary Entrepreneurship at HELP CAT College of Arts and Technology.

Eddie’s career took off after he obtained the prestigious Certificat d’Aptitude Professionelle (CAP) specializing in French Cuisine. He has since traveled the world working in various sectors of the food industry. He has accumulated 15 years of industrial experience and 8 years of teaching experience. Focusing his research into culinary education, he hopes to contribute in improving the learning environment of the younger generation particularly those planning to indulge into food related industries. Award recipient in food competitions as well as heading the kitchen for a catering company that won Caterer Company of the Year (Bermuda 2001) 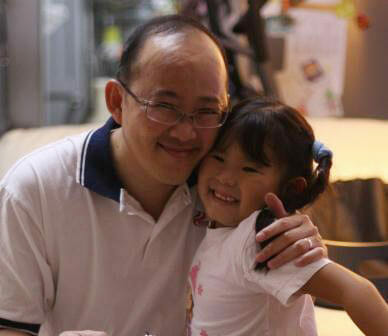 Eddie, with his daughter Jamie

Never in my life did I ever imagined or dreamed of becoming a chef. Being an extremely curious child, not to mention notorious and temperamental, I never liked to follow rules (my poor parents had to put up with me…now I know because my daughter has quite a bit of my character). I remember when my parents bought me toy robot back in the 1970s, it was kind of the state of the art thingy with a “tv projector” on its chest. After just about a week into playing and staring at the “TV”, I had to find out how it works (LCD and LED were not invented then).

With dad’s tools, I looked for every piece of screw I could find and took the robot apart till I reached the “TV” on its chest. I don’t think I found out how it worked though, otherwise I would have been an engineer today! Long story short, the robot was never seen again (buried in the backyard to avoid being scolded by my parents).

My mom asked me to cook dinner when I was about 7. The menu was to be some burgers, a rare treat for the family. As usual, following the rules would mean grilling the burger patties and serving it on buns (boring!!!). I chopped it up and added eggs to it, plus other secret spices and herbs which I have no recollection of. All I remembered was plenty of leftovers and they all went our dogs.

Somehow, I always knew I would be a teacher but one of my aunts encouraged me to do something else instead. At that point of time, there was a newspaper article on the “in-thing” of a career in Hotel and Food & Beverage industry in 1990. An aunt showed me the article and said, “Why not give this a try?”

While waiting for my STPM results, I applied and worked in various jobs in the F&B line, starting with waiting tables to kitchen helper scrubbing floors, pots and pans. After a few weeks, the chief cook taught me how to use the wok for frying noodles. I was hooked ever since. 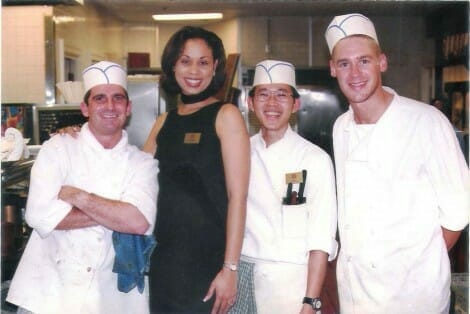 An international hotel advertised to recruit potential applicants to participate in a French apprenticeship program for cuisine. More than a hundred applicants applied and I was one of the twelve chosen. During those days, there were hardly any established culinary schools in Malaysia and being a chef was not viewed as a good profession by most parents. I remembered during my apprenticeship days, one of the chefs told me that I should not be choosing this field as no one will marry me (I think he got divorced twice for reasons I do not know to this day).

My career life as a chef …

I went abroad to work as a cook and worked my way up for approximately 10 years. It was an awesome time in my life where I got to travel and handle various different F&B functions including private island catering, wok food on a private yacht, corporate lunches and dinners. I came back to Malaysia after the September 11th incident, and a local college offered me a job to teach culinary. It was to me a sign to get back to my first ambition of becoming a teacher.

Being an experienced chef does not mean one can naturally teach. I found that out the hard way when the students I taught in the early days could not really grasp nor remember a lot of the cooking techniques.

My personal views on what current and future chefs need …

The culinary world is too wide and diversified to include everything in a 2 to 2.5 years diploma. Therefore, the fundamentals of food knowledge are the key where one should learn the sciences and arts of ingredients, cooking techniques food hygiene and nutritional values. An additional skill that a culinary student needs to learn is to be highly adaptable. The current Gen-Y market craves changes and new trends frequently.

Not many food establishments can stick to the “same old stuff” for too long if they plan to sustain their business. Look at molecular cooking; it is already a passing trend. I see greener chefs with sound environmental practices to be in demand for the future industry. The appreciation of natural product is like an evergreen song that never goes out of fashion. Food shortages are already apparent in many parts of the world. The role of chefs should also shift towards minimizing wastage and maximizing yield. Menu and production planning will become even more crucial.

To be a chef, you need a passion for all things food and the willingness to get your hands “dirty”. Like taking risks and constantly experimenting beyond opening up and burying the toy robot!

For those of you who went to the last Food Bites event, you probably came across the stall set up by Eddie and his team of students. I was really impressed with how he guided them to come up with their interpretation of gourmet food using a mix of local and imported ingredients. The end result was not only tasty; it was also well presented.

I can somewhat relate to Eddie’s experience; I graduated in Advertising Design with majors in Copywriting and Design. A few years later, I found passion in feature writing as it was less stressful compared to working in the advertising industry. Bangsar Babe allows me to be myself in expressing my views. And one of the best thing about writing this blog is my freedom of speech. :)