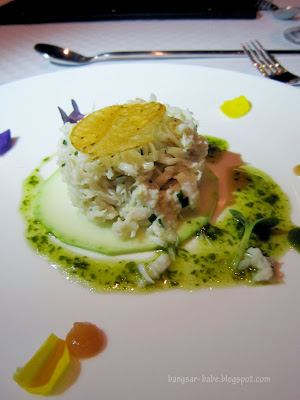 When I dined at Tanzini, GTower Hotel earlier this year, Upper Deck was still work in progress. I was informed that it was going to be a contemporary fine dining restaurant using fresh and quality produce. Six months later, rif and I received an invite to fine dine at the Upper Deck with a few bloggers. 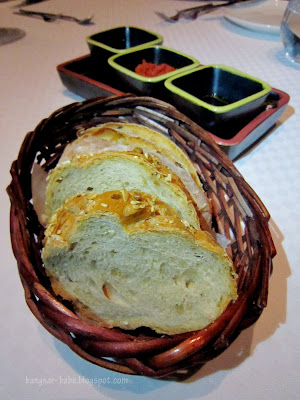 The menu is seasonal, so you probably wouldn’t see the same dishes in subsequent visits. Décor was simple, yet tasteful and the ambiance was conducive for proper conversations.Our amuse bouche was a tastefully presented crab salad. The flavour of the crab was almost unadulterated – it was sweet, salty, flaky and lively all at once. 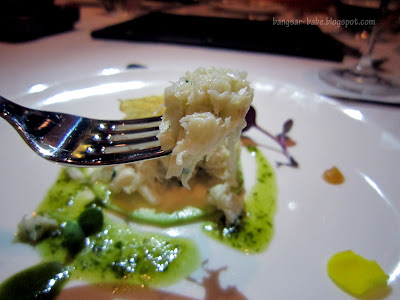 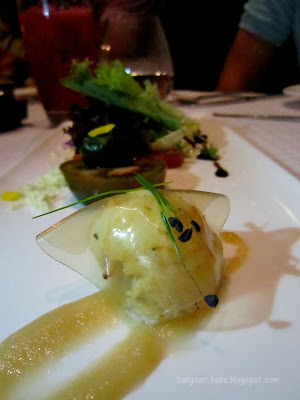 The Baby Lobster Tail Salad came with an interesting basil ravioli on an assortment of heirloom tomatoes, garden greens and aged balsamico. I enjoyed the tomatoes, which were fresh and sweet with a slightly tangy centre. My only complaint was the sharing of appetizers as the halved portions were too small to enjoy. The lobster tail would have been crisp and incredibly succulent as a whole, but eating only half of it meant halving that experience. 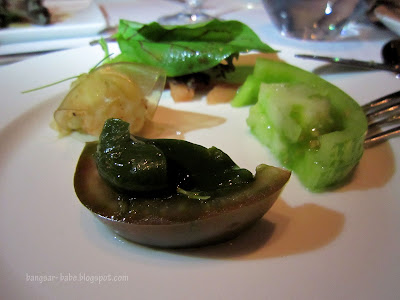 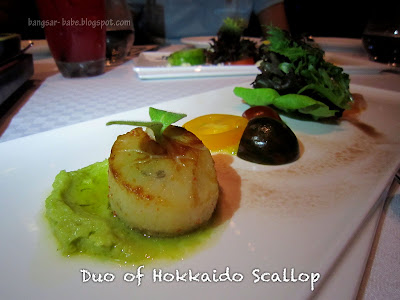 Also good was the Duo of Hokkaido Scallop, which comprised a caramelized scallop, edamame purée and scallop carpaccio with crab roe emulsion. This dish had a very Japanese touch; the carpaccio was sweet and tender with salty accents from the crab roe, while the caramelized scallop was as succulent as it should be. 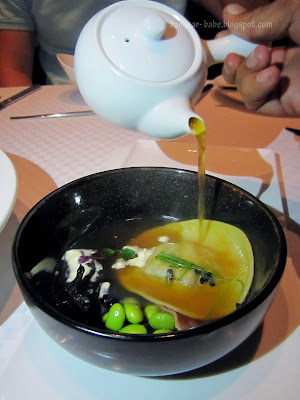 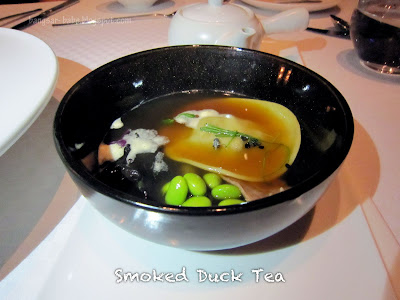 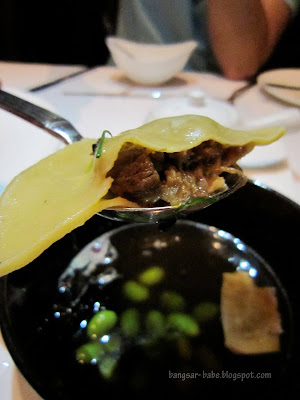 Although light in colour, the duck consommé was flavourful and went well with the ox tongue ragù ravioli. 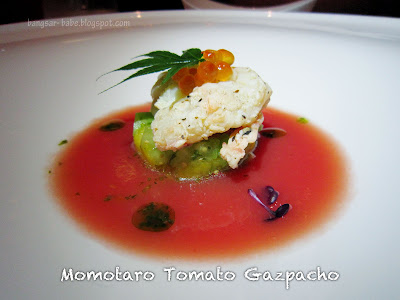 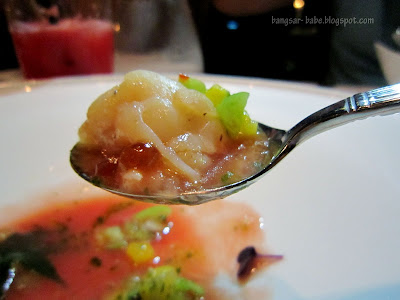 The momotaro tomato soup tasted of spring – green and lively with a meaty bite from the tiger prawn salsa. 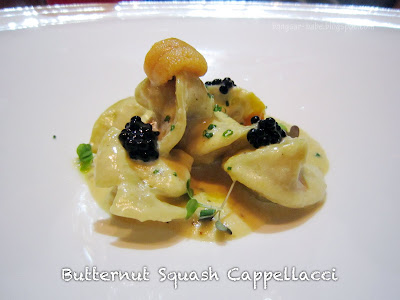 I really wished I didn’t have to share the Butternut Squash Cappellacci with Sea Urchin and Avruga Caviar. The already flavourful cappellacci was given a decadent touch with the sea urchin and caviar. Delicious! 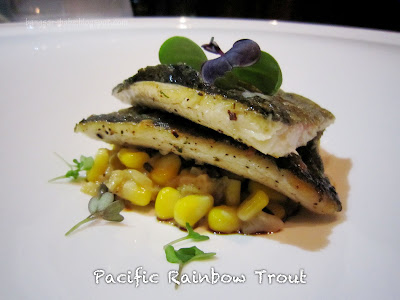 I didn’t care much for the pacific rainbow trout, although I reckon rif liked this. Black truffle (oil, I reckon) gave the fish an earthy, pungent flavour and the sweet corn risotto helped lighten the dish. 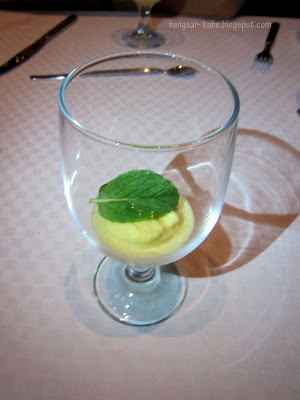 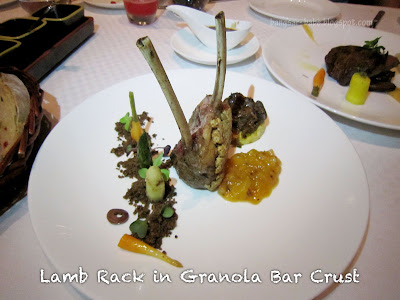 After an intermezzo of citrus sorbet, we were finally at our mains. Unlike the appetizers, portion of the mains (shared between two) were quite generous. We shared the 1824 Beef Tenderloin and Cheek, Lamb Rack in Granola Bar Crust and Fillet of Yellowtail King Fish. When I cut into the lamb, the meat looked rather rare so I thought it was undercooked. Turns out, the chef used the sous vide method to cook the lamb, hence the reddish outcome. I wasn’t aware of this, so I asked if they could cook it ’just a little longer’. 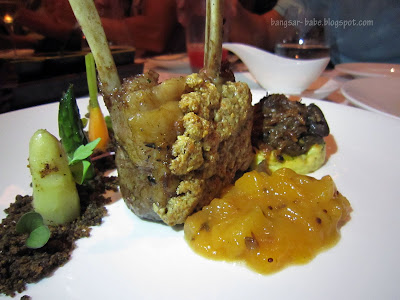 According to Executive Chef Johnny Fua, the lamb was sous vide for 48 hours, resulting in its even tenderness. It was unbelievably tender. This was my first time trying a sous vide lamb and I enjoyed it, despite the seared exterior. After a bit of research, I learnt that sous vide is a cooking method that combines the gentle, steady heat of poaching and an airtight seal, so the food literally stews in its own juices with no air, no water and no evaporation. I especially enjoyed the granola bar crust, which tasted a bit like cookie dough. 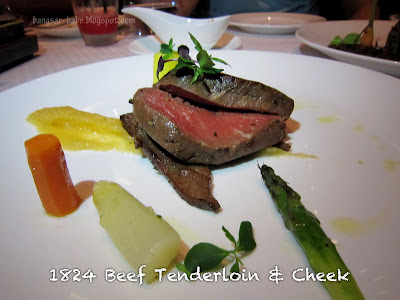 rif liked the tenderloin, but I’m more of a ribeye girl. That said, the zinfandel reduction was both savoury and fruity, which paired quite nicely with the beef. I enjoyed the beef cheek more than the tenderloin, as it had a creamier and richer mouthfeel. 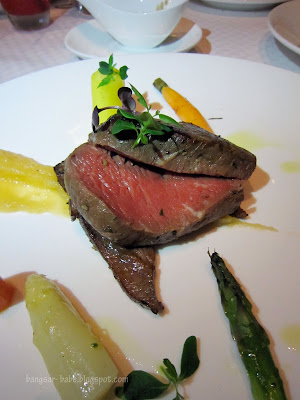 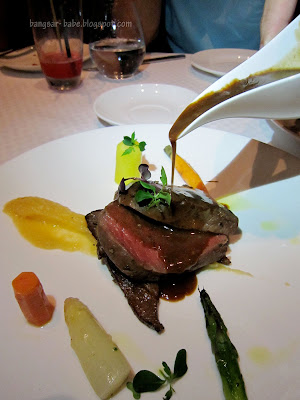 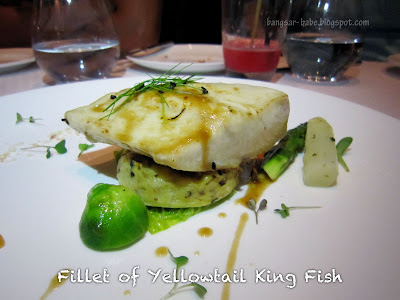 Like the trout, I wasn’t a fan of the Fillet of Yellowtail King Fish. The fish was seasoned with lemongrass and served with braised kohlrabi and fennel broth. I thought the lemongrass flavour was very faint and the fish was too fishy for my liking. 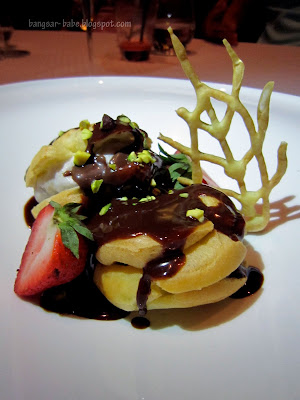 Dessert – profiteroles with banana-coconut sorbet and chocolate sauce drizzle – fell short of my expectations. I thought the sorbet was too icy and the profiteroles had a rough texture. Presentation however, was good.

Verdict: Appetizer portion aside, the food was quite decent and presentation was commendable. 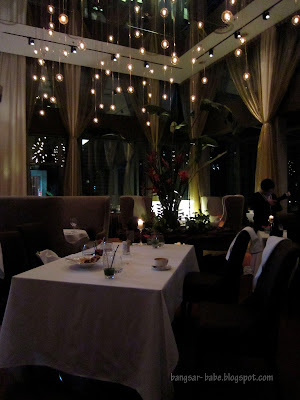