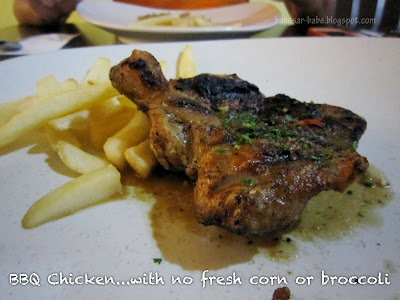 With so many group buying sites around, we now have plenty of options when it comes to getting good deals. That said, I feel some deals are often not worth buying, like the manicure + pedicure deal I purchased a few months back. Instead of having quality nail polishes like the promotion claimed, there were more cheap-quality nail polishes compared to the branded ones. My most recent group buying deal disaster was at Papillon 1973 in Solaris Dutamas. 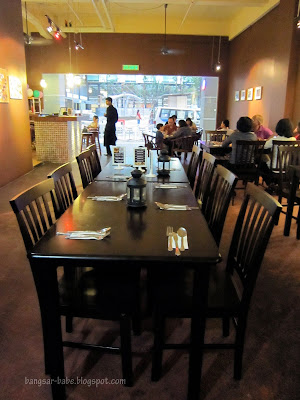 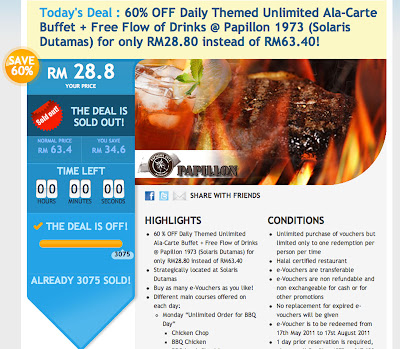 This deal offered diners a 60% discount on Papillon 1973’s ala-carte buffet, so we paid RM28.80 instead of RM63.40. Soon, customers who bought the same deal started complaining about the restaurant and food on the “discuss this deal” section of the page. This has since been removed from the site. When I tried redeeming my deal last week, I was told (rudely) by a man named Sam that there was no such promotion! I then called the next guy Peter who asked me to text him my reservation details. 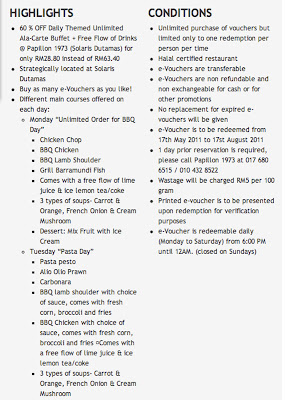 Long story short, rif and I went to the restaurant with our expectations set low. Upon arriving at the restaurant, I was told by the waiter that there were no tables available since I did not make a reservation. After showing them my SMS reservation, they relented and seated us right behind the restaurant (near the kitchen). From then on, both the service and food set a new standard of low for us. 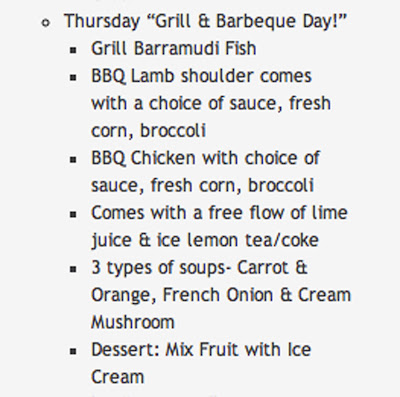 A customer who was redeeming her voucher came up to my table and clarified the deal with me. She too, wasn’t happy with the way the restaurant handled things; we were there on a Thursday (Grill & Barbeque Day). 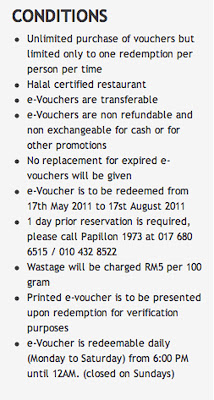 Only two waiters were present and frankly, I thought the guy waiter was useless. He took our orders repeatedly but never put them through the kitchen. Needless to say, anything we ordered with him never got delivered. 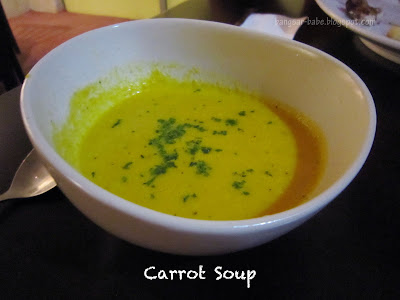 Instead of three types of soup, only two soups were available – carrot and onion. Both the soups were terrible, especially the onion soup which tasted really sweet. The former was very grainy and had barely any taste. 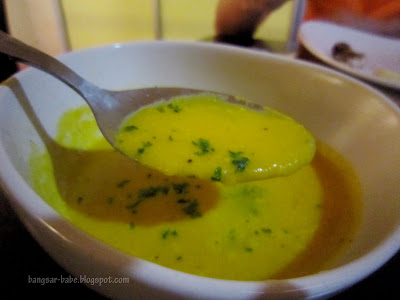 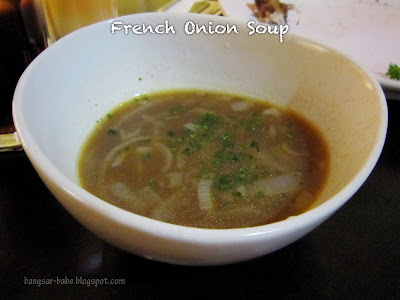 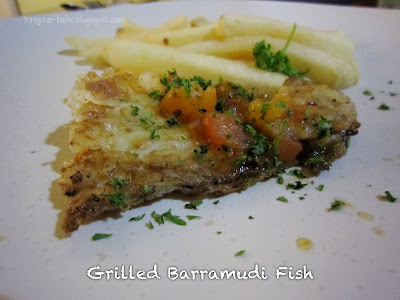 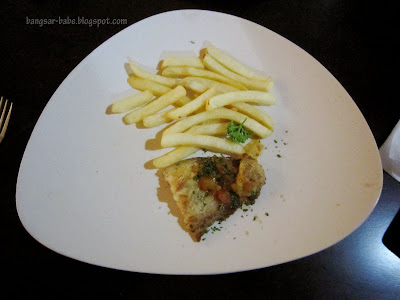 Our mains took ages to arrive. Portion was a joke, and no thought was given to the presentation at all. The deal promised diners a choice of sauce, fresh corn and broccoli. What we got was a fixed sauce and some fries. The grill barramundi fish was crisp on the outside but slimy on the inside. It was as though the fish wasn’t properly thawed. 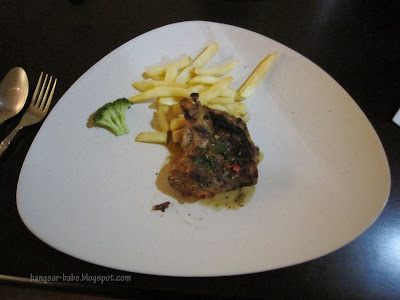 Worse was the chicken, which was dry, tough and burnt around the edges. 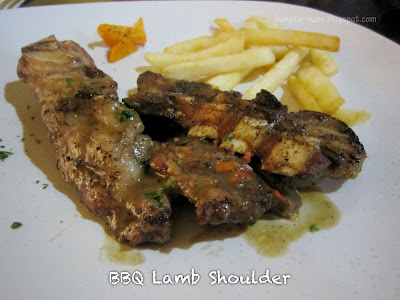 We actually thought the lamb was nicely marinated, but the choice of cut was abysmal. The lamb was way too fat (80% fat, 20% meat) and the meat was way too tough to cut. 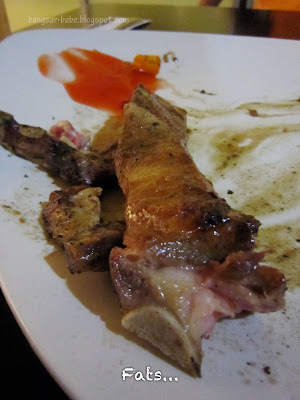 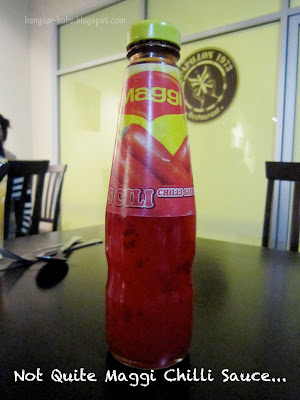 If you ask me, the aglio olio wasn’t worth ordering as the noodles were overcooked and tasteless. 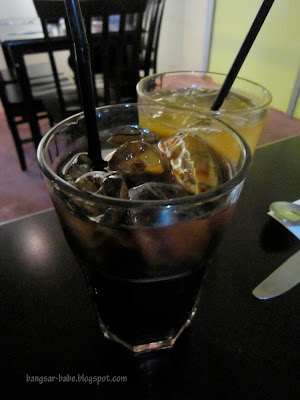 Our drinks never got refilled despite countless reminders and my coke tasted funny. It tasted like the economy carbonated cola you find in supermarkets. rif’s ice lemon tea was merely tea-flavoured water. There were no mixed fruits for dessert; all we got was a measly serving of mint chocolate chip ice cream. 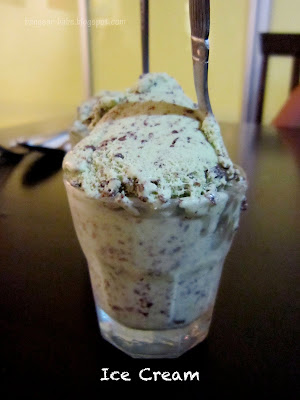 My dining experience at Papillon 1973 was both frustrating and disappointing. Despite the 60% discount, the food quality and portion was not worth RM28.80. If any of you plan to redeem your voucher, please keep your expectations to the bare minimum. If you’re not bounded by the voucher, I suggest you spend your hard-earned money elsewhere. 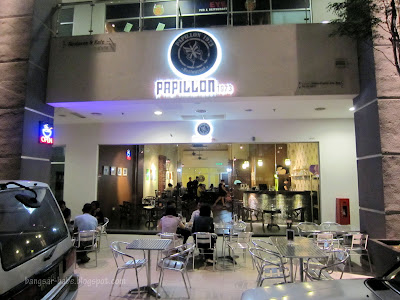