My parents are typically Chinese; especially my father. He insisted on eating Chinese food in London, Nottingham and Paris, I kid you not! And he likes deciding on where to eat. Instead of going to the restaurants of my choice (Gold Mine or Four Seasons), he chose to eat at WONG KEI, at London China Town. 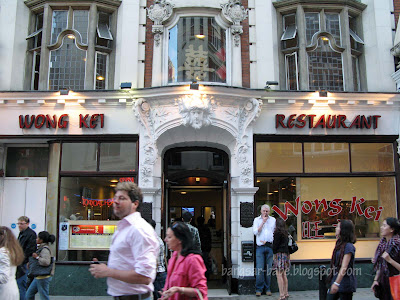 I remember reading a lot of negative reviews about the place, so I knew dinner wasn’t going to be good. But what I didn’t know, was how bad it was going to be. Wong Kei is after all, legendary – for its staff’s rudeness and crammed eating spaces.

We were ushered downstairs, to a dodgy and grubby dining area filled with people — most of them were not Chinese. A good Chinese restaurant would usually be full of Chinese people, at least that’s what I believe. Our waiter was a jerk, who lacked social skills. My mum was incredibly patient – I would have doused hot Jasmine tea on him.

According to my brother, the toilet was disgusting. My impatient waiter hurried us when we were ordering our food. We were given the menu, and expected to know what to order in less than 2 minutes. I was also unfortunate enough to be seated next to an Indian couple, who went on and on and on about arranged marriage, who’s dating who, who’s doing who…etc. All over a huge bowl of wantan soup, which both of them did not know how to enjoy. 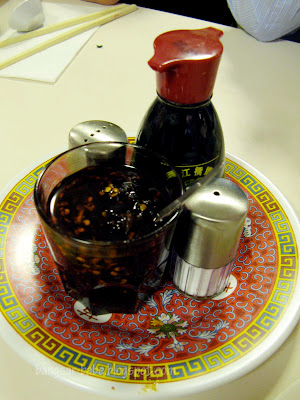 Since my food took 45 minutes to arrive, I had plenty of time to observe their eating habits. No, I wasn’t staring. They were seated so close to me, I could even smell the man’s sweat-cologne combination. *uggghh* As soon as they got their bowl of wantan soup, they added dollops (with a capital “S”) of chilli oil into it – turning the clear soup bright red. Then they proceeded to pour soy sauce into the soup – might as well order wantan chilli soup, don’t you think? 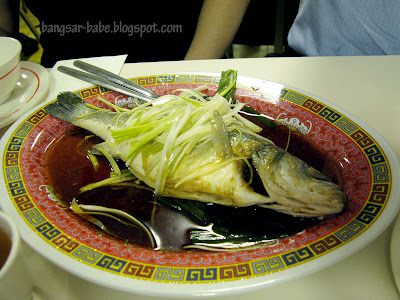 Back to our food. The steamed fish (£8 per portion) looked as though it was plonked on the plate, drizzled with soy sauce and carelessly topped with some spring onions. Horrible presentation, equally dreadful taste. The fish wasn’t fresh, and it was much too salty to enjoy. 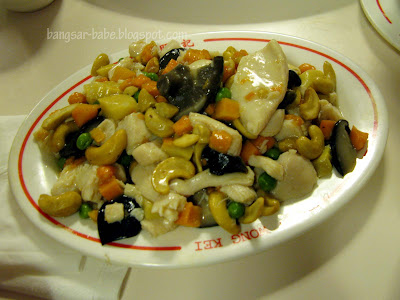 Chicken with cashew nuts (£6) was bland and oily. The chicken pieces had a slightly slimy texture — from the liberal use of cornstarch. I was really put off by the frozen vegetables – they provided no taste and had a weird mushy (inside) yet hard (outside) texture. 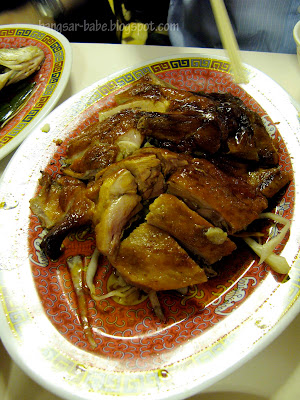 Roast duck (£6) was another let down. It was cold, hard, stringy and terribly gamey. I don’t think I have eaten roast duck as bad as this in KL. The bed of pickled vegetables tasted odd – it was sweet and sour, like a poor imitation of our local acar. 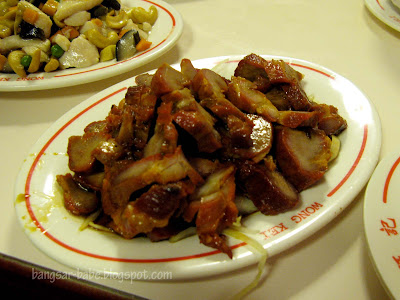 Just when I thought dinner couldn’t get any worst, the BBQ roast pork (£6) arrived. On the same bed of vegetables as the duck. Seriously Wong Kei, go switch the vegetables to lettuce slices or cucumber slices. At least they wouldn’t contaminate the already horrible duck and char siew. The char siew was very, very dry, and almost inedible. It tasted old, and the poor attempt of flavouring it with BBQ sauce simply made everything worse. 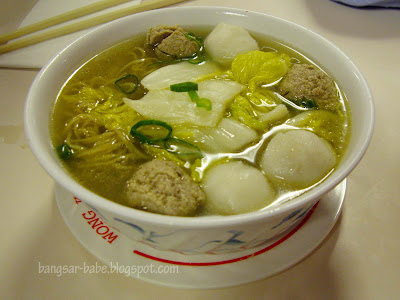 The fish ball & beef ball wantan noodle soup (£3.70) reeked of kan sui smell and taste. I couldn’t finish this. The meatballs and fishballs were very ordinary; probably the frozen ones available at any Chinatown supermarket. And the soup was so full of MSG, I have no idea how the Indian couple could drink the whole bowl. 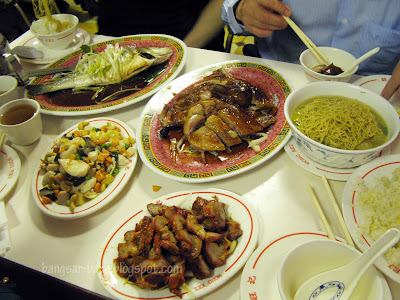 Look at how small our table was!

All in, I cannot say one good thing about the food or the service. While the food was cheaper than what you can get at Bayswater, I still wouldn’t pay to eat such gawd-awful-food. My dad kept mum throughout the whole meal, because he knew he made a poor decision on dinner. *chuckles* 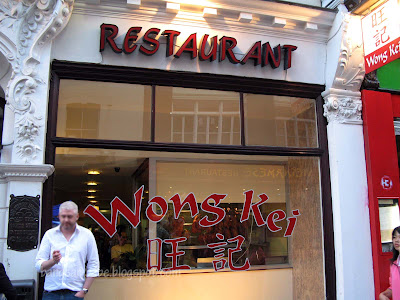