During a recent dim sum session, KC (rif’s colleague) suggested I do a showdown of food within the same category. I liked the idea, and decided to do a burger showdown. Now, before you roll your eyes and go “Again? Not another burger post??”…READ ON.

This is not just another Ramly burger face-off. I decided to go with the fruit theme, so this time around, it is the battle of the fruit burgers – GREEN APPLE BURGER vs PINEAPPLE BURGER. 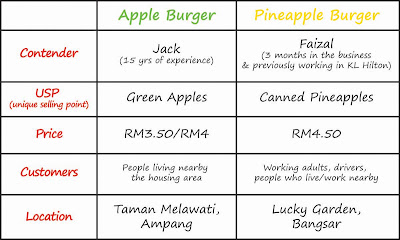 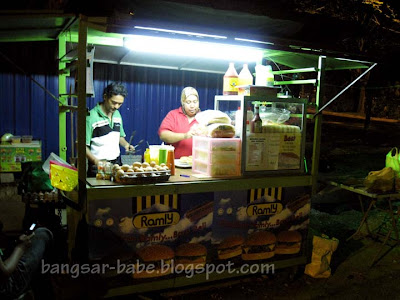 Manned by Ana and her husband Jack, this burger stall is located in the housing area of Taman Melawati, Ampang (behind Zoo Negara). While finding your way there may be a bit tricky (don’t worry, I have the GPS coordinates), it’s easy to spot Ana’s stall – it has fluorescent green lights. On average, they sell a minimum of 120 burgers a day, which I find pretty impressive considering their location. They are open for business from 5.30pm till 11.30 midnight, or until they are sold out. It’s best to call ahead to avoid disappointment. 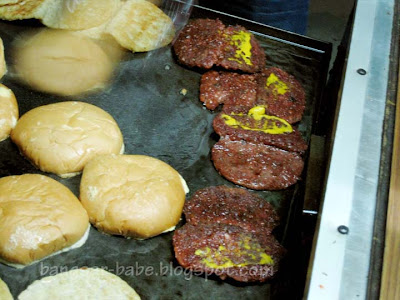 Jack is in charge of the grilling, while Ana assembles the burgers. While other burger makers take pride in their special seasoning, Jack believes the seasoning plays the supporting role, while the tastiness of the patty is what makes a burger outstanding. The patties are butterflied and placed on the hot grill. Then, a generous spread of mustard, dashes of Worchester sauce and shakes of black pepper are added for extra flavour. We opted for the kawen burger, which is a mix of beef patty and chicken patty between a grilled burger bun.(“Kawen” means married in Malay, and in burger context, it’s a “marriage of patties”.) 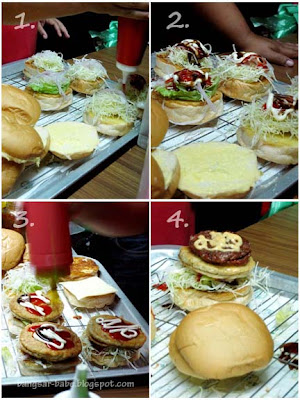 Ana places some lettuce leave as a bed on top of the bun base, before topping it with finely sliced cabbage, onions and generous squeezes of chilli sauce, mayonnaise and black pepper sauce. She puts some Thousand Island dressing on the chicken patty before placing the beef patty on top, and finishes off with another squeeze of Thousand Island sauce and mayonnaise. Then, she takes some sliced green apples and places them on top of the patties and places the bun top over it. At that point, I questioned the width of my mouth and whether it could fit such a tall burger. 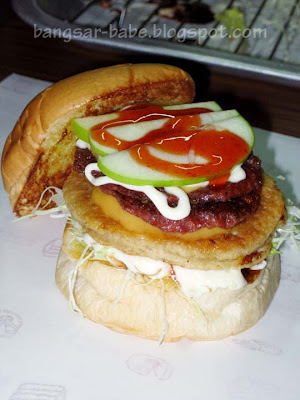 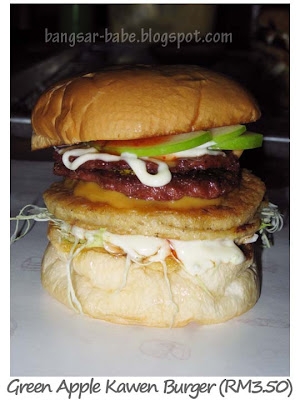 The meat in the burger reminded me of the mattresses in “The Princess and the Pea.” All you see is meat, meat and meat, with hardly any vegetables in sight. However, you can feel (and taste) the vegetables beneath the patties, and the addition of apple slices add height to the already monstrous burger. I thought the meat patties and apple slices enhanced each other’s flavours nicely. I liked the addition of the Thousand Island dressing, as it accentuated the sweetness and the creaminess of the burger. The sourness of the green apple did a good job of cutting through the richness of the burger. 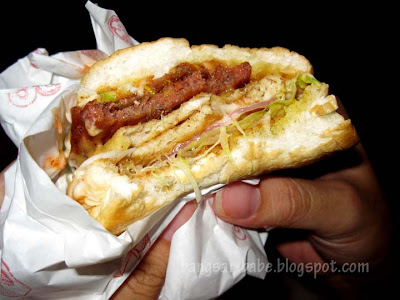 According to Ana, they replaced cucumber and tomatoes with green apples, as they didn’t want the burger to be too soggy, especially with the triple sauce combo. This clever composition was both moist and magnificently filling. Despite the ample portion, it’s hard to stop at just one. I sure as hell didn’t! We ate our burgers in the car, and I realised the kawen version had no egg or cheese (my two favourite ingredients in a burger), so I decided to get the Ayam Special Cheese. 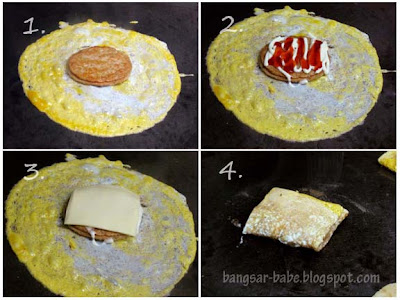 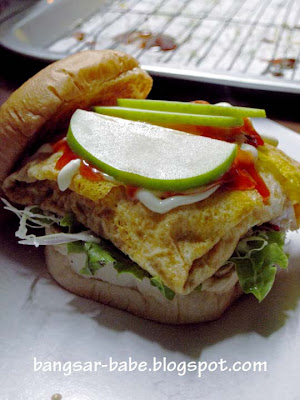 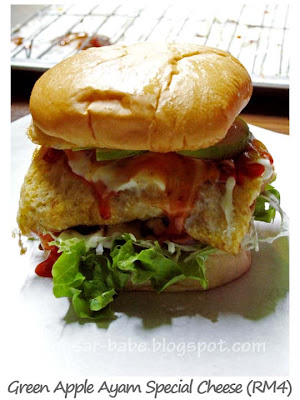 The double chicken patties are wrapped with egg, and a slice of cheese is added inside, resulting in a gooey and meaty combination. While it was not bad, I liked the kawen better. When I was almost done with my second burger, Ana told me they also have Kawen Special Cheese. If only she said it earlier!!! I could not fit another burger into my stomach! 0_o 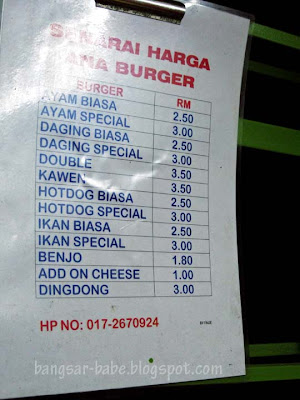 Since there was no 7-11 in that area, Ana got her friend to buy me a bottle of coke. Thanks Ana! Once I was done, I was so full, I semi-waddled my way to the car. I ate ALMOST two burgers (rif had a big bite of my Ayam Special Cheese) within 30 minutes. *Burp* 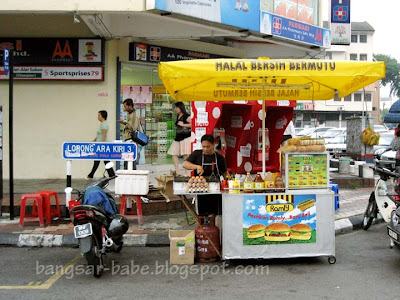 Having started his burger business in Lucky Garden (Bangsar) about 3 months ago, Faizal already has a stream of loyal customers getting their Ramly burger fix. The minute he opens his stall at 6.30pm, the queue starts! I know that because I was one of them. He hadn’t even unpacked the burger ingredients from the icebox and the grill wasn’t hot enough, but people were already waiting; LIKE HAWKS. He mans the stall alone – grilling the patties and assembling the burgers. While waiting for my burger, I noticed his customers came from all walks of life. Some of them took a seat near the famous sup kambing stall, while others opted for takeaway.

I managed to squeeze in a chat with Faizal, and learnt that he was previously working in KL Hilton, but decided to venture into the burger business as it was supposedly more lucrative. According to him, he prefers using pineapple to apples, as apple slices tend to wither and brown when left for too long. “Pineapples are also sweeter than green apples, so it gives the burger an interesting twist of flavour,” he said. Clearly, his theory works in his favour. Rif and I placed an order for a Pineapple Ayam Special and watched as he prepared the burgers. Since he handles everything himself, you might need to wait a bit when the queue is long. 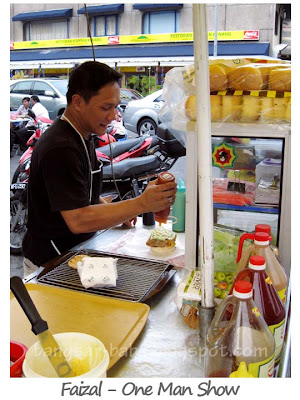 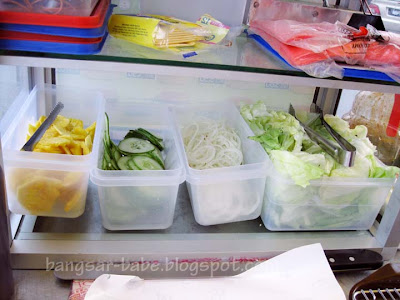 The burger buns are buttered before they hit the grill, so they are crispy on the outside while remaining soft and light inside. His condiments are your usual suspects in a Ramly burger: lettuce, onion, cucumber slices and pineapple slices. 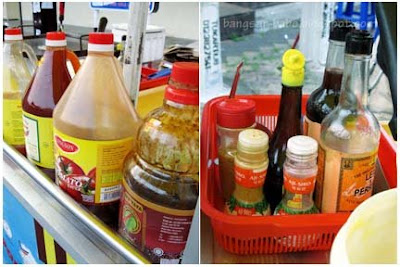 Along with the pineapple slices, the double chicken patties are flavoured with his special seasoning, Worchester sauce and black pepper, and wrapped with egg. The egg-wrapped patty is then sandwiched between a combination of black pepper sauce, chilli sauce, mayonnaise, a slice of cheese, lettuce, onions and burger bun. 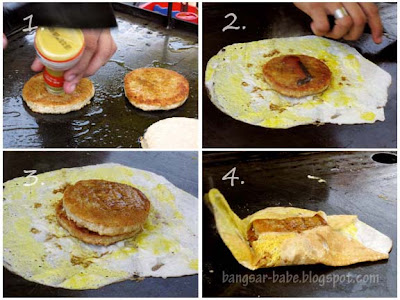 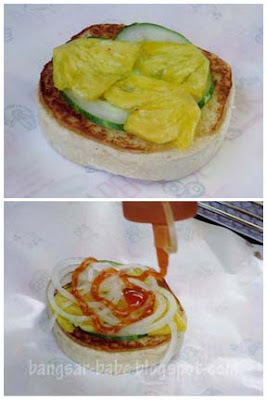 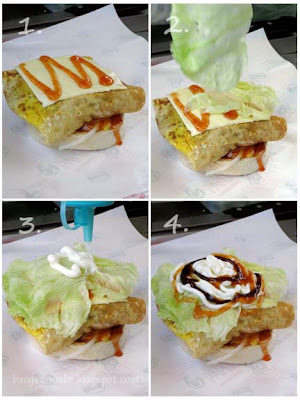 When assembled together, the burger looked rather massive – which was great as I was pretty hungry that evening. It was sloppy, saucy and meaty. And as expected, after the first bite the burger started to collapse (in a good way), and sauces and juices dripped from the sides of my mouth and some down my chin. Soon after, bits of the pineapple and cucumber slices plopped out to join the sloppy mess. I took joy in licking the burger sauce off my fingers and side of my mouth, before using a tissue to properly wipe off the saucy residue. 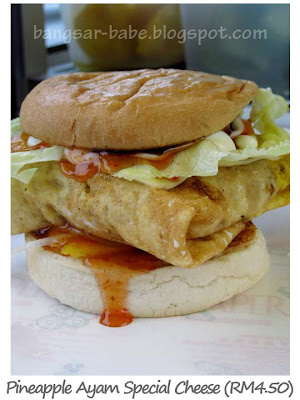 The sweetness of pineapple gave the burger a good balance of sweet and salty flavours, while the egg and cheese added a creamy texture to the burger contents. I reckon the pineapple made the burger juicier, and gave it more bite – pun intended. Very tropical, and kiwi-inspired. I was initially sceptical, as I could not imagine pineapples working well on a Ramly burger. Needless to say, I was happily proven wrong with every bite. It was hard to describe the chemistry of the flavours. Simply put, it was a good combination of interesting flavours, held together by the meatiness of the patty. My only gripe was that he placed the cheese outside the egg-wrapped patty; I like my cheese inside the egg wrap. 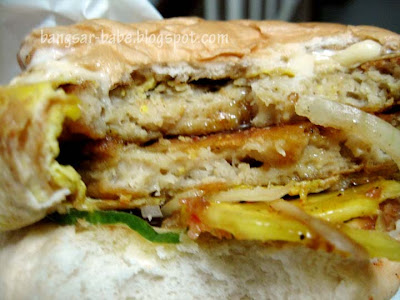 This is one huge burger and only the truly hungry should attempt one. If you’re watching your weight, PLEASE…close this page, or better still, skip your diet plan and go get yourself a big juicy burger! Don’t bother about the calories each bite packs or how it will add inches to your hips, just eat it. I regretted not ordering another one, as despite the monstrous portion, I wanted more. But that would mean joining the queue all over again. And TRUST me, these people don’t order just one burger. 0_o 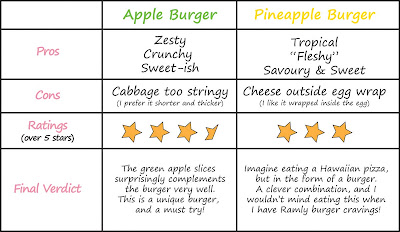 The burgers are both quite good, but what made the green apple burger fare slightly better is the crunchiness of the green apples and the juicy, flavourful patty.

(I would like to thank one of my readers, David Ong, for recommending Faizal’s Pineapple Burger to me. I am always around the area for my butter chicken fix, but it didn’t occur to me to give his burger a try. I’m glad I did! Thank you rif, for taking me all the way to Ampang to look for the green apple burger and for your valuable input in this post.)