I’ve known Paul for slightly over 5 months and found him to be most entertaining. His job nature makes me very, very curious about him and he happens to know a great deal about life. One of the things that fascinate me about Paul is that he is always early. Every time we arrange to meet up, he arrives at least 15mins earlier than the said time.

Over dinner last week, Paul spoke about time keeping. I reached the restaurant on time – at 7.30pm. But according to him, I was late. Puzzled, I questioned him and he explained punctuality to me. The fact that I arrived at the venue at 7.30pm sharp gave me no time or room for “just in case” incidents. What he said made plenty of sense and I’ve gotten him to share his thought here. Hope this will help you the way it has helped me.

“I have better things to do than to hang around waiting for deadbeats to show up!” Well, that’s my creed as far as the topic of punctuality is concerned.

As a working professional, I find that one of the greatest maladies of Malaysian life is tardiness. It’s an insidious bad habit that wrecks havoc with productivity, screws up one’s mood and creates negative impressions of the culprit that are nearly impossible to eradicate.

I see this trait in all segments of Malaysian society, irrespective of racial background. “Why is this problem so prevalent in this country?” I ask myself. My conclusion is that it is due to bad parenting and also non-objection by the general public.

For instance, when was the last time you saw or heard a Malaysian parent berate their child for being tardy? Do you know of any parents who teach their kids to set the time on their watches to 5 or 10 minutes ahead so that the kid would not cut it too close for their appointments?

These things have to be taught for heaven’s sake! We see the typical parent making such a big fuss about their child saying “Please” and “Thank you”, as though that’s what good manners is all about. That’s all a bunch of c#ck, I say. Good manners is about exhibiting respect for others and the clearest sign of lack of respect is to turn up late for an appointment.

My eldest son was once so tardy that when I turned up to fetch him and his brothers for a movie, I drove off with only his brothers whilst he was dilly-dallying upstairs. On top of being left behind, he also got docked the price of the movie ticket! Since then, he has never been late. 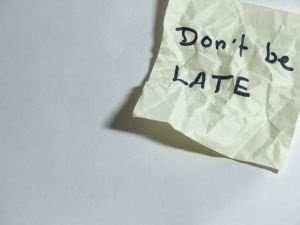 The other thing that fuels Malaysian tardiness is non-objection by the general public. Why are so many of us prepared to suffer in silence when the culprit is clearly screwing with us when he claims that he is “On the way”?

I regularly abandon meeting spots when the client is excessively late. You may call me vindictive, but I wanted to screw up his mood as badly as he did mine!

It’s exceptionally priceless as I would have been replying his lame “on the way” text messages with “It’s ok, take your time”, “It’s OK, I have a magazine to read”…etc. When I realise he’s reaching the rendezvous, I’ll take a hike. Then when he arrives and asks me where I am, I’ll text him saying “Sorry I had to leave. Urgent job to attend to. Couldn’t wait any longer. Let’s discuss by email.” Muahahaa.

Anyway, my point is you have to take a stand if you want the people you deal with regularly to buck up. Good luck!