Of all my close friends, I’ve known Tgin the longest (since we were 7), and he has been there for me through thick and thin. He would do everything he can just to support me, protect me and make me happy. Tgin is also one of my biggest critics, only because he knows I can do better.

Last week over lunch, I casually asked if he would guest blog for me, and he agreed (yay!). So here is his take on New York New York Deli: 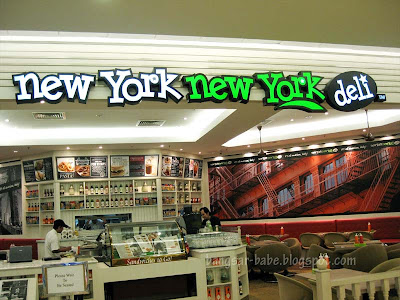 If there is anything about New York New York that would grab you at first instance, it would probably be the décor. The décor is somewhat decent, despite not being a completely accurate representation of a typical New York deli.

Sue Lynn and I ordered a meal and drink each. My meal was the Spaghetti Chicken Alfredo (RM25.90). 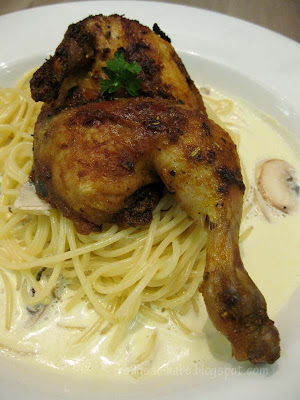 The one food-related thing that my university experience has taught me is this: very few things could go wrong with pre-cooked pasta sauce, as opposed to making your own sauce from scratch (which I consider to be a true measure of one’s ability to cook). This is certainly the case here. The pasta and the sauce by itself were solid; not bad, but then again nothing especial. I could taste the sauce alright; it just lacked the creamy texture that good sauces have. Suffice to say it tasted like pre-cooked pasta sauce, something even I could prepare for a quarter of the price I paid. And that is never a good thing, because my cooking sorta sucks.

The dish’s shortcoming lay in its chicken. It was just plain mediocre. And that’s a crime in a restaurant that charges the prices New York New York Deli does. When I go to a place that’s called something else other than “Tgin’s Kitchen”, I expect to have food that doesn’t taste like something my half-arsed efforts could’ve produced. The roast chicken was just that: No special sauce, no special ingredients, and if the chicken was marinated, I really couldn’t taste it. And by the way, if you’re wondering whether the picture above failed to do the dish any justice, you’d be wrong…It really looks like that in real-life…It really looks like something the chef prepared in anger in order to convey his disgruntlement towards society for not liking his music enough to make him a rock star, causing him to settle for this job which he really hates as the only chicks he’s getting are the ones that come served on a plate…But I digress… 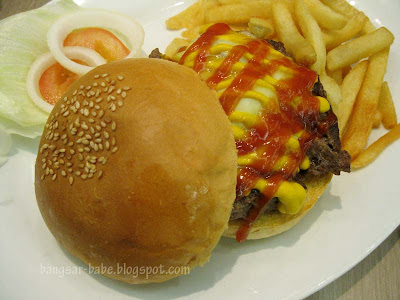 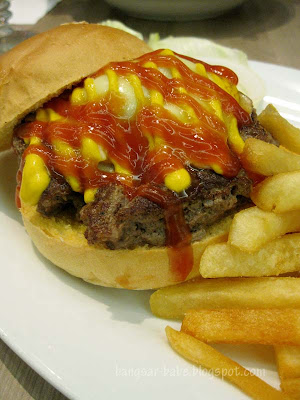 Sue Lynn’s meal was the Mushroom Swiss Burger (RM18.50). Okay, this time around, the pictures do do the dish more justice than it deserves. I’m not sure about anyone else, but it really grinds my gears on a bad day when the burger I’m about to stuff my face with falls apart the moment I grab it. I mean, it’s bad enough that I have to endure the self-loathing guilt as a result of the bad calories this brings; but to endure the guilt and not be able to savour the burger whole? HOW AM I SUPPOSED TO FUEL MY INSECURITIES ENOUGH TO FANTASISE ABOUT ZAC EFRON WHILST LISTENING TO MY COLLECTION OF EMO MUSIC WHEN I CAN’T EVEN GET FAT ON A BURGER BECAUSE IT JUST COLLAPSES WHEN I TOUCH IT???

The bun was weak. It tasted and felt extremely stale, and extremely cheap. And on top of that, it breaks. Like the bones of starving North Korean kids. It breaks like that. I had no complaints about the chips, but I did have a grievance with the beef patty. I’m not sure if you can see it from the pictures, but it does look like roadkill. In fact, it’s almost as though a large rodent of sorts had coincidentally died on a bun, and someone in the kitchen thought it’d be a great way to cut costs by serving that as a cuisine which, in light of any complaints, could be blamed on the current financial crisis. Sometimes presentation does make a difference. But I could forgive bad presentation if the beef patty actually tasted nice. It didn’t. There was just something that wasn’t right with it; it was as though it was overcooked at some parts of the patty, and undercooked at the others. 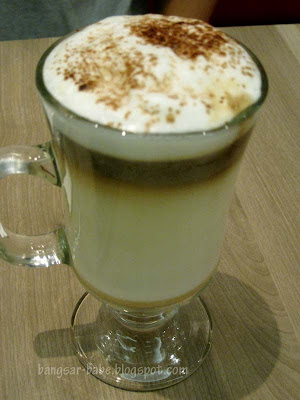 Moving on to the drinks. Being a coffee-addict, I decided to try one of their coffees. I opted for the White Mocha (RM5.90), despite being a Cappuccino man myself. AND NO, CAPPUCCINO IS NOT A GAY MAN’S COFFEE. Anyway, it’s safe to assume that Starbucks and the other coffee franchise giants can breathe a sigh of relief. What I can’t stand about any sweetened coffee, especially flavoured coffee (i.e. Strawberry Coffee, Caramel Coffee, etc), is the overpowering syrupy taste produced by excessive flavouring. And this had it. On top of that, it was weak. And it had no ‘body’, no aroma, and very little flavour. To be very honest, I expected very little from the coffee anyway. 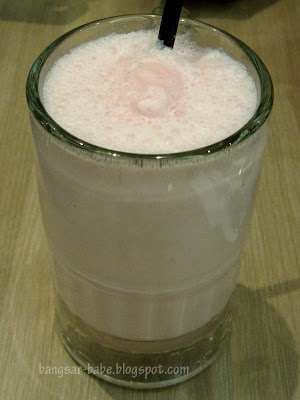 Sue Lynn’s drink of choice was the Strawberry Milkshake (RM8.90). We both agreed that this wasn’t anything different from your standard run-of-the-mill milkshake (in Malaysia). We both found it lacking in the milky department, and the taste was very very average.

New York New York Deli does have one good point. It does have a somewhat expansive variety of foods to choose from. With regards to availability however…well…all that I can say is the crepes I originally wanted to try were…unavailable…Hmm…

Ambience: 5/10
Price: 4/10
Food: 3/10
Verdict: Go if you really have no other alternatives, or if you just really love the taste of mediocrity…Otherwise avoid, and spend your cash on something else.