“Are you free to do lunch tomorrow?” asked my mum. “We’re going for the buffet lunch at Trader’s Hotel”. Mum may be a health freak on most days of the month, but she allows herself (and my dad) a day off every now and then. It is fun to go for buffets with her, because according to dad, she is one of the few people who can match me in eating. Oh well, like mother, like daughter. 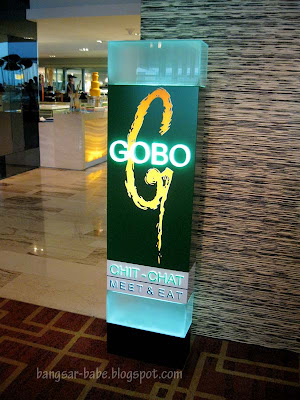 Gobo Chit Chat is located at the 5th floor of Trader’s Hotel, but I never knew about the restaurant until my parents mentioned it. How would I know? People meet there for business lunches and corporate functions, and I’m not in any of these industries. 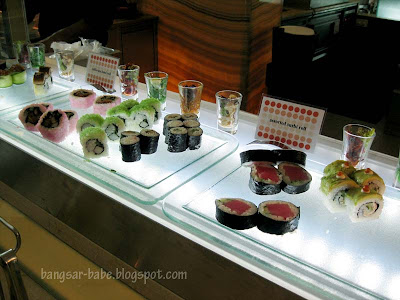 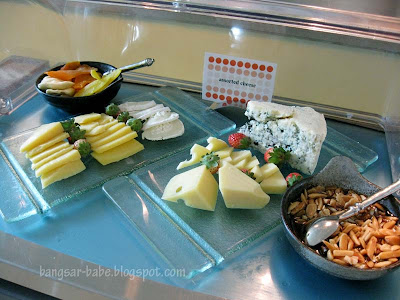 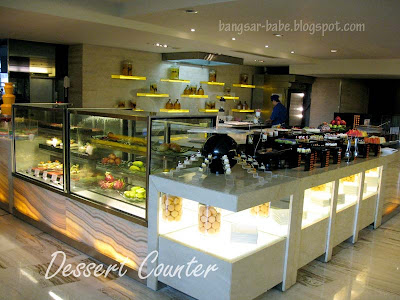 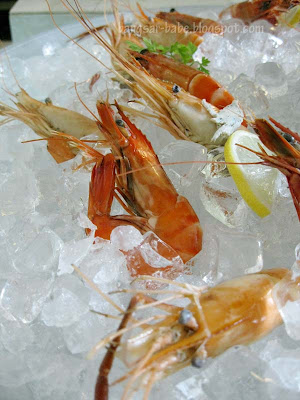 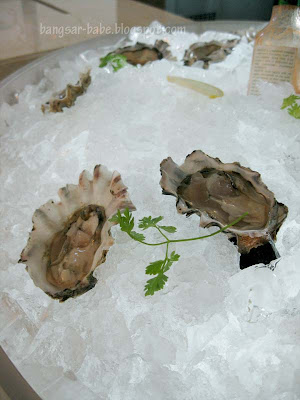 Two lonely oysters left — it was that fresh!

The restaurant had a spacious and casual feel, with its high ceiling and contemporary decor. rif and I were 15 minutes late, and my parents had already started on the oysters and sashimi. The seafood, particularly the oysters and mussels, were fresh, sweet and pleasant to eat. I managed to eat 4 oysters this time; mum outdid me and had slightly more than a dozen. 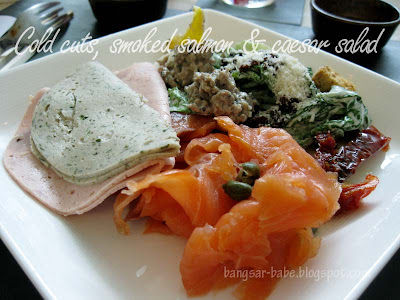 At the assorted sushi roll counter, I bumped into Mrs Loh, my primary school teacher. Mrs Loh taught me Mathematics when I was in school and I always did well. She was slightly surprised with my choice of career (publishing and advertising), whereas rif, the playful one became an auditor. Sorry Mrs Loh, but dealing with numbers would make me puke blood these days. 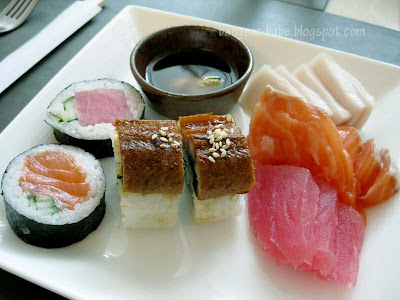 The sashimi selection was limited to a trio of salmon, tuna and butterfish; all were fresh and of decent quality. I wasn’t sure about the roast beef initially, so I took two slices to share with rif. It was not bad — pink in the centre and juicy. I went back for seconds only to find the beef gone and replaced with roast lamb. Attempting to eat that lamb was worst than chewing on an overcooked beef steak. 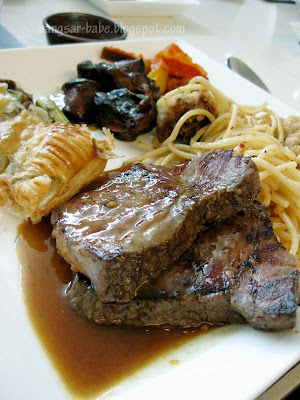 I thought the beef cheek pie was quite good. Tender braised beef cheeks encased in a flaky pie crust, I had two servings of this. Spaghetti aglio olio tasted alright; I would have preferred it with more garlic and herbs. The lamb shank was softly flaky and falling off the bone, but it was a tad gamey. I enjoyed the fondue beef bourguignon. Cooked medium rare, the cheese fondue gave plenty of flavour to an otherwise ordinary piece of meat. 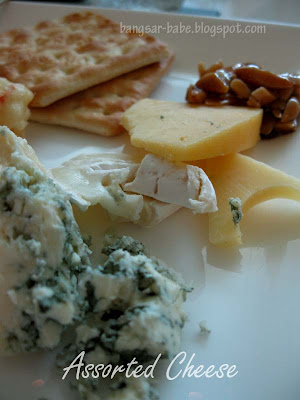 My sister cringed and moved a few inches away from me when I placed my plate of assorted cheese on the table. That girl would only eat kraft and baby bell cheese, and claimed that Blue Brie and Roquefort cheese smelt like old, soiled socks. I say, the more pungent, the better. Just make sure you have breathmints with you at all times. 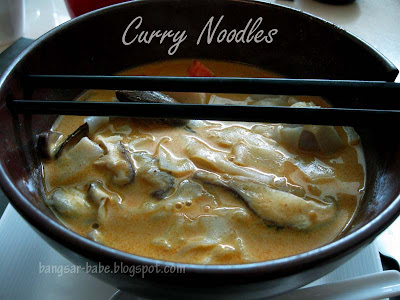 Like most hotel buffets, the dim sums were no good. I should have learnt my lesson by then, but being the stubborn cow I was, I took a piece of siew mai. Most of it ended up in my serviette. The noodles at the noodle station changes every day. When we were there, they served curry noodles, which I thought lacked oomph and coconut milk. 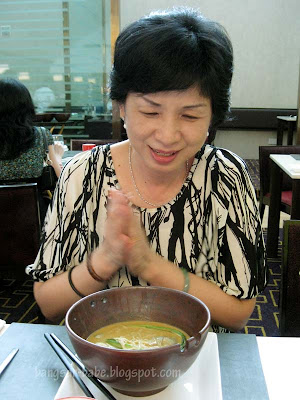 Mum got creative; she removed the fresh oysters and mussels from their shells and placed them in her noodles. I managed to snap a photo of her greedy look when she was about to dig in. 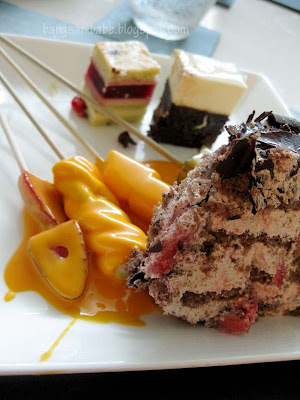 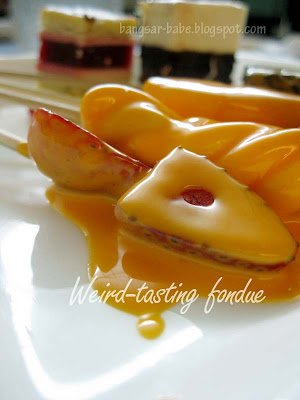 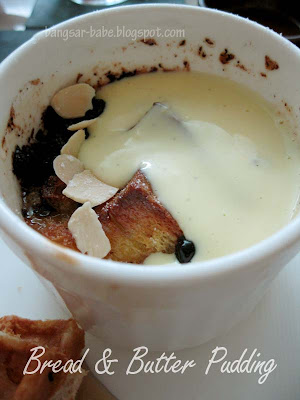 Desserts were limited. Instead of the usual chocolate fondue, there was an orange butterscotch-like fondue that tasted like cough syrup. The bread and butter pudding was decent; creamy, egg-y and scented with vanilla and spices. But the waffles were chewy and the butter was unsalted. Most of the cakes were dry and the mousse-like ones tasted like cheap cream. 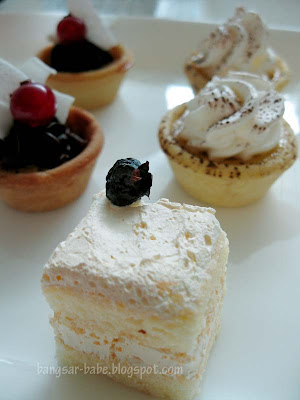 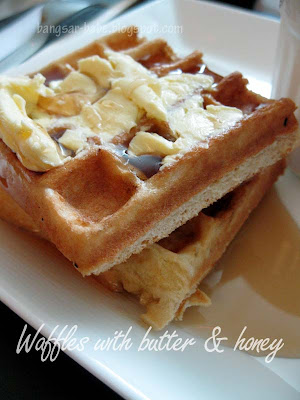 At the ice cream section, I found this conversation between two elderly ladies behind me funny:

Lady A: (pointing at me) See, that girl mashed up her ice cream on a hot plate. How come the ice cream never melt one?

Lady B: I think they freeze the ice cream until it becomes very very hard, then when they put it on the hot plate, it will only melt a bit and become creamy.

Lady A: But I don’t see smoke on the hot plate also. Normally hot plates should have smoke ma… 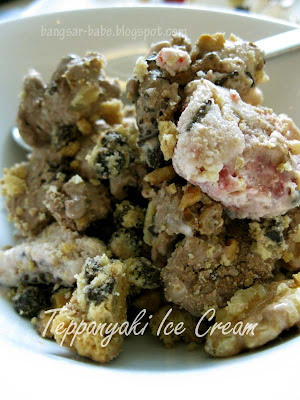 T___T Anyhow, the ice cream wasn’t that good. I reckon it’s the brand of ice cream they used and also the way they mixed the ingredients up.

Lunch was nothing to shout about, and for RM65++ per person, I found it expensive considering the food selection and quality. Service was flawed. Our empty plates were cleared at a tortoise-like pace and getting a cup of coffee was as difficult as finding a parking space in a mall during the sale season.