In the duration of our marriage preparation course, rif and I had two sessions with our support couple – to learn the ropes of marriage and get their valuable input on solving problems. After dating for 8 years, we thought we knew each other inside out. But when our support couple posed a few difficult (and possible) life scenarios, we struggled to solve them. Our different personalities and backgrounds became a problem in dealing with issues. 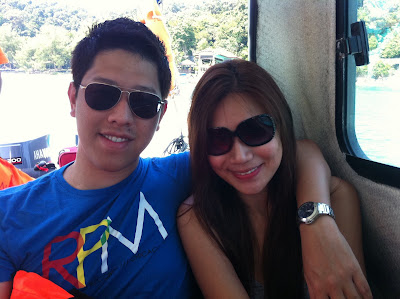 Us at Perhentian Island, after our 8th Anniversary

Over coffee, we talked about finances, life goals, marriage cracks, children, parents and trust. In my opinion, we’re doing ok with finances. Most people who know me would know that I’m quite thrifty with money. And rif is an auditor, so he’s also quite good at budgeting. Our support couple painted a realistic picture of the future – with kids. One of us might have to stay home to care for them while the other brings home the bread. When that happens, we will have to survive with one income. So a lot of adjustments have to be made. It would be good to learn to live with just one income, so that the change isn’t too drastic.

It is important to have similar values and life goals as these will contribute to a healthy marriage. They also talked about trust; not just emotionally, but financially as well. Most couples keep separate bank accounts “just in case” something bad happens. “If you enter a marriage, enter without leaving the back door open,” our support couple said. I think financial backup is something mothers would teach their daughters – to always keep an umbrella/raincoat just in case the storm comes.

We also spoke about religion – rif and I are not from the same religion – and how it might affect our children. That’s still under discussion, but we’ve sort of decided on a solution when the time comes. And as always, communicating with each other is important in preventing ‘cracks’ in a marriage. Over time, there’s bound to be hairline cracks cause by stress, conflict, finances, children, parents…etc. It is always best to face the problems in their early stages than to leave them until there’s no return. Accumulated hairline cracks will lead to collateral damage in the marriage.

At the end of this session, rif and I realized that 8 years isn’t enough to know each other inside out. We’re constantly changing as individuals and it is good to keep up (or at least be in the loop) with the changes in each other’s lives.

*The 11th Run of The Marriage Preparation Course starts this September 24, 2011. If you’re interested, register here. Trust me, it does help in preparing you for marriage.